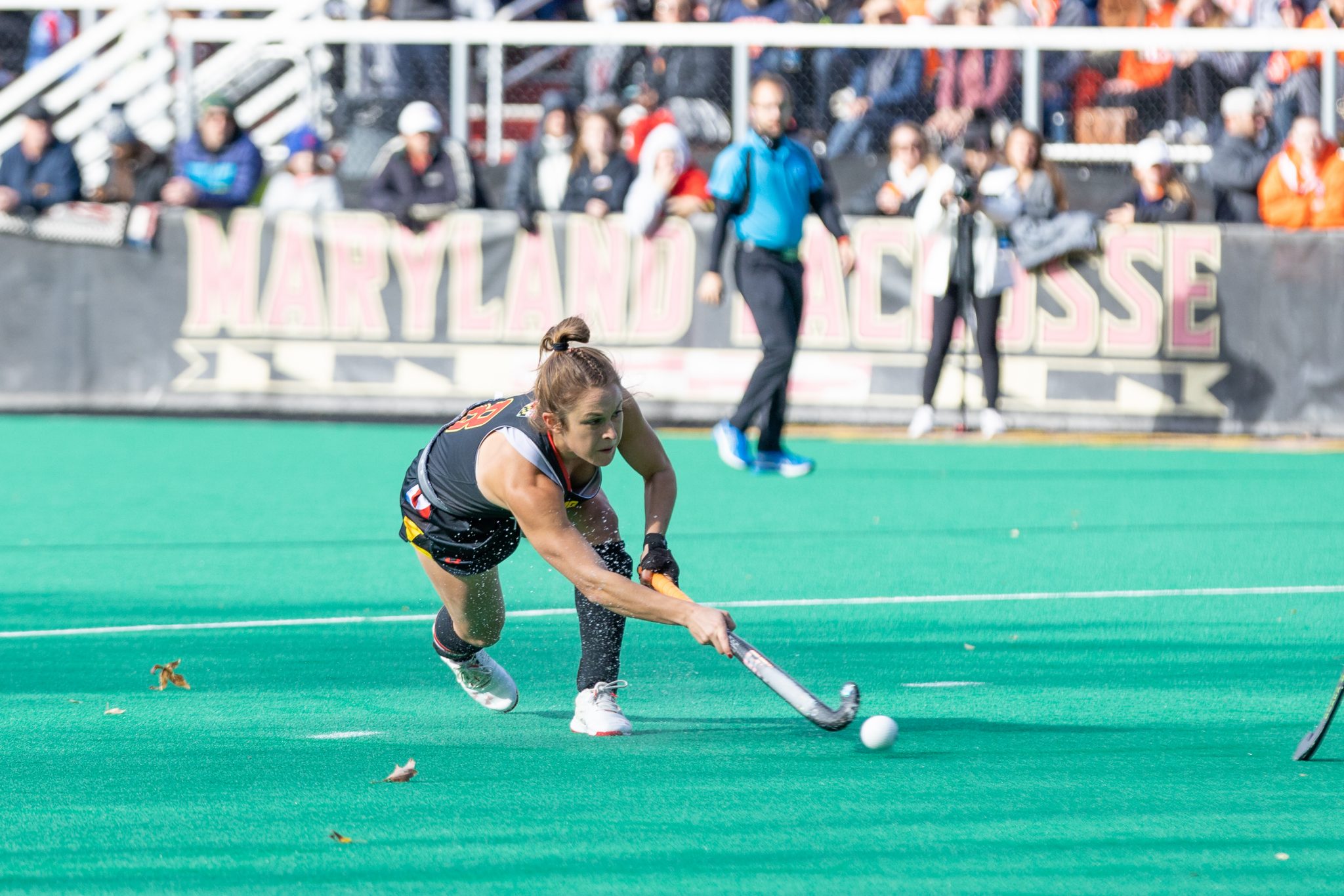 Late in double overtime, Liberty had a two-on-one charge downfield. Kelsey Heltzel fed the ball to Charlotte Vaanhold, who buried her second score of the day.

Maryland field hockey players on the pitch hung their heads in disbelief. The Flames dog piled in celebration as they advanced to their first national championship game in program history.

Each of the top four ranked schools were eliminated in the first and second rounds of the NCAA tournament. And the fifth-ranked Terps made their exit in the Final Four, with a crushing 3-2 double overtime loss to No. 9 Liberty in Ann Arbor, Michigan.

“I couldn’t be more proud of my team and staff for a great battle today,” coach Missy Meharg said.

Maryland pushed on the attack early, firing off a trio of shots — the last of which came off a penalty corner — over the game’s first three minutes.

But Liberty got its offense going quickly as well. The No. 1 offense in the nation this season, the Flames drew a corner less than a minute after the Terps. But Maryland goalkeeper Noelle Frost turned the shot away.

Defenses held each other in check for much of the opening quarter. Over the last five seconds of the first period, Liberty drew two more corners. But both were unsuccessful.

The Flames kept pushing. About five minutes into the second quarter, an effective offensive sequence led to their fourth corner, which they took three shots from. Still, none fell.

The Terps continued turning their offensive series into shots — they took 31 of them on Friday. They earned a couple of penalty corners during the back half of the second quarter, however they couldn’t capitalize.

“We were just not able to finish our shots today,” Bibi Donraadt said. “We brought ourselves into great positions, but final decision making was just not there today.”

Early in the second half, Liberty struck first.

Jill Bolton raced down the pitch, more than a step ahead of defender Rayne Wright. Once Wright caught up to her — Frost came out of her goal and Bolton sent a shot into the back of the net.

As the Flames carried their newfound lead, Maryland failed to get much going. Eventually, they drew a penalty corner, but Riley Donnelly’s shot missed.

Late in the third quarter, Liberty extended its lead.

A shot came flying toward Frost, and the sixth-year netminder kicked the ball up in the air. In prime positionwas Charlotte Vaanhold, who elevated her stick to knock in the Flames’ second score.

Maryland moved the ball downfield, with a series of passes swiftly getting the ball from outside the circle to the endline. Off a deflection, it was none other than the Terps’ leading goal scorer to come through. Donraadt scored her 13th goal of the year to make it a 2-1 ballgame.

With just under five minutes left to play Maryland earned a penalty stroke, getting a crack at the back of the goal with one of its best scorers taking a shot on the keeper.

Meharg tapped Hope Rose for the big moment. And the Big Ten Freshman of the Year rose to the challenge.

“Hope Rose is going to score every penalty corner,” Meharg said. “She’s gonna score. That’s what she does.”

[‘This is it’: Maryland field hockey heads to Final Four for program’s 20th appearance]

The Terps and Flames were knotted at two. And just like Maryland’s previous Final Four game in 2018, overtime was needed to decide a victor.

The Terps drew a penalty corner about six minutes into overtime, but nothing came of it. Liberty earned one less than a minute later and had multiple chances, however Frost came up huge in goal for Maryland.

And the sides went to a second overtime period.

Mayv Clune was flagged with a green card, giving the Flames a seven-on-six advantage. Donraadt was able to get a shot off, but nothing came of it.

Then Liberty had its breakaway. And the Terps’ season ended in heartbreak.

“I’m just proud of the team for how far we’ve come this season,” Riley Donnelly said.