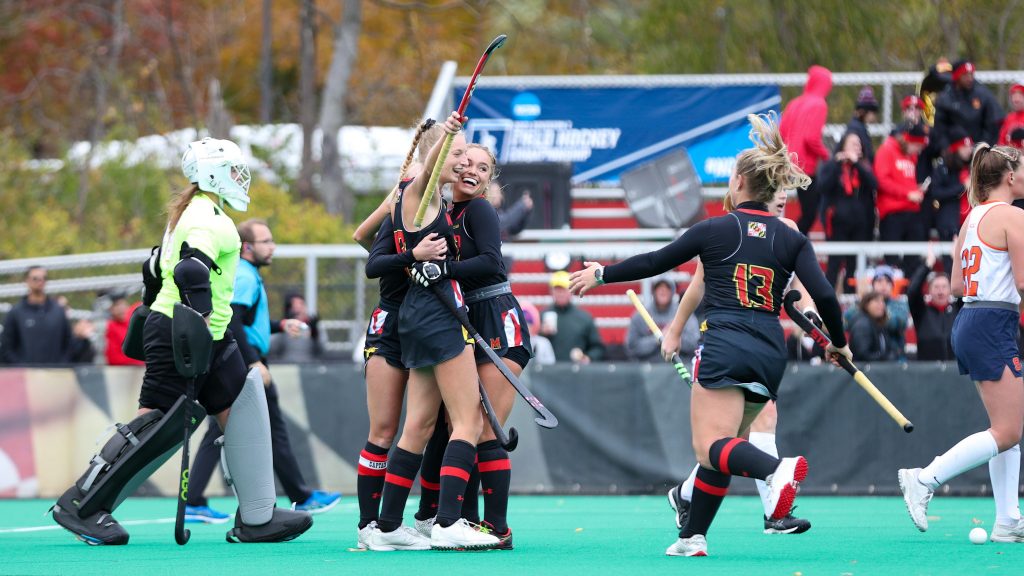 Maryland field hockey sprinted onto the field, hugging each other in celebration. For the 20th time in program history, it will make another appearance as one of the best four field hockey teams in the nation.

Bibi Donraadt has been a key part of Maryland’s attack for her entire career. The senior has already had a number of signature moments, particularly in the postseason.

And she added another to her resume on Sunday. She rocketed a shot into the back of the goal during an intense fourth quarter to recapture a lead the Terps lost less than two minutes prior.

It was all Maryland needed during that fourth quarter. The Terps got past Syracuse, 2-1, and advanced to the Final Four for the first time since 2018.

“It’s such a resilient group of women to coach,” coach Missy Meharg said. “They do as they’re called upon to do.”

The match was tightly contested early on, with both sides only taking one shot over the first quarter. Syracuse (14-6) was the first to try, and Hailey Bitters’ attempt rolled wide of Maryland (15-6) goalkeeper Noelle Frost.

That was how the entire first half went. After 30 minutes, just three shots were on the board across both sides. The ball barely even left the midfield, as both the Terps’ and Orange’s defenses couldn’t have been much stronger.

But it was a different story once they came out of the locker room for the second half.

With the wind blowing and nearly every spot in the bleachers filled, there was a renewed energy for these offenses.

And Maryland’s fifth shot of the day finally crossed the line. Not even three minutes into the second half, Hope Rose sent a pass inside the circle toward Anna Castaldo.

The sophomore stepped up, got ahead of her defender, and jabbed Rose’s pass into the back of the goal.

The Terps celebrated. They took a 1-0 lead over Syracuse.

“Once we could get those strong passes off … we could just build off that,” captain Brooke DeBerdine said. “Once we got out there and just kind of played our game, we felt we could do it and it gave us opportunities.”

At that point, it was a whole new ballgame. Syracuse quickly drove downfield and drew the first penalty corner of the match, before Maryland countered with one of its own.

The Terps held onto their lead for the entire third quarter. And a minute into the fourth, the Orange came close to the equalizer.

Willemijn Boogert’s shot banged off the crossbar, and the action leading to it gave Syracuse a penalty corner — on which it capitalized.

Tess Queen and SJ Quigley set up Eefke Van Den Nieuwhenhof for the shot. And the Dutch sophomore hammered home the shot to knot the match at one.

But as the crowd continued to cheer and the sun dipped behind the clouds on the crisp afternoon, the action intensified. Within two minutes of the Orange’s score, Maryland had its lead back.

And it was none other than the Terps’ leading goal scorer to do the honors. Donraadt handled a pass from Emma DeBerdine and rifled the ball into the back of the goal.

With just under six minutes left, Syracuse used its video referral on a play in the circle. And it paid off — the Orange earned a corner.

But they botched the set off the insertion, and the ball rolled back. They kept control and got off a shot, but it resulted in a kick save by Frost.

But the Terps brought the ball the other way. No shots came off the shorthanded push, but Maryland’s defense held strong under pressure.

And Meharg’s squad maintained its lead. The Terps will return to the Final Four after a three-year absence where they will play Liberty University after it upset No. 1 Rutgers.