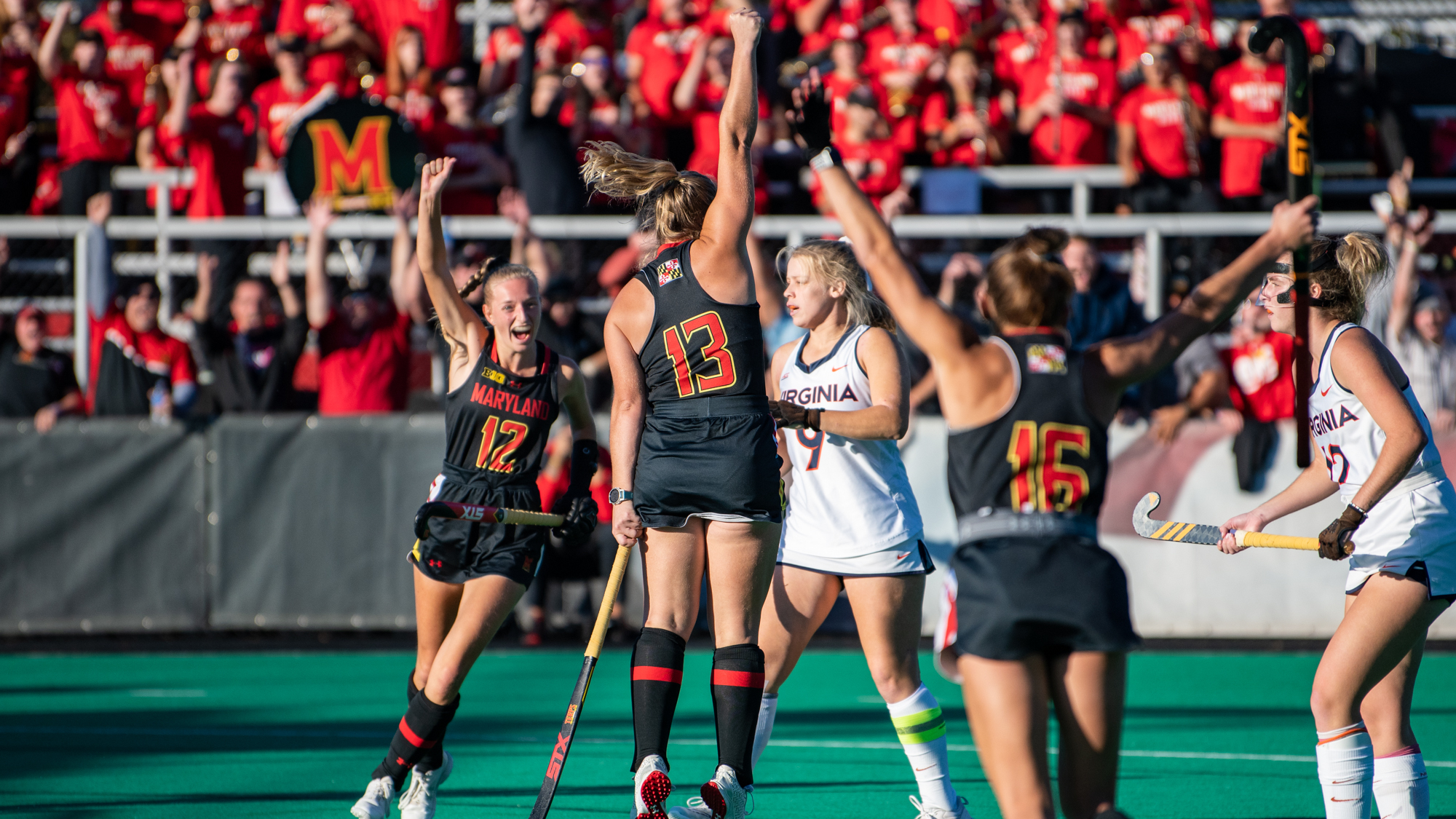 Emma DeBerdine was standing inside the circle after Riley Donnelly missed a penalty corner shot during the third quarter of No. 5 Maryland field hockey’s match on Friday.

The junior watched the rebound closely. She lifted her stick in the air and whacked the ball. It crashed into the back of the goal.

It was the Terps’ second score of the match. And it would be the game-winning goal after the shutout was broken late in the fourth quarter. Maryland got past Virginia, 2-1, to advance to the second round of the NCAA Tournament.

The Terps will host Syracuse on Sunday at the Field Hockey and Lacrosse Complex. They are among the eight remaining schools in the country.

“Never actually done that in a game before today,” Emma DeBerdine said about her goal. “We do anything to get a goal, and we needed to get goals today.”

Virginia (12-9) started pressuring early. It drew a penalty corner a minute and a half into the match, and Meghen Hengerer launched a shot in goalkeeper Noelle Frost’s direction. The ball came close to reaching the back of the goal until defender Rayne Wright slid in and turned it away.

Early in the next period, the stalemate was broken.

Bibi Donraadt fired a strong pass into the circle from deep. Mayv Clune was standing in the middle, and deflected Donraadt’s pass into the back of the goal. The crowd erupted as the Terps gained a 1-0 advantage.

“Being able to play with people that have that game sense and knowledge of how to kind of get the ball in a good position no matter what is great,” Clune said about Donraadt’s feed. “I couldn’t have asked for a better setup.”

Later, it looked like Kyler Greenwalt may have extended Maryland’s lead to 2-0. But her potential score was waved off after review.

So it remained a 1-0 ballgame, and the Cavaliers pushed downfield. They gained a one-woman advantage, as Maura Verleg was flagged with a green card.

But Virginia couldn’t get anything going as coach Missy Meharg’s squad controlled the ball in the backfield.

Early in the second half, the Terps drew a penalty corner. But when Donnelly lowered her stick to flick the ball into the goal, she couldn’t make contact to even attempt the shot.

The Cavaliers continued to give themselves chances to score, drawing a pair of penalty corners over the opening minutes of the second half. But they failed to capitalize on any of their opportunities.

Late in the third quarter, Maryland collected its next score in an emphatic way.

Donnelly missed the shot on a penalty corner, and the ball rebounded into the air. North and to the right of Virginia goalkeeper Tyler Kennedy, Emma DeBerdine raised her stick and knocked the ball into the back of the goal.

The Terps took a 2-0 lead to the fourth quarter, but the Cavaliers weren’t done pushing. Early in the final period, Rachel Robinson got off a shot on a penalty corner. But Frost played it perfectly and turned the ball away.

The atmosphere in College Park was as lively as the Terps have had since 2019. And the players were feeding off it. The Mighty Sound of Maryland started clapping its hands and reciting the Maryland Victory Song as Virginia worked with the ball on the Terps’ side of the pitch. The massive crowd was electric, as it had been throughout the match.

“Having the energy and support, from in the stands to on the sidelines, and certainly the band and Testudo being here gives you that feeling, that dominance,” Meharg said.

With just under three minutes left, Virginia looked to make its 12th shot of the day. And it did.

Off a penalty corner, Adele Iacobucci delivered the Cavaliers’ much-needed score. The Virginia bench erupted. With two-and-a-half minutes to play, it cut the Terps’ lead in half.

The Cavaliers pulled their goalie and moved the ball back downfield. But nothing came of it. And Maryland earned a date with Syracuse on Sunday.