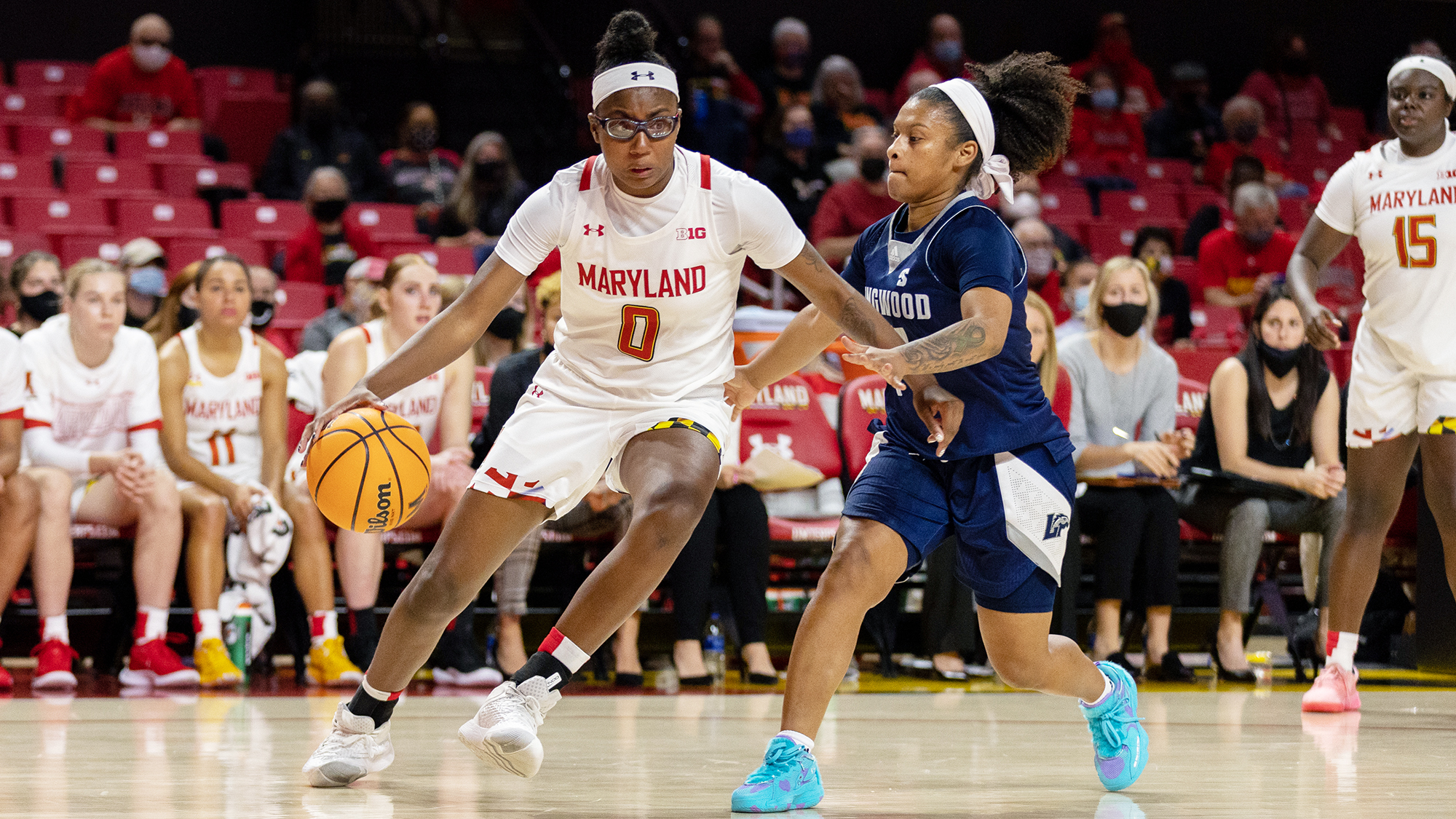 After averaging 90.8 points per game last season, Maryland women’s basketball picked up right where it left off by piling on 97 points in its season opener against Longwood.

With practically their entire rotation returning, it’s no surprise the Terps looked as efficient as they did versus the Lancers. A plus-28 points in the paint differential highlighted the lopsided affair, with 22 points off turnovers acting as a complementary piece.

“We tried to speed them up,” Mimi Collins said. “We’re one of the biggest teams in the country, so when we used our length and just got into the gaps and did what we were supposed to do, we sped them up and got the stops we needed.”

But even with the rotation facing minimal changes, the season opener had some missing links. Diamond Miller was inactive as she nursed a knee injury, while Chloe Bibby struggled in her 29 minutes of action, tallying just two points and failing to convert from the field.

Despite Miller’s absence and Bibby’s off night, Maryland managed to exceed its scoring average from the 2020-21 season in Tuesday’s game thanks to others picking up the slack — namely Angel Reese and Shyanne Sellers.

Miller and Bibby were two of the top three scorers from last season, but Reese was able to fill the scoring void by putting up a team-high 21 points to go along with 14 boards.

The sophomore was instrumental in offering the Terps plenty of second chances, as she collected more offensive rebounds, at eight, than defensive rebounds, at six. Reese did most of her work in the second half with 14 points, helping Maryland pull away.

“I know if I can do anything, I can rebound,” Reese said. “I think my rebounds helped me get to my baskets.”

While Reese’s stellar performance stood out, Sellers was a catalyst off the bench in her college debut. The freshman from Aurora, Ohio, placed just behind Reese in the scoring column with 17 points on 7-for-12 shooting and 60 percent from deep.

Sellers logged 29 minutes in her debut, supplying the Terps’ bench with more than half of its 31 points. ESPN’s No. 22 recruit from the class of 2021 proved that her scoring prowess can transfer seamlessly to the collegiate level, giving head coach Brenda Frese another weapon to add to her arsenal.

“I thought she was fearless, I thought she was confident and she belonged,” Frese said. “That’s what you need to be able to have, especially with Diamond out now. She’s getting some really valuable minutes to kind of build that trust with the coaching staff and her teammates.”

The pair of underclassmen shined in place of Miller and Bibby. They proved that on days where Maryland’s star players are struggling to find their shot or are forced to miss action due to injury, they are more than capable of rising to the occasion.

A fully healthy Terps squad pushes Reese to the second unit alongside Sellers, but the two dynamic pieces should be able to garner starter-level minutes on a consistent basis as the season moves along.

Through one game, Reese and Sellers lead the fourth-ranked team in the country in scoring. That in itself is a testament to the depth that Maryland boasts in its quest for a national championship.