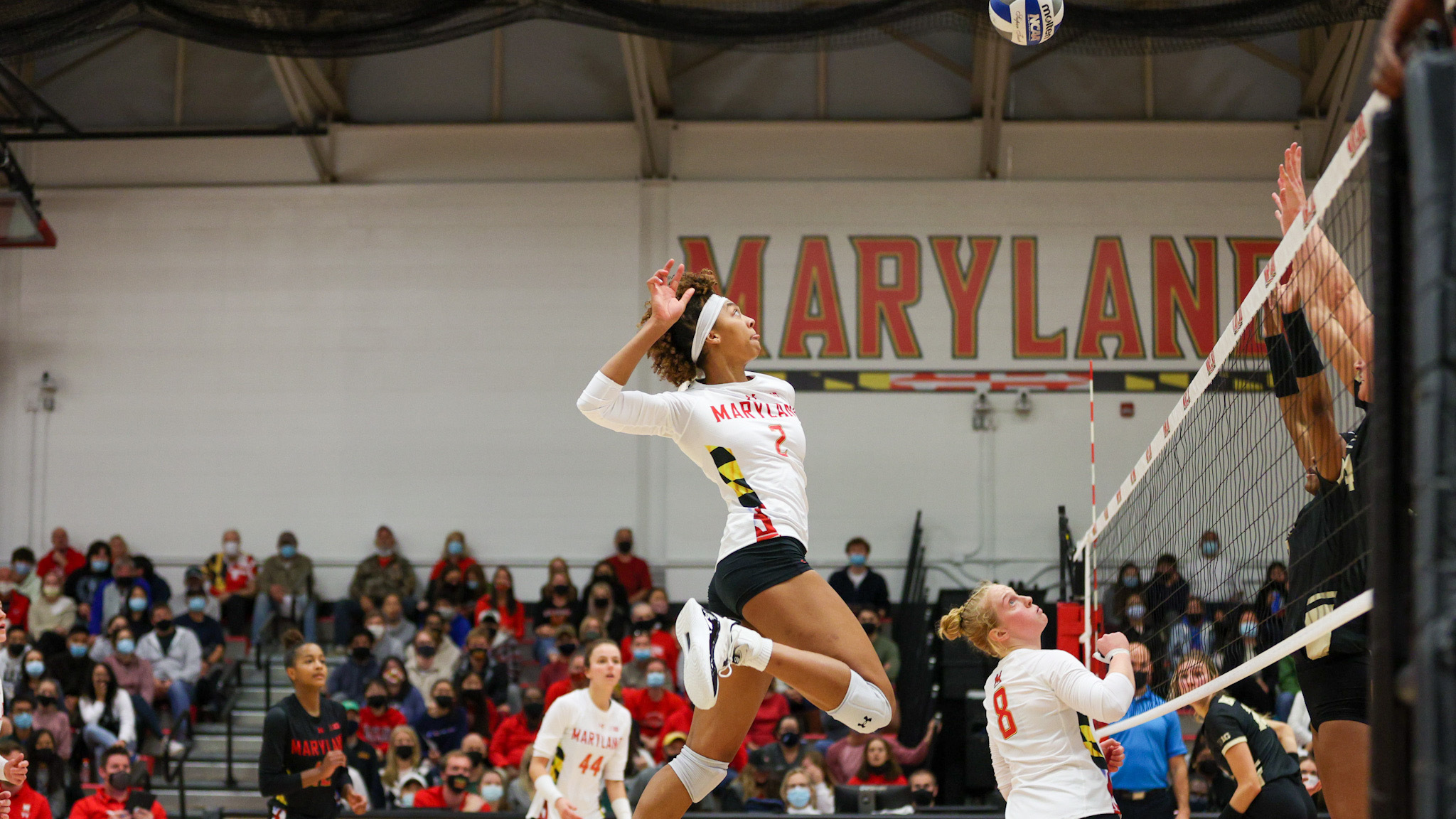 Rainelle Jones rises for a kill during Maryland volleyball's 3-1 loss to No. 8 Purdue on Nov. 5, 2021. (Cam Andrews/The Diamondback)

It was a race to two in College Park.

After a furious Purdue comeback gave the visiting Boilermakers a one-point advantage, a clutch kill from Maryland middle blocker Rainelle Jones knotted the fourth set at 25-25.

“I will give the group credit, I thought they did a good job rallying,” coach Adam Hughes said. “There’s a chance there we could’ve gotten two of those sets, had leads in a couple of them but let them slip away.”

Fresh off a dominant four-set victory over No. 4 Wisconsin, Purdue looked to carry its momentum into College Park early in Friday night’s slugfest.

Cleveland got the ball rolling for coach Dave Shondell’s squad in the opening frame, pummelling home a crosscourt kill on the first point of the match to set the Boilermakers’ bench ablaze.

Purdue found its offensive rhythm early in the contest, powering home 14 kills and six service aces to push the pace of the Big Ten battle.

And while the Boilermakers swiftly found the holes in Maryland’s block, the Terps’ offense sputtered in the opening set.

Purdue’s size and strength at the net gave Hughes’ squad fits early, as a bevy of high-powered Maryland attacks were walled at the net by the duo of Jael Johnson and Emma Ellis. The Terps, who posted 40 kills in three sets against Rutgers, finished with just five spikes in the first frame of Friday’s battle.

“I didn’t think we started on time,” Hughes said. “I thought we were very, very slow out of the gate, and you can’t give someone confidence in our gym that fast.”

Spurred by a late outburst from outside hitter Caitlyn Newton, the Boilermakers rattled off nine of the final 10 points of the first set to waltz to a comfortable 25-15 victory.

But after dropping six of the first seven points of the second frame, Maryland soon found its footing.

Back-to-back Jones spikes prompted a five-point swing to level the set at seven apiece. A once stagnant Terps offense suddenly came to life, as outside hitters Sam Csire and Paula Neciporuka began locating the cracks in Purdue’s rigid block.

Three Neciporuka service aces in quick succession midway through the frame helped garner Maryland a three-point advantage, as Shondell burned his first timeout to try and stop the bleeding.

“We obviously knew that they were very [good] defensively and offensively. They have a lot of big hitters,” defensive specialist Kaylee Thomas said.

And suddenly, the Terps were in danger of being swept at home for the first time this season.

Both teams traded blows as the third set progressed. Neither squad wished to budge in front of the rowdy Xfinity Center Pavilion crowd.

But after a three-point Purdue run forced a Maryland timeout, Jones took complete control of the back-and-forth frame.

Coming out of the timeout with a renewed sense of urgency, Jones punched home her eighth kill of the match to knot the set at 21-21. Two more Jones block assists in the subsequent three points flipped the script on the Boilermakers, allowing Neciporuka to finish the job in a 25-22 third set win.

“I thought it was a nice performance in the third to wash what happened in the second,” Hughes said. “Use that momentum a little bit and kind of propel us to give us a chance to win the match.”

Maryland almost pushed the match to a deciding fifth set, rattling off eight points late in the fourth set to push Purdue to the brink.

“I’m proud of how we fought,” Thomas said. “If there is ever a preferred way to lose, it is for us to go out swinging, and leave it out on the court, and I felt like [we] did that.”