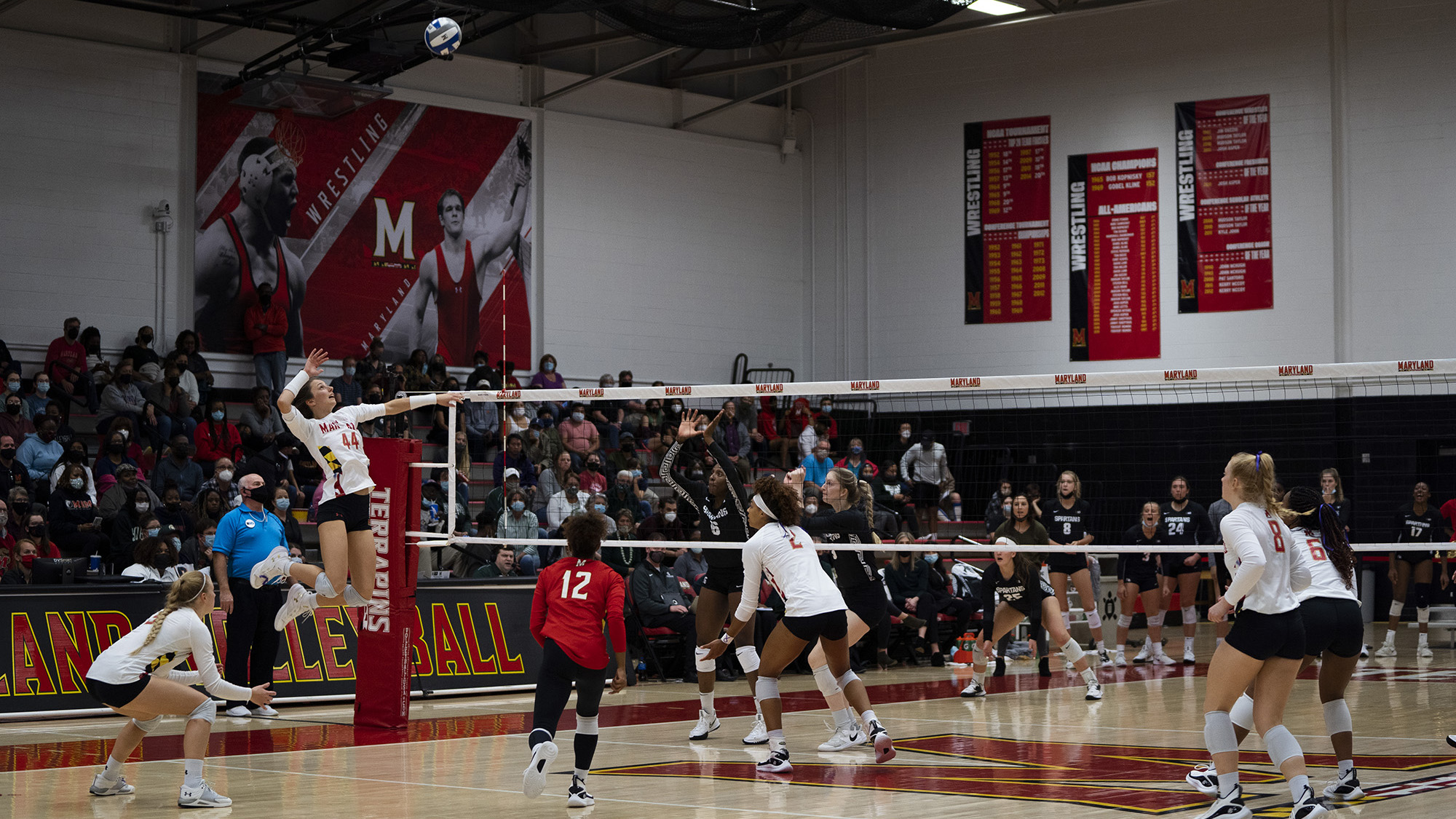 Sam Csire goes up for a spike during Maryland volleyball’s 3-1 win over Michigan State on Oct. 23, 2021. (Taneen Momeni/The Diamondback)

Hungry for their 18th win, the Terps thrashed Rutgers with one of their most efficient all-around performances of the season. Coach Adam Hughes’ squad clocked 40 kills and just four attack errors on the evening while simultaneously stifling the Scarlet Knights’ attack with 10 rejections at the net.

“I thought we played pretty well defensively against Rutgers,” Hughes said. “I [also] thought we were pretty good in serve-receive.”

But while Hughes and the Terps are seemingly riding high with just two victories standing in the way of a 20-win season, the road doesn’t get any easier as the season winds down.

Now back in College Park, the Terps will host No. 8 Purdue and Michigan this weekend. The Boilermakers, fresh off of a 3-1 victory over No. 4 Wisconsin, will look to match Maryland’s physicality with its potent defense.

“They’re really good defensively,” Hughes said of Purdue. “We’re the two top blocking teams in the Big Ten at least if you look at blocks per set.”

Led by coach Dave Shondell, the Boilermakers boast a bevy of two-way players that wreak havoc on both sides of the ball. Outside hitter Grace Cleveland notched 15 kills along with seven blocks in Purdue’s win over the Badgers, while fifth-year outside hitter Caitlyn Newton led all scorers with 17 spikes in the battle.

For Maryland outside hitter Sam Csire, slowing Purdue’s offensive roll will be paramount in pulling an upset on the visiting Boilermakers.

“I think we just need to focus on how to not stop their hitters, but kind of maintain them,” Csire said. “You can’t let one of them go off on a crazy kill streak.”

Following their battle with Purdue on Friday evening, Maryland will host the Michigan Wolverines in a Sunday afternoon matinee. The Terps will have less than two days to shift gears for yet another dynamic conference foe that has already swept them this season.

“I think [in] that Michigan game we didn’t play a lot like ourselves,” Csire said of the loss. “We were down in moments that we shouldn’t have been down.”

Michigan’s defense was difficult to handle in Maryland’s first meeting with the Wolverines — they held Hughes’ squad to an uncharacteristically inefficient .173 hitting percentage in the match. Attackers Paige Jones and Jess Mruzik combined for 32 kills in just three sets of action to shred the Terps’ block in a comfortable 3-0 victory.

But for Csire and the Terps, their upcoming Big Ten battles are just another chance to prove to the nation they belong in a conference brimming with elite volleyball programs.

And while the task of hosting two powerhouse programs may seem daunting, Csire isn’t struck by either squad.

“I would say we’re really confident,” Csire said. “I think these next two matches can help us bring that whole ‘shock the world’ kind of vibe.”