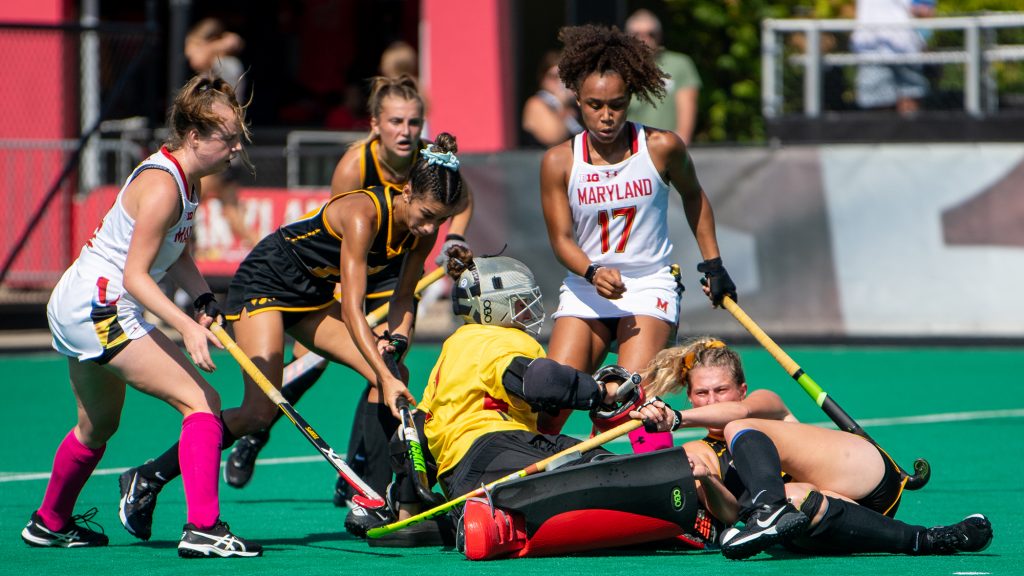 Going blow for blow through the first three quarters, Maryland field hockey and Penn State were locked at two going into the final period of regular time.

Following a quiet third quarter, Anna Simon was quick to seal the deal for her Nittany Lions, scoring in the opening 30 seconds of the fourth quarter with a rebound goal to give her side a 3-2 lead over the Terps that would be enough to see out a victory.

It was Simon’s third goal of the match that sent Maryland home with an early exit from the Big Ten tournament in a gritty affair between two of the top teams in the country.

“Everybody is disappointed, certainly the team,” coach Missy Meharg said. “We just didn’t come ready with the intensity we needed today.”

After coming off of a four-game win streak to finish off the regular season, Meharg’s squad was faced with its biggest game to date when they faced the Nittany Lions in the quarterfinals of the Big Ten tournament in Piscataway, New Jersey.

[Margot Lawn grew up a Maryland field hockey fan. Now, she plays on the team.]

Even more, the team was short-handed on players, with midfielders Kyler Greenwalt, Nathalie Fletcher, and Taylor Mason all out for the match due to injury.

“In a good way for them and the team, we have some more time now to get them fit and get them physically back playing,” Meharg said. “We’ve been 16 deep and today we were 13, and that significantly impacts your outcome.”

Opportunities presented themselves early, as Terp midfielder Emma DeBerdine had two corner chances,  however both were saved by Penn State’s goalie. But, Maryland would not be denied, as they opened play up with a goal midway through the first quarter from Bibi Donraadt that was assisted by Riley Donnely off of its third corner of the game.

Simon tied the game soon after with an inside-outside shot on a set corner to give herself and the Nittany Lions their first goal of the game.

Penn State gave the Terps another scare early in the second quarter after a pair of high shots were sent toward goalkeeper Noelle Frost. She saved the first, but the second appeared to have got past her.

But, after a review of the play, it was deemed the second shot, which was initially thought to have rifled through the top right of the goal, hit the outside of the net. Maryland was bailed out — for the time being.

Partway through the second quarter Hope Rose, the Big Ten Freshman of the Year, netted her ninth goal after smashing a shot from far out, giving the Terps another lead, this time at 2-1.

Maryland looked to be content to take its slight edge over the Nittany Lions into the half — Simon had different thoughts.

With less than two minutes left in the second quarter, Simon responded by netting her second goal with a reverse stick shot off of a rebound on a corner, tying the game up at two apiece.

Then, early in the fourth quarter, Simon finally put the game away with a third goal to take the lead, securing Penn State a 3-2 win over the Terps.

Maryland, ranked No. 6 in the nation, should still be set to compete in the NCAA tournament. However, an early dismissal from the Big Ten tournament did nothing to bolster its résumé.

“We will get ourselves together and see where we fall in the NCAAs,” Meharg said.