Margot Lawn grew up a Maryland field hockey fan. Now, she plays on the team. 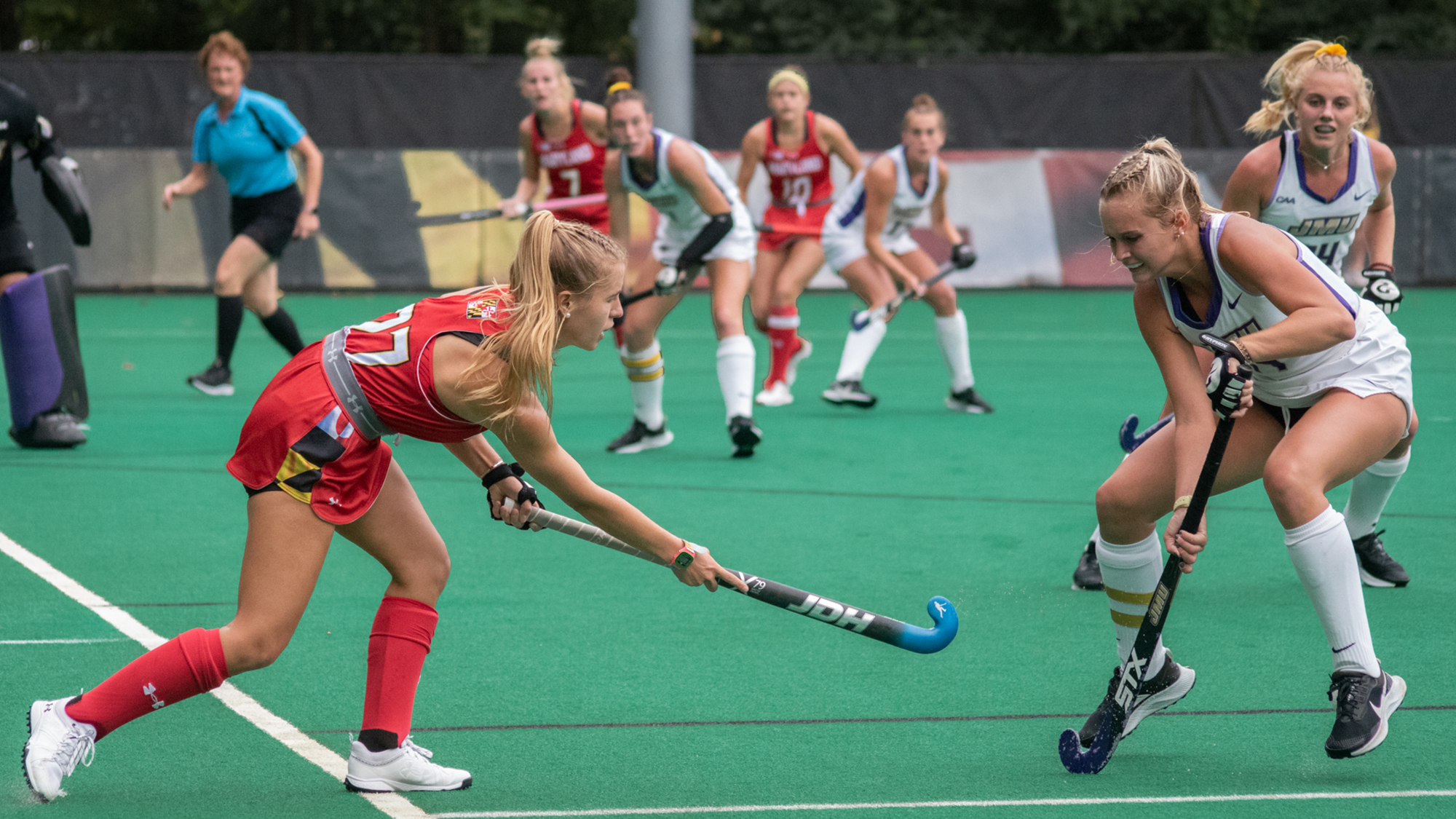 Maryland's Margot Lawn battles with a James Madison defender during the Terps' 3-0 win over the Dukes on Oct. 10, 2021. (Autumn Hengen/The Diamondback)

As a young girl, the Pasadena, Maryland, native served as a ball girl for the Terps during games when her club or recreational teams visited College Park.

This week, she’ll play in a high-level match of her own. On Thursday, Lawn and the sixth-ranked Terps take on No. 3 seed Penn State in the first round of the Big Ten tournament in Piscataway, New Jersey.

“To come back and have that similar atmosphere is really humbling,” Lawn said. “You start at such a young age and then you make it to the big scale at Division I, it’s an amazing feeling.”

She always knew she wanted to play collegiate field hockey. But it took a couple years for her to make it back home.

Lawn spent her first two seasons at Louisville, where she scored eight goals across the Cardinals’ fall 2019 and truncated fall 2020 campaigns.

“They were really good businessmen,” Lawn said about why she left her home state for a different top-10 field hockey program. “I always had this feeling in my gut that I was maybe not making the best decision.”

Lawn entered the transfer portal midway through her sophomore year in Kentucky. And she quickly received a phone call from Maryland coach Missy Meharg asking if she wanted to come play at the school she grew up loving.

Before committing to Louisville, the Terps were Lawn’s other finalist. And they wanted her just as much as she wanted them.

“I’ve known Margot since she was five or six years old,” Meharg said. “Margot is very, very cognitive about the game.”

Lawn was with the team last spring but couldn’t play because of NCAA transfer rules. And she’s thrived in her first season competing with the team for which she was once a ball girl.

She scored five goals in the regular season — tied with Emma DeBerdine for third on the team — and added six assists.

“She’s definitely grown in connection with others, which has been very good for our team,” captain Brooke DeBerdine said. “She’s great in the circle with her hands.”

Lawn was far from the only newcomer on Meharg’s roster this fall. Along with fellow transfer Julianna Tornetta, the Terps also had a strong freshman class, including Big Ten Freshman of the Year Hope Rose.

And throughout the season, Lawn’s impressed everyone around her.

“Her hard work, in practice and in the games, really helps the team,” Rose said.

As a forward, Rose has worked with Lawn frequently this season. She said Lawn always knows her pressing lines and how to draw penalty corners when the ball is in the circle. And she can always move around her defender to take a quick shot.

Overall, the Archbishop Spalding alumna is back where she belongs. Not only did she aspire to be a Terp, but she’s flourishing now that she has the opportunity to suit up for the black, red and gold.

“She’s grown every day … it’s become a really, really great home for her,” Meharg said. “Her hockey and her whole energy have been nothing but positive for the whole team.”