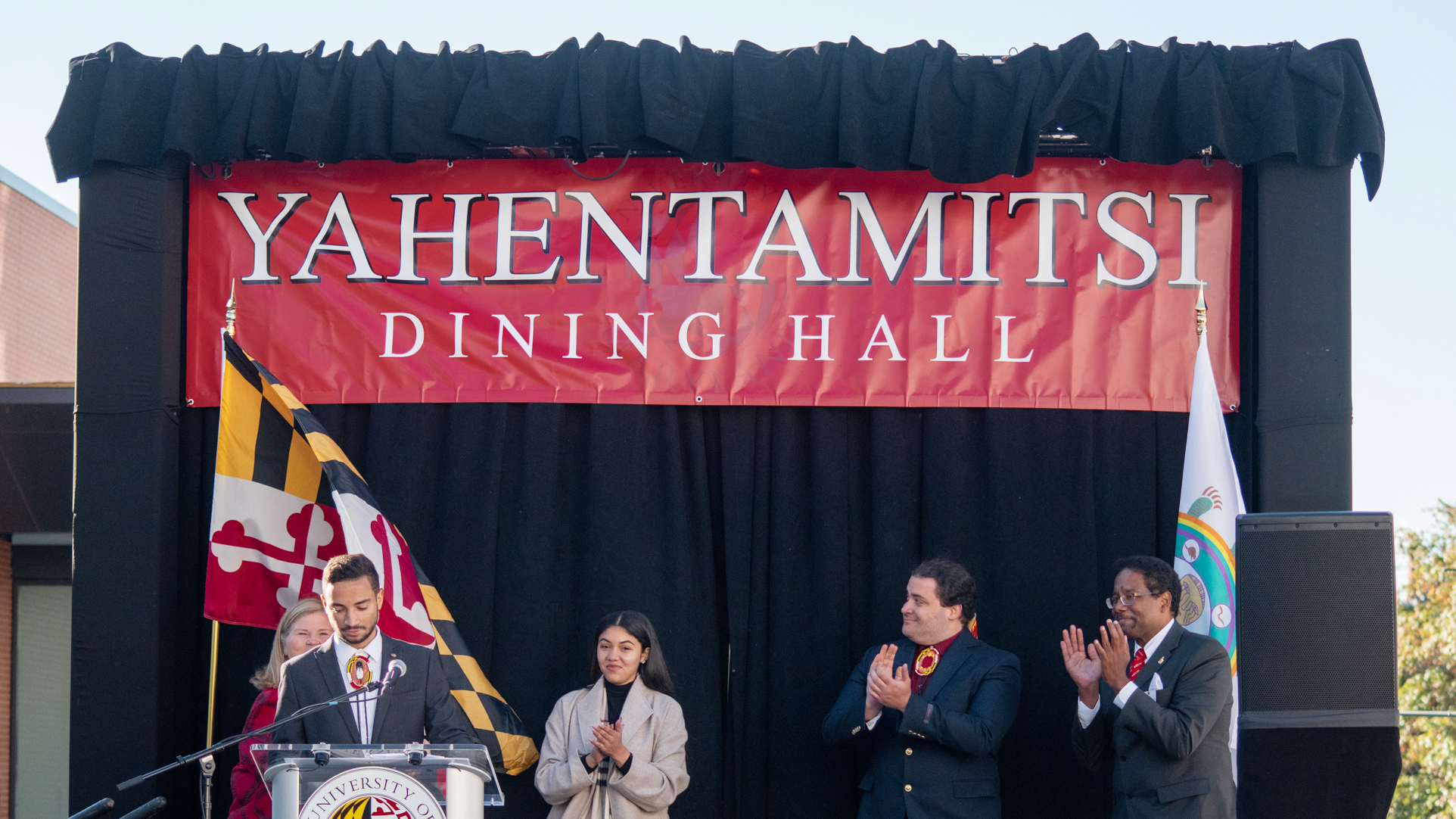 Yahentamitsi was revealed as the name of the new dining hall to honor the Piscataway Tribe on Nov. 1, 2021. (Autumn Hengen/The Diamondback)

A new dining hall at the University of Maryland named in honor of the Piscataway Tribe is the first campus building to pay tribute to Native American heritage.

At a ground blessing ceremony on Monday — the first day of Native American Indigenous Heritage Month — the university announced the dining hall will be named Yahentamitsi (Yah-hen-tuh-meet-c), which means “a place to go to eat” in the Algonquian language spoken by the Piscataway Conoy Tribe.

The Piscataway people were among the first in the Western Hemisphere but had their land stolen from them by European colonists, according to the diversity and inclusion office. Later, this university was built on that stolen land.

The choice to honor the Piscataway tribe with the name of the new dining hall originated from a student survey last year, said Patty Perillo, student affairs vice president. Since then, the university has worked with students, faculty, staff, the American Indian Student Union, Piscataway elders and tribal members spanning multiple generations to come up with a name.

To bless the area, Proctor set items such as tobacco, sage and sweetgrass on fire and allowed the smoke to be carried up into the air. As the smoke ascended, Proctor prayed for protection, respect, the removal of all that is harmful to the area and for those that enter the areas to be blessed and taken care of.

The sacred belief is that as the smoke rises, it carries these prayers to the Creator.

“It’s very fitting to have these three generations partaking in such a momentous occasion of cultural events,” said Keith Colston, who is Tuscarora, a member of the Lumbee tribe and the director of ethnic commissions in the Maryland governor’s community initiatives office.

“Kota” Harley, who emceed the ground blessing, said the name helps to pass down cultures and traditions to the younger Native American generations.

University President Darryll Pines also spoke at the event, emphasizing the importance of honoring the people whose land the university is built on.

“Unless we consciously look for these opportunities, we don’t often get them or the chance to collectively adjust our cultural lens,” Pines said.

Jeremy Harley, treasurer of the American Indian Student Union and a member of the Piscataway tribe, said that naming the dining hall in honor of his tribe aligns with traditional Piscataway values.

“The Piscataway traditions assure that food is shared via equitable distribution,” the junior computer science major said. “The name speaks to the process of gathering to eat and community and the distribution of food particularly in times of food insecurity.”

The Yahentamitsi dining hall is set to open in fall 2022 and is the first dining hall built on campus in nearly 50 years. The 60,000 square-foot hall will seat 1,000 people, have gender neutral bathrooms and include an outdoor dining balcony that overlooks the practice fields and Maryland Stadium, according to a news release from the university.