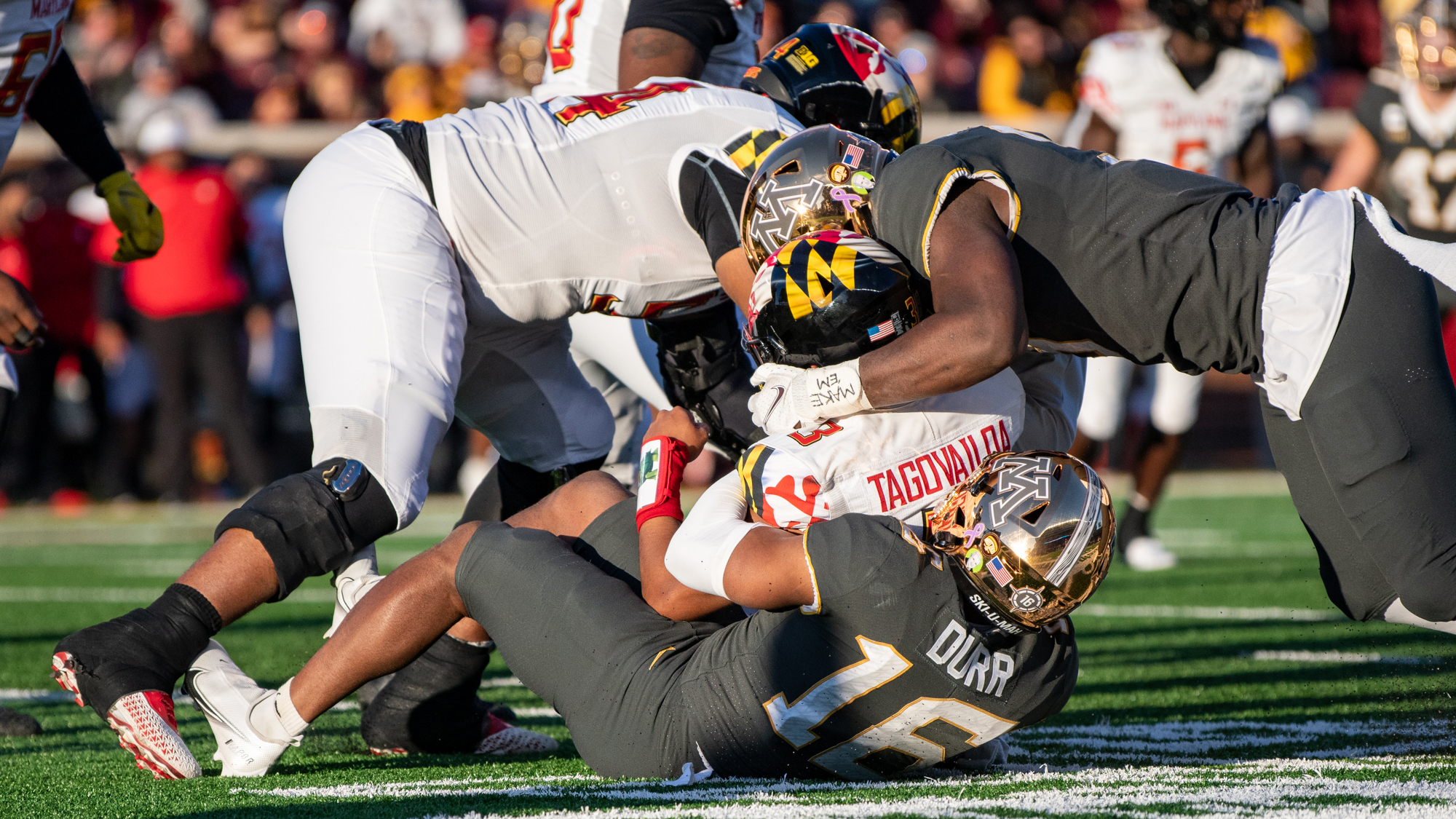 Taulia Tagovailoa is sacked by a swarm of Gophers during Maryland football's 34-16 loss to Minnesota on Oct. 23, 2021. (Joe Ryan/The Diamondback)

Maryland football’s season is teetering on the edge.

Slumping through a winless October after a perfect September, the Terps are staring down a daunting schedule to end their season that threatens to send them spiraling to a meek end. That makes Saturday’s contest against Indiana all the more vital.

Maryland is on an all-too-familiar three-game losing streak, with three straight ranked opponents following this weekend’s matchup. If the Terps want to stabilize their season, it needs to happen against the Hoosiers.

But breaking lengthy win droughts has been difficult for Maryland in past seasons. Since joining the Big Ten in 2014, the Terps have recorded seven losing streaks of at least three games, or about one per season.

That’s more than their previous 13 seasons in the ACC, when they registered six such skids. The frequency of these large blocks of losses has increased due to the level of competition — more than half of Maryland’s losses in these extended losing streaks in the Big Ten are to ranked teams — but also to extenuating circumstances, especially injury.

Those factors are once again at play in 2021. The Terps’ conference gauntlet has exposed their flaws and cemented their position as a middle-to-lower tier Big Ten team. Injuries at key spots, including wide receiver, defensive back and linebacker, have dilapidated their depth and turned a once efficient enterprise into an inconsistent attack.

The danger for Maryland is that these issues could ruin yet another campaign. In the past 20 years, all but two of the team’s three-plus-game losing streaks extended into November. After a 4-0 start, that could again become a reality for the Terps.

“It’s not really what they do, it’s what we do,” coach Mike Locksley said. “We better get the things that we haven’t been able to correct, corrected.”

Maryland’s not the only team in such a position, though. Indiana enters Saturday’s game similarly banged up and struggling thanks to one of the country’s toughest schedules.

The Hoosiers are on a three-game losing streak of their own and have yet to win a Big Ten game. Now that they’re facing an opponent of similar stature, they could be more competitive. And the Terps are keenly aware of the challenge.

“We’re expecting blitzes to come from all types of places, and they’re gonna shift their fronts at times,” quarterback Taulia Tagovailoa said. “I just gotta know what to do … and know where my answers are.”

Whichever team snaps its schneid will have some semblance of momentum to carry into the final third of the year. But whichever doesn’t is stuck in free fall.

Maryland hopes to be the former. Saturday’s contest is one of only two games the Terps are likely favored to win throughout the rest of the season, and coming out victorious would go a long way toward making a bowl game and shaking off the narrative of the same old Maryland letting a major slide derail its dreams.

Otherwise, it’ll go over the edge.