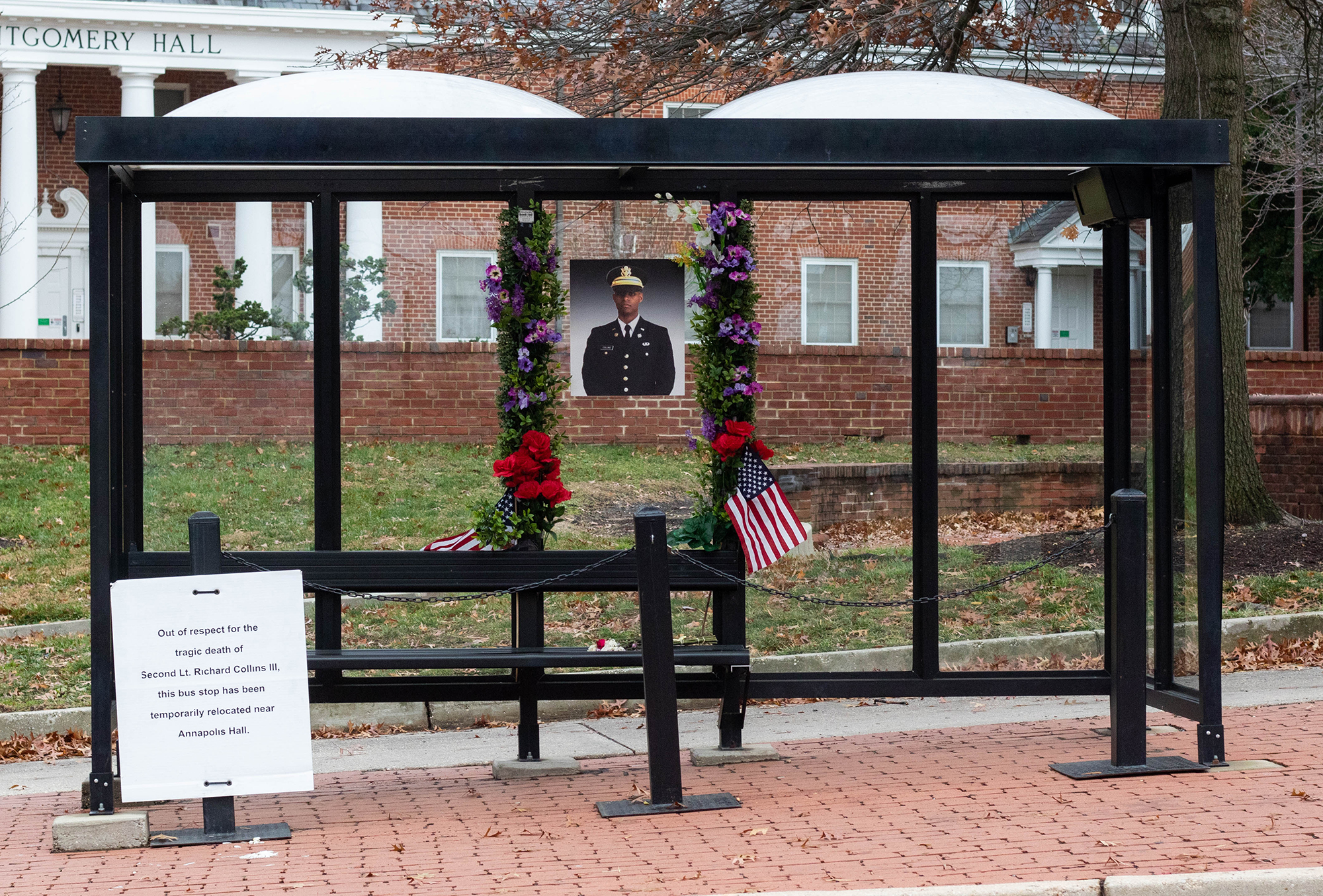 The bus stop in front of Montgomery Hall where police say Sean Urbanski fatally stabbed Richard Collins of Bowie State University in May 2017. Urbanski's murder and hate crimes trial is set to begin on Dec. 9 after being delayed four times. (Julia Nikhinson/The Diamondback)

In the wake of widespread violence against Asian Americans during the outbreak of the COVID-19 pandemic, having coherent measures to put a stop to hate crimes have become increasingly important. However, in the United States, decisions on how to implement laws against hate crimes are generally left up to the states, and the substantial variation in hate crime laws across the nation leads to inadequate protections for underrepresented groups.

Currently, five states don’t have hate crime laws. As for the states that do have laws against hate crimes, only two-thirds of them consider sexual orientation, gender and disability in their definitions, and only one-third include gender identity.

Laws also vary across the United States in key components of their phrasing and when it comes to the law, every bit of language is crucial in determining how justice will play out.

A law’s phrasing may seem deceivingly minute, but it can be an all-determining factor in whether a case ends in a conviction or an acquittal. A prime example of this occurred right here at the University of Maryland: In 2017, a Black Bowie State University student, 1st. Lt. Richard Collins III, was murdered at the university by an unprovoked Sean Urbanski, a former University of Maryland student. Though Collins was standing alongside a white man and an Asian woman, he was the only one attacked.

Urbanski liked a white supremacist Facebook page entitled, “Alt-Reich: Nation,” and had racist memes saved to his cell phone. This demonstrates clearly that Urbanski, at the very least, condoned, engaged in and was entertained by racist, antisemitic and sexist sentiments. And Urbanski’s choice to attack a Black man entirely unprovoked seems to indicate he had enough prejudice to warrant at least the charge of a hate crime.

Before the trial began, Urbanski was charged with both first-degree murder and a hate crime. However, after the defense rested its case-in-chief, Judge Lawrence Hill dismissed the hate crime charge, ruling that the state had not brought forth enough evidence to prove Urbanski murdered Collins because of his race. For Collins’ mother, Dawn Collins, hearing that was like her son being murdered again.

At the time of the trial, the Maryland law against hate crimes stated that no individual can be targeted “because of another person’s or group’s race, color, religious beliefs, sexual orientation, gender, disability, or national origin, or because another person or group is homeless.”

The words “because of” are important — many interpret this to mean that a crime must wholly be motivated by bias or prejudice, which is quite a difficult thing to prove beyond a reasonable doubt. When laws against hate crimes present these mountainous standards, not only does the injustice often go unrecognized in court, but prosecutors are reluctant to take the case at all.

In the Urbanski case, the judge admitted he did believe race was a factor in the murder, but because of the strict wording of the statute, he was unable to charge Urbanski with a hate crime. Had the wording of the law been different at the time of the trial, the outcome could have been entirely different.

After the trial, the Maryland General Assembly passed a bill in honor of Lt. Collins, which now declares crimes cannot be “motivated either in whole or substantial part” by factors of the individual’s identity, such as race. For Maryland, this is undoubtedly a step in the right direction, but for underrepresented groups living across the nation, more drastic steps are needed.

A universal standard for what constitutes a hate crime, for example, would be helpful to people in these states who are neglected as a result of these inadequate hate crime laws. As Maryland’s new statute specifies that prejudice doesn’t need to be the sole motivating factor, laws across the country should recognize that people are often attacked or targeted for more than one reason—no crime committed is simple or clear-cut — but if one of those reasons is prejudice or discriminatory beliefs, that should constitute a hate crime. For the U.S. to finally put a stop to the disproportionate cruelty experienced by underrepresented groups, we must combat hate-based violence in all its forms.