“Our son’s legacy”: Parents of Richard Collins take to Annapolis to back hate crime bills 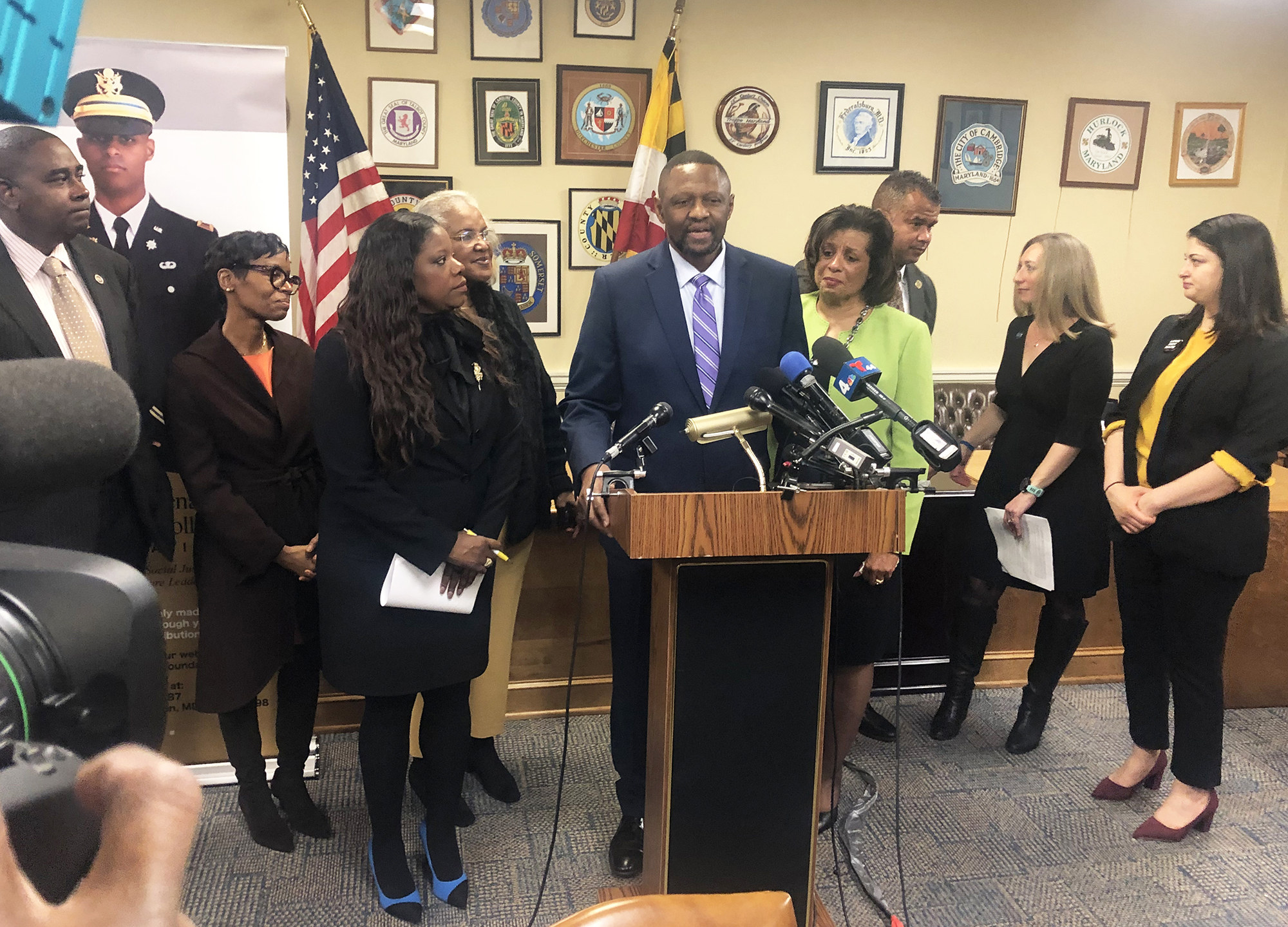 Prince George's County State's Attorney Aisha Braveboy and Dawn Collins stand by Richard Collins II as he speaks about SB606 and HB917 during a press conference in the Maryland House of Delegates on Feb. 11, 2020. (Lyna Bentahar/ For The Diamondback)

But Dawn Collins, Collins’ mother, stood out, wearing a bright, spring-green blazer. Soon after, she testified in support of a bill that would change Maryland’s hate crime statute, lowering the threshold for conviction.

“How can this not be a hate crime?” Dawn Collins said. “What has to happen?”

Collins’ son was stabbed to death in 2017 at the University of Maryland, late at night while waiting for an Uber with two others. In December, former University of Maryland student Sean Urbanski was found guilty of first-degree murder in the killing — but not of a hate crime, because the judge was not convinced there was sufficient evidence that Urbanski killed Collins because he was black.

“Hearing that was like my son was being murdered again,” Dawn Collins said in her testimony to the House Judiciary Committee Tuesday. “We couldn’t believe the bar had been set so high in the state of Maryland.”

The bills, named after Collins, would amend the language in Maryland’s current hate crime statute to include crimes that are partially hate-based. The current law leaves the extent to which hate must be a factor in order to convict someone open to the judge’s interpretation.

Braveboy, while satisfied that Urbanski could potentially serve a maximum life sentence without parole under his murder conviction, believed hate crimes would more easily go through the courts under the new definition, clearing up judges’ room for interpretation.

The current law, Braveboy said, could easily be construed to define a hate crime as wholly motivated by race or other targets of discrimination, which can be difficult for prosecutors to prove beyond a reasonable doubt.

Braveboy and the family, along with friends and community leaders, testified to both the Maryland Senate Judicial Proceedings Committee and the House Judiciary Committee Tuesday, urging both to change the law.

“It’s the thing that we owe to our son’s legacy,” said Richard Collins II, Collins’ father.

Since 2017, more than 7,000 hate crimes have been reported to the FBI nationwide each year. While Maryland saw a decrease in hate crimes in 2018, Collins’ murder took place during a three-year spike of bias-related incidents in the state, according to a 2018 Maryland state police report.

Rashawn Ray, a sociology professor at this university, called race-motivated hate crimes a national epidemic. The bill, he said, was a step forward.

“I don’t care if it’s 1 percent hate, 5 percent hate, 100 percent hate,” said Ray, a board member of the 2nd Lt. Richard W. Collins III Foundation. “Hate is something that we shouldn’t necessarily tolerate.”

While the companion bills — House Bill 917 and Senate Bill 606 — go through the state legislature, Congress is also considering a bill pushed by the foundation that would treat ROTC graduates who die before assignment as the law treats Armed Forces members who die in active duty, opening their families up to financial benefits.

Extended family and friends of Collins, as well as leaders from organizations such as the Southern Poverty Law Center and the Maryland Crime Victims’ Resource Center, also came to testify on behalf of the hate crime bill Tuesday.

Krystal Oriadha, co-founder of the county’s LGBTQ Dignity Project, spoke about her own experiences with hate as a black gay woman to the two committees, recalling being spat on and having rocks thrown at her.

After testimony ended, the family and their supporters filed out, seemingly in high spirits. Braveboy said while there’s no guarantee the bill will pass through the General Assembly, she’d seen a large amount of support from state senators and delegates. Collins’ father said he was “cautiously optimistic.”

“You can never tell just how any type of bill of bill or legislation will ultimately turn out,” he said. “We’re just moving on to the next thing.”

After the testimony, the day’s morning dreariness had cleared away and light streamed into the house lobby. After her family split up, Dawn Collins rested in a corner of the hallway. She’d made good on a promise to herself.

“Don’t let another mother feel the pain that I feel,” she said. “That I feel daily.”