Hearing that a jury wouldn’t get the chance to convict Sean Urbanski of a hate crime on Tuesday left Elonna Jones, the University of Maryland’s NAACP president, stunned and confused.

Three people were at the bus stop on the night police say Urbanski, unprovoked, fatally stabbed 2nd Lt. Richard Collins. The black Bowie State University student had been standing with a white man and an Asian woman, but Collins was the only one attacked.

And the man accused of killing him was a member of a white supremacist Facebook page. He had a series of racist memes saved to his phone.

On Monday, Judge Lawrence Hill stifled the attempts of Urbanski’s attorneys to get the hate crime charge dropped, saying that there was sufficient evidence for a guilty verdict. But on Tuesday, after the defense had rested its case, he reversed his ruling. The state failed to make the case that Urbanski killed Collins specifically because of his race, he said.

To many, the decision was a blow.

“It’s just another representation of ‘We don’t matter.’ And we’re lesser than, in the larger construct that is systematic racism,” Jones said.

“Today’s ruling is part of this country’s historical legacy of denying justice to victims of racist violence,” read a tweet posted by an account called “#Justice4RichardCollinsIII.”

Solomon Comissiong, the president of this university’s Black Faculty and Staff Association, called the ruling “very unsettling.” In his view, Urbanski’s membership in the Facebook page and the memes on his phone constituted “a strong likelihood that his intentions were motivated by hatred of people of color,” he added.

“I think there’s a strong correlation,” he said.

Hate crimes require “specific intent” — which is easier to prove in some cases than others, said Gary Bernstein, a criminal defense attorney based in Towson.

When violence broke out in Charlottesville, Virginia, during a rally in 2017, for example, marchers chanted “Jews will not replace us” and repeatedly used racist slurs. If Jewish people were then attacked, Bernstein said it’d be “fairly easy” to say that’s a hate crime.

“Some judges may not have tossed [the charge],” Bernstein said of Urbanski’s case. “The question becomes does the circumstantial evidence add up to enough, and the judge thought it was too speculative.”

When Kieaira Lucas got a news alert on her phone that the hate crime charge had been dropped, her whole mood immediately changed, she said.

“I just felt a cold chill through my body, I just felt goosebumps,” she said. “I was just like, ‘Oh my God, I cannot imagine how his parents feel, his loved ones feel, his friends feel.’”

Last week, Lucas quietly observed the courtroom’s proceedings with her boyfriend, both of them wearing bright gold T-shirts that called for “Justice 4 Richard.” She wasn’t able to make it to court on Tuesday, since she had a day-long meeting at the Lawyers’ Committee for Civil Rights under Law, where she works as a project assistant.

She’ll be in court again on Wednesday, she said, trying to offer the Collins family whatever comfort she can. At this point, she’s just holding out for the verdict, whatever it ends up being.

Ireland Lesley, president of this university’s Student Government Association, said she’d hoped a conviction on the hate crime charge could have granted some semblance of closure to the Collins family.

And while Lesley, who is white, didn’t want to speak for the university’s black community, she said it would be “incredibly reasonable” for students and faculty to be upset. She said before today, people could point to the incident as being a “purely racist act,” but the court turned that label on its head.

However, even in light of the ruling, the senior government and politics major said she hopes students work to make the campus a better place, especially for students of color. She also hopes that as the trial comes to a close, the university can take a “hard look” at the culture it creates.

“Just because the court has said one thing doesn’t mean the way students feel about [Collins’s death] has changed,” she said. “And I don’t think it will.” 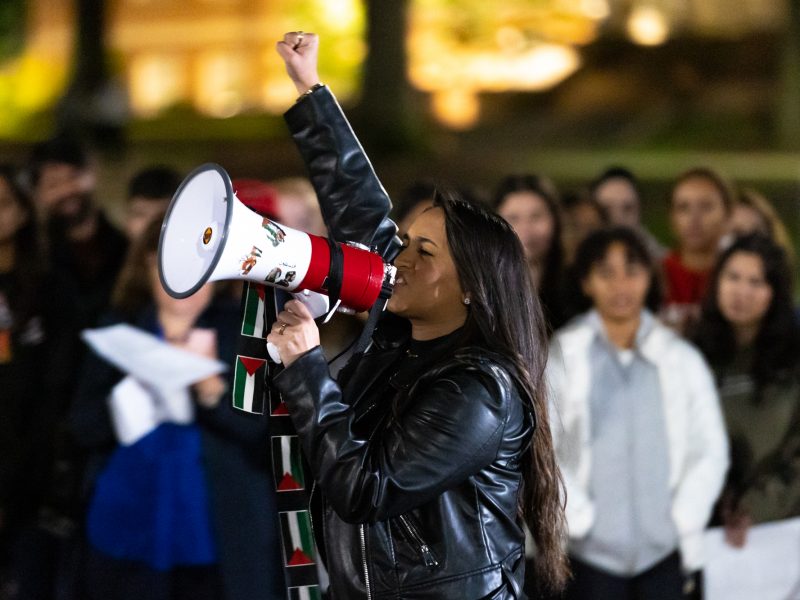