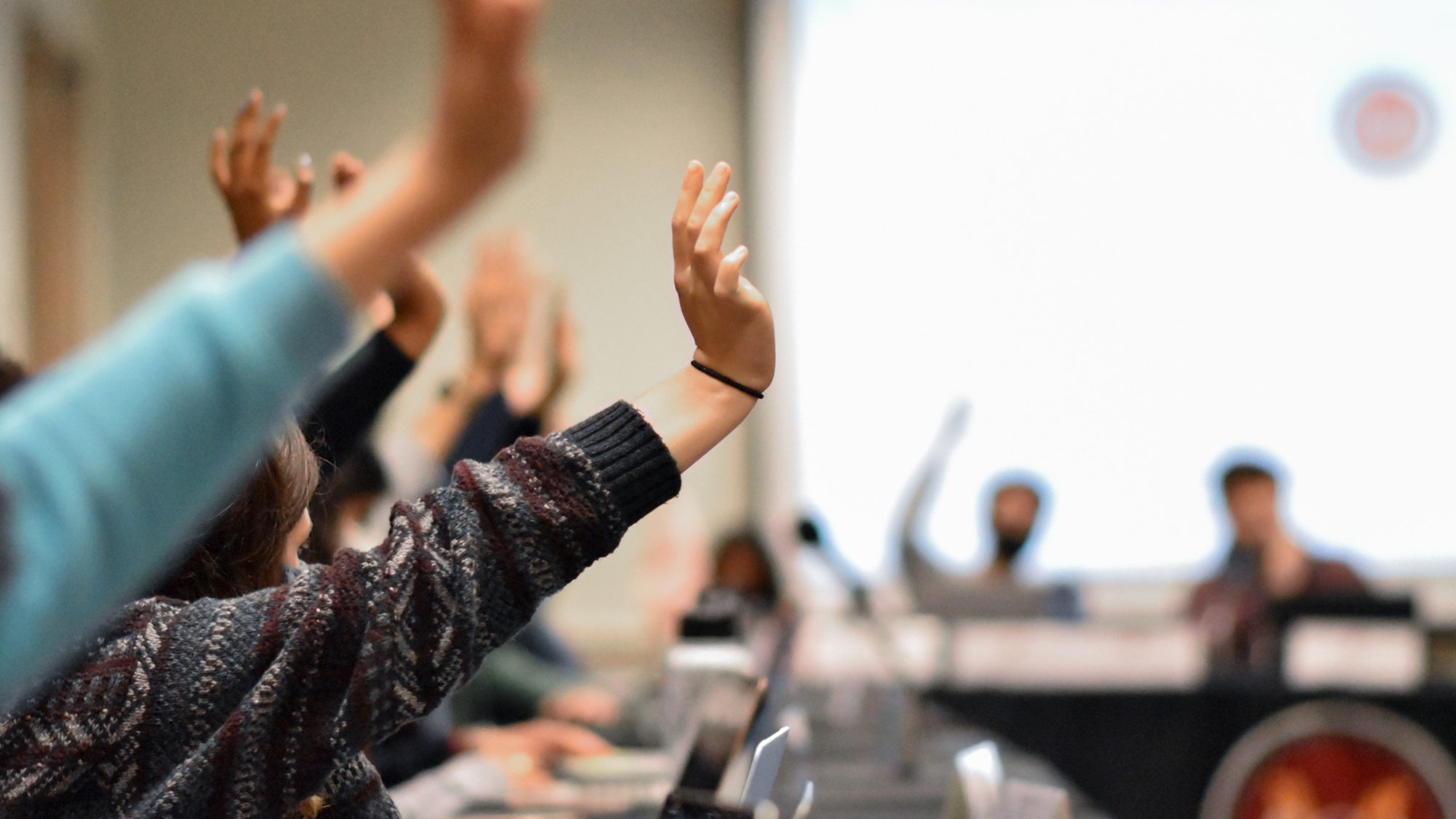 SGA representatives vote on a bill at a general body meeting on Oct. 27, 2021. (Autumn Hengen/The Diamondback)

In a last-minute addition to their Wednesday night agenda, the University of Maryland SGA introduced an emergency bill at their general business meeting condemning the actions and tactics of the anti-abortion advocates who demonstrated on Hornbake Plaza this week.

Created Equal, an anti-abortion advocacy group based out of Columbus, Ohio, hosted the demonstration Tuesday and Wednesday afternoon in the plaza. Students were confronted with graphic images. The group also handed out informational leaflets and debated with passing students.

The bill, if passed at next week’s meeting, would see the Student Government Association condemn the demonstrators’ tactics and ask the university administration to describe how enforcement of its policies could improve.

During the meeting, Nicholas Marks — the bill’s sponsor — expressed to the legislature that the bill is not a position against free speech on this campus, but only the methods used.

“I felt like the methods the anti-abortion protestors were using went against the established guidelines the group came into the university with,” Marks, an education representative and freshman government and politics and secondary education major, said. “I actually had a leaflet put into the basket of my bike.”

[UMD students fight back against anti-abortion demonstration at Hornbake Plaza]

According to an email sent by Stamp Student Union Director Marsha Guenzler-Stevens and obtained by The Diamondback, Stamp instructed Created Equal that they were not allowed to forcibly hand out their leaflets or debate with students without first being engaged.

But the crux of the group’s demonstration hinged on the display of graphic images.

The university’s “Guidelines on Demonstrations and Leafleting” states that “Persons shall not engage in harassing, physically abusive, threatening or intimidating conduct toward any person.”

“I was a little uncomfortable by the images that were being shown,” said Samantha Whitlock, the undergraduate studies representative. “They were very unnecessary and they were instilling fear into the students on campus and making them feel guilty and shameful. It was just honestly disgusting.”

The freshman enrolled in letters and sciences said she heard this sentiment from many students. This inspired her to co-sponsor the bill.

The images were the first thing South Campus Commons representative Jessica Levenson saw as she was walking to her next class. She decided not to stop and engage with the demonstrators but still felt disgusted by what she saw.

“Gore doesn’t get to me as much,” the senior psychology major said. “[The jumbotron] did because they were showing full detailed abortions on the screen. It was just very graphic.”

Levenson, one of the six co-sponsors of the bill, said she felt her privacy was violated because Created Equal was filming the demonstration.

In Maryland, it is legal to film an individual in a public space, such as the campus of a state university, without their consent.

“I hope that the bill puts in forth stricter regulations for groups who want to come and protest,” Levenson said. “Things like that should have much more trigger warnings.”

In the email from Marsha, she said there were signs at the top and bottom of Hornbake Plaza warning students of the images but that the wind kept knocking them over.

“The conversations were very educational and important for students to be engaging in,” Whitlock said. “But I don’t think that the harassment should be tolerated at all.”