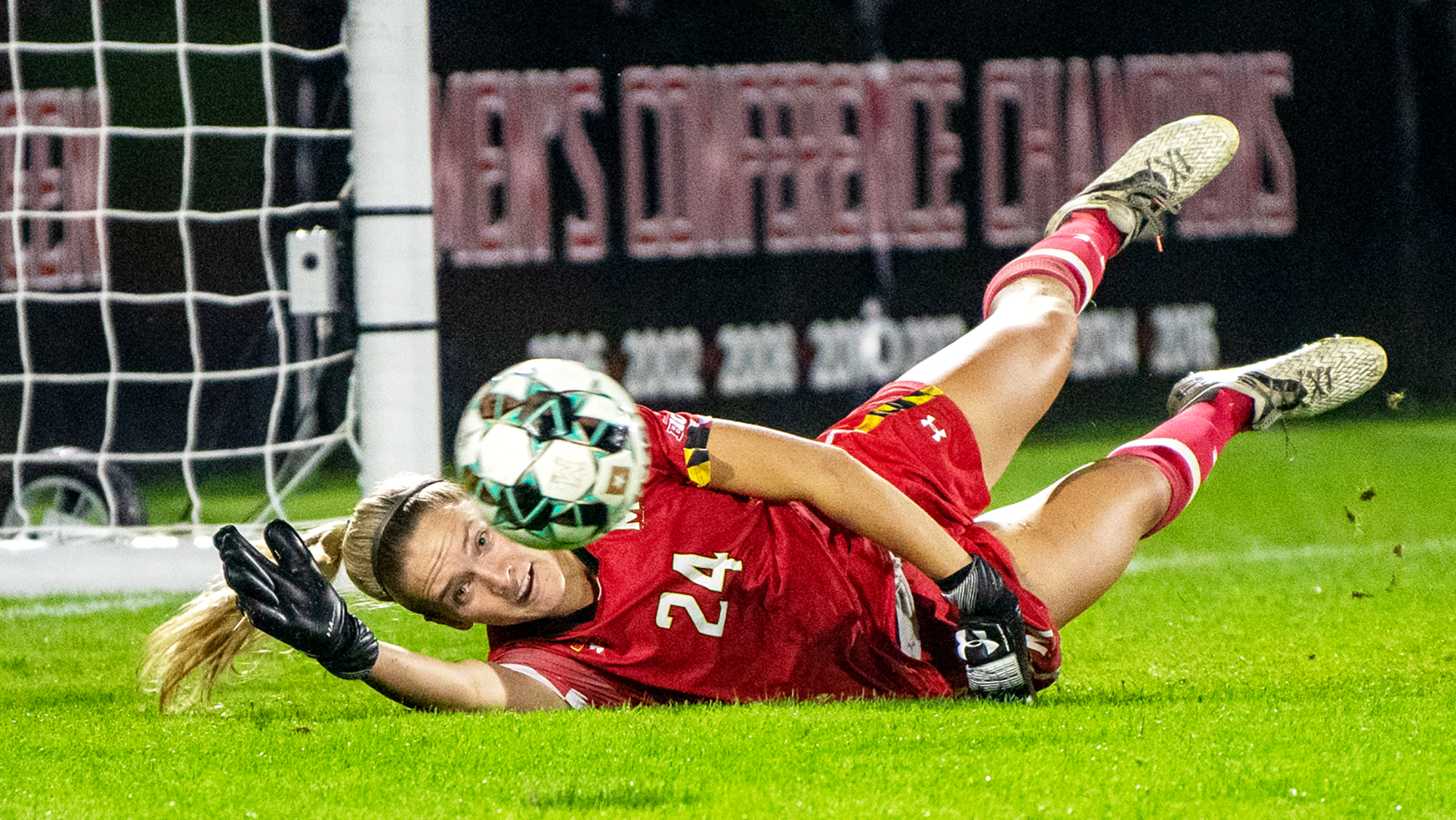 Goalkeeper Liz Brucia dives after the ball during Maryland women’s soccer’s 5-2 loss against No. 9 Rutgers on Oct. 14, 2021. (Joe Ryan/The Diamondback)

When their former teams needed them most last season, current Maryland goalkeepers Liz Brucia and Madeline Smith stepped up.

Smith didn’t play during regulation or either overtime period, but was subbed in for penalty kicks in Omaha women’s soccer’s Summit League semifinal against an undefeated South Dakota State.

In the shootout, Smith made a huge save before watching the deciding penalty fly over the crossbar, screaming in celebration as her teammates rushed to celebrate with her.

Brucia stepped in admirably for Georgia in the second round of the SEC Tournament against Auburn after the Bulldogs’ starting goalkeeper was ruled out.

Despite Georgia having 13 players unavailable due to COVID-19 complications or other injuries, the Bulldogs took Auburn to double overtime thanks in part to Brucia’s four saves, before succumbing to a 2-1 defeat.

With their seasons now over, both were looking for new challenges, and more importantly, playing time.

And they found it in Maryland.

It’s not uncommon for freshmen in high school to commit to a women’s soccer program, but Brucia’s road to college soccer was a little different.

The New Jersey native had played soccer her entire life, but also enjoyed other sports such as lacrosse and basketball.

While Brucia had played club soccer before her sophomore year, she would take a big step after her future club coach spotted her during a high school match and needed a goalkeeper.

“It was honestly crazy,” Brucia said. “That’s when I started focusing on training, I started doing things outside of soccer like lifting, strength and agility and things like that to try to just become far more serious about it and reach a new competitive level.”

Brucia decided she wanted to play college soccer at that time, but by the time she joined PDA, about half of her teammates were already committed.

The goalkeeper would also join the Olympic Development Program around then, and that’s where she would end up being spotted by her future Georgia coach.

Brucia attended other schools’ ID camps — where college programs scout potential players. And she received some other offers, mostly from smaller schools in the Northeast, but once she visited Georgia, her mind was made up.

“Once I actually went to visit Georgia, I realized I wanted the bigger school environment,” Brucia said. “I just love the atmosphere and campus there.”

She would spend all four years of her undergraduate career with the Bulldogs, making seven appearances in net while playing a backup role throughout her tenure.

After players were granted another year of eligibility due to COVID-19, Brucia, like many other players, had a big decision to make.

“I had a job offer for this year already,” Brucia said. “I was kind of faced with a decision of just hanging up the cleats and taking the job, or putting the job off and taking the risk to do this.”

While it was a difficult choice, she knew her soccer career wasn’t over.

“Deep down I knew that after the COVID year, and just kind of how my career ended in Georgia that I wanted to play another year,” Brucia said. “I didn’t feel fulfilled yet in my soccer career, so I wanted to take that chance.”

However, Brucia still had to find a perfect situation in order to be willing to give up her job.

Then, she found Maryland.

“I wanted to be closer to home, I wanted to have a strong business program and I was looking for a one year program,” Brucia said. “It also just kind of worked out perfectly in terms of just soccer wise… everything fell into place perfectly.”

From Omaha to College Park

Smith had also played soccer her entire life, and she always wanted to be a goalkeeper.

Unlike Brucia, Smith had played club from an early age, but was cut from her team when she was 13.

“It was just, like, such an eye opening experience,” Smith said. “You know I was 13 at the time. I never thought this would happen.”

She would join Gretna Soccer Club, and three years later triumphed over her old club in the Nebraska State Cup Final.

“Three years later we beat the team that cut me in state and it was just, it was such a magical moment,” she said.

Smith was a standout in high school, getting selected to an all-state team each of her four years, and committed to the University of Missouri – Kansas City.

But after graduating, Smith had second thoughts about her commitment.

“I’m not really feeling this,” Smith recalled. “I’m not feeling the university, and then I decommitted and I didn’t have anywhere to go.”

After frantically emailing coaches, she got an email back from the coach at Lake Tahoe Community College in California asking her to come for a visit — and Smith loved it.

“It was just a great atmosphere,” Smith said. “It was definitely a big eye opening experience to play at that level, get that experience.”

Smith excelled, notching an incredible 15 shutouts in 24 games as Lake Tahoe went undefeated until losing in the semifinals of the state championship.

“It was honestly the best experience I’ve had in my life,” Smith said. “Going to the final four, that was insane, we played some of the best girls in the country there.”

Smith would transfer to Omaha the following year in order to be closer to her family.

While she wasn’t able to nail down the starting spot, she did help her team advance to the Summit League Championship after saving two penalties in Omaha’s win over South Dakota State.

“I was glad to come and help my team out at that point in time,” Smith said. “I’m glad I took away that and had that as my last experience there.”

Last summer, Smith came out to Maryland to play for Coppermine United in the United Women’s Soccer League Two.

She impressed, and was named the Mid-Atlantic South Conference’s Defensive Player of the Year after keeping a remarkable six clean sheets in eight appearances.

While in Maryland, she visited College Park a few times before talking to coach Ray Leone and deciding to join the Terps.

“I was just super excited to stay out here and not have to move anywhere else,” Smith said. “And I loved all the girls out here too, so that was a big factor.”

After suffering injuries to multiple goalkeepers last year, Leone was looking to improve at the position coming into the fall 2021 season.

He couldn’t help but be excited when he saw Brucia and Smith were available.

“We saw them on the portal, we knew our previous starting goalkeepers were beat up so we knew we were in trouble,” Leone said. “We did everything we could to bolster that position.”

While transferring to a different school can be nerve-wracking, both goalkeepers mentioned how easy of a transition joining the team was.

“The team and the coaches were so welcoming,” Brucia said. “I was with the team 24/7, so it was really easy.”

Brucia started the season in goal for the Terps after Smith broke her hand just days after committing.

“I went to the doctors [and said], ‘Let’s get this surgery done,’” Smith laughed.

Smith’s surgeon told her she’d be back in six to eight weeks and would probably be unavailable until the end of September or early October. But she wouldn’t hear it.

Smith would make a speedy recovery, starting to train in full again at the end of August before making her debut for Maryland on Sept. 9 against Penn.

The effortless transition helped both goalkeepers gain chemistry with the team, which in turn aided on the field.

“When you have trust in each other and good relationships with each other off the field, it’s so much easier to work together on the field,” Brucia said.

Since Smith was cleared to play the keepers have split time, either playing half a game each or switching off playing full matches.

Both have impressed so far, combining for 70 saves this season, the third-most of any Big Ten team.

Leone has showered both with praise all season.

“Our goalkeeping has been outstanding,” Leone said. “They’re a good tandem, there’s no question about it.”

The goalkeepers have also been able to learn from one another, and Leone has loved watching them play and cheer each other on.

“I’ve really enjoyed watching their relationship develop. They really have pushed each other,” Leone said. “They’re sitting on the bus together and, and really rooting for one another. It’s so clear that they are completely behind each other.”

As the season comes to an end, Brucia stressed she couldn’t be happier with her decision to transfer to Maryland, despite not having the security of a job straight out of college.

“So, now I’m looking for a job again,” Brucia laughed. “But I’m very happy I did it. I have no regrets in that decision.”

And Smith, who will hope to nail down the starting job for next season, made it clear she chose well in joining the Terps.

“It’s definitely a fun experience to be here at this university and be at this level,” Smith said. “I’ve never been to a Big Ten school, a power five school, it’s definitely a big move coming from Omaha to here. I love it though.”