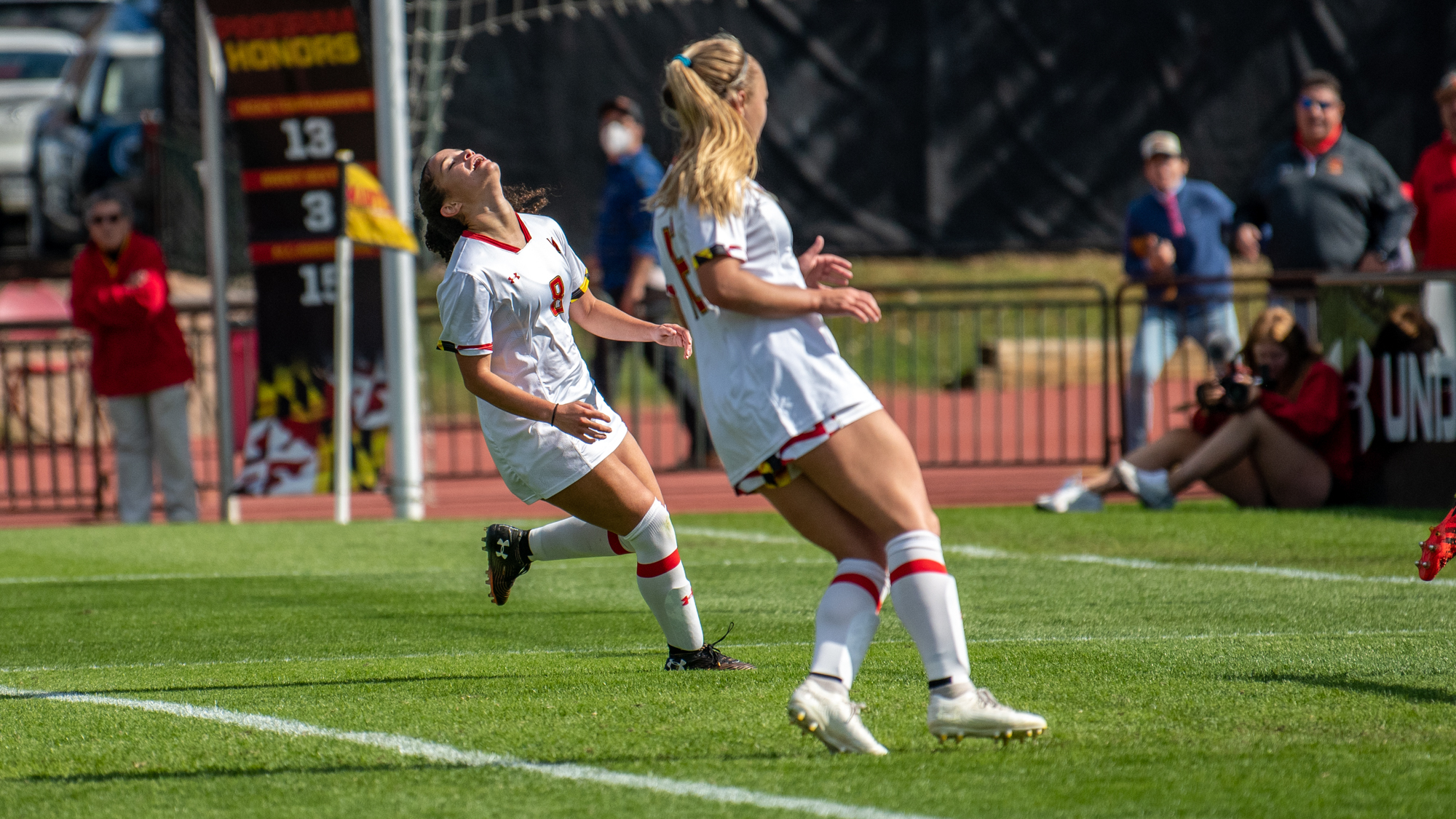 With seconds left in the first half, Maryland women’s soccer’s Loren Sefcik spotted goalkeeper Jamie Gerstenberg off her line and launched a shot from about 40 yards out that hit the crossbar.

In the second half, Indiana’s Oliwia Wos struck a curling free kick from about 25 yards out that rocketed off the post.

Those shots told the story of the game, with both sides unable to find the back of the net as the Terps fought the Hoosiers to a 0-0 draw.

“It was their best game of the year against an opponent of that level,” coach Ray Leone said. “We came out flying, and we did it the whole game. Though I think it was the moments where it was going against this for sure, we absorbed it and then responded.”

Indiana started the game on the front foot, but Maryland’s defense stepped up, blocking two of the Hoosiers’ first three shots in the match’s first 10 minutes.

The Terps’ best chance of the half came in the 29th minute, when Emily McNesby found Toni Domingos with a through ball. The forward struck it first time, but her shot went just past the near post.

After the Hoosiers’ bright start, Maryland grew into the match and looked the better side as the first half ended. Both sides registered two shots on target in the opening 45 minutes.

The Terps continued their momentum from into the second, earning three corners in the first 10 minutes of the frame.

Mikayla Dayes came close for Maryland in the 58th minute after stealing the ball off an Indiana player, but her shot went over the bar.

Wos nearly cashed in for the Hoosiers in the 64th minute, but her well-struck free kick from about 25 yards out hit the post and was cleared.

Just a minute later, Indiana had another stellar chance. The Terps failed to clear a long throw, and the ball fell to Jordyn Levy inside the goal box. But Levy’s shot was blocked by Adalee Broadbent.

Maryland did not register a shot on target after the first half, stymied by a Hoosiers defense that has conceded the fewest goals in the Big Ten.

“They’re solid, they just play really good, smart team defense,” Leone said. “They press well together, so that part was good but we solved it. We played some pretty good balls, we just didn’t get that perfect through ball.”

The Terps struggled to regain the success they found in the middle of the match, as Indiana outshot Maryland 15-10 through the first 90 minutes of play, and the game went to overtime.

The Hoosiers had a huge chance to score a golden goal and win the match in the 99th minute. Terps goalkeeper Madeline Smith collided with a defender and went down while Indiana sent a free kick into the box. Sarah Wampler brought the ball down with only a defender on the line to beat, but put her shot over the bar as Maryland caught a break.

Domingos was almost able to score the winner with 30 seconds left, but Indiana was able to clear the ball as the clock wound down and the game ended in a 0-0 draw.

The shutout was the Terps’ first in five matches. After conceding 10 goals in their last two matches, Olivia Hicks was happy with how the team defended.

“We did our job as a backline,” Hicks said. “We matched up, which is something that we’ve definitely been practicing and working on, and we covered for each other. We were just there all together just to prevent as many shots as possible.”

The draw ended Maryland’s four-game losing streak but extended the Terps’ 22-game winless run against Big Ten opponents. Although Maryland wasn’t able to find the winner, Leone said he was proud of his players, many of whom took the pitch for their last home game at Ludwig Field.

“You have no idea how hard it’s been for this group of women, and I can’t ask anymore,” he said.