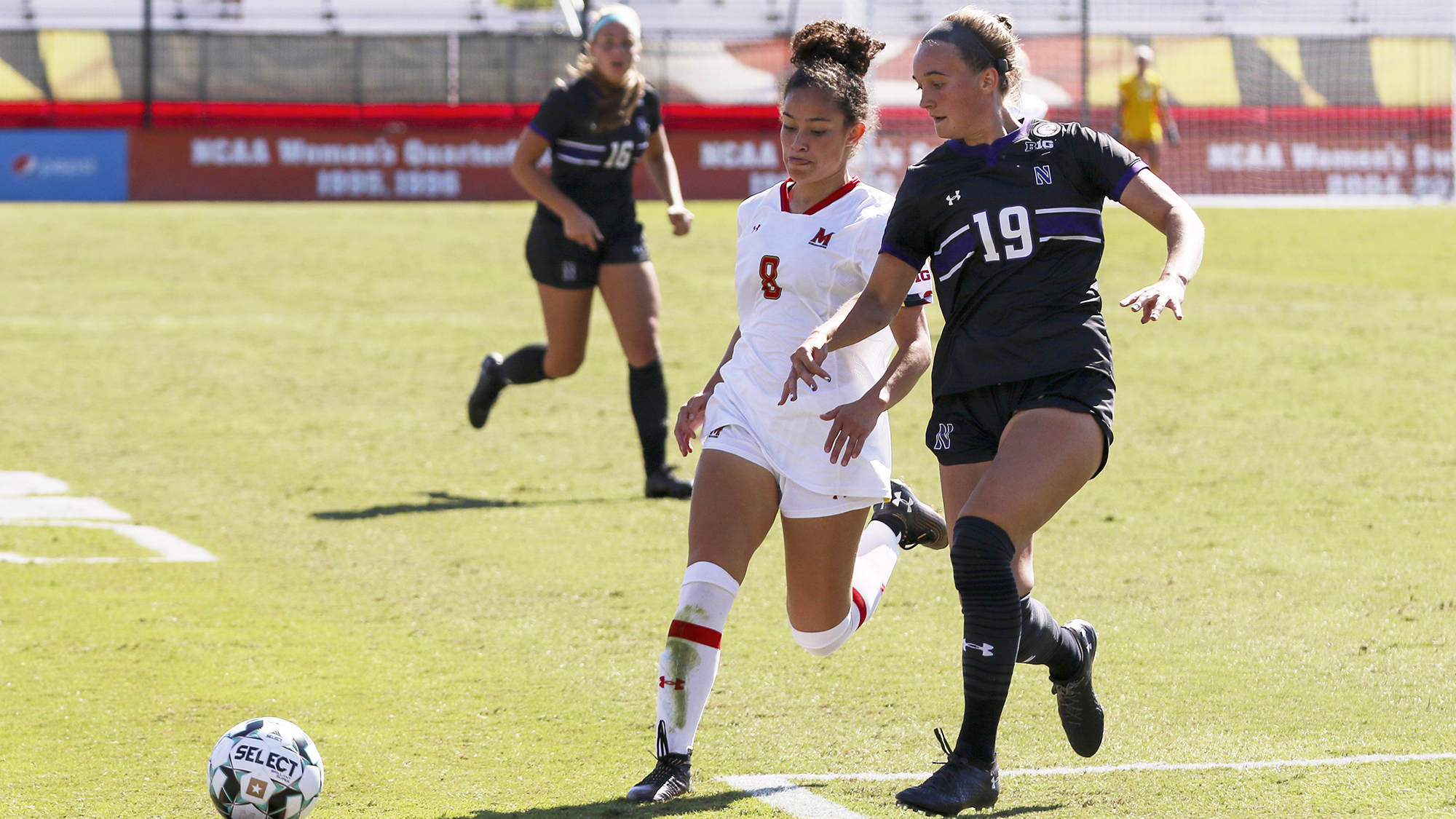 Toni Domingos races a Northwestern defender for a loose ball during Maryland women’s soccer’s 1-1 draw with the Wildcats on Sept. 26, 2021. (Cam Andrews/The Diamondback)

Maryland women’s soccer will have its hands full when it returns home to play No. 9 Rutgers on Thursday, and coach Ray Leone knows it.

The Scarlet Knights sit atop the Big Ten standings with a 6-0 conference record and have scored the most goals of any team in the conference this season.

“We’re gonna have to play our best, there’s no question about it,” Leone said. “We’re going to have to really, really bring our absolute best performance for us to be where we want to be.”

However, the Terps have played well against Rutgers in the past.

Despite going winless last season, the Terps played a then-No. 17 Scarlet Knights squad to a scoreless draw at home. And in 2019, Maryland traveled to Piscataway, New Jersey, and escaped as 2-1 winners thanks to goals from Hope Lewandoski and Alyssa Poarch.

The Terps hope to repeat their good form against Rutgers to snap their current nine-game winless streak.

Maryland’s defense will look to improve after conceding five goals against Penn State in its last match, but the team will be well-challenged by the Scarlet Knights’ talented forwards.

Frankie Tagliaferri scored a brace against the Terps last year as a Nittany Lion, but transferred to Rutgers over the summer and has scored 11 goals in 14 matches this season, tied for the most of any player in the Big Ten.

Maryland also has to worry about senior Amirah Ali, who was selected as the 22nd pick in the 2021 NWSL draft by the Portland Thorns earlier this year. Leone stated he has a lot of admiration for two of the best attackers in the conference.

“Well, [Ali] is one of the perennial players in the league for five years, so you got nothing but respect for her,” Leone said. “She’s such a consistent player, you’ve got to account for her at all times. And of course Frankie from Penn State is very good, too.”

Despite facing a very tough matchup, Leone believes his team will be up to the challenge.

“I think we’ll measure up to it because we know that every single player is such a good player,” Leone said. “We’re gonna have to really be at the top of our game for us to have an opportunity.”

The Terps will be thankful to return home after a disappointing run of away games, when they suffered three straight losses at Iowa, Illinois and Penn State.

But now Maryland has the chance to improve at Ludwig Field this week in its matches against the Scarlet Knights and Indiana. The Terps have played better at home throughout the season, holding a 3-2-3 record when playing on their home field as opposed to a 1-4-1 record  on the road.