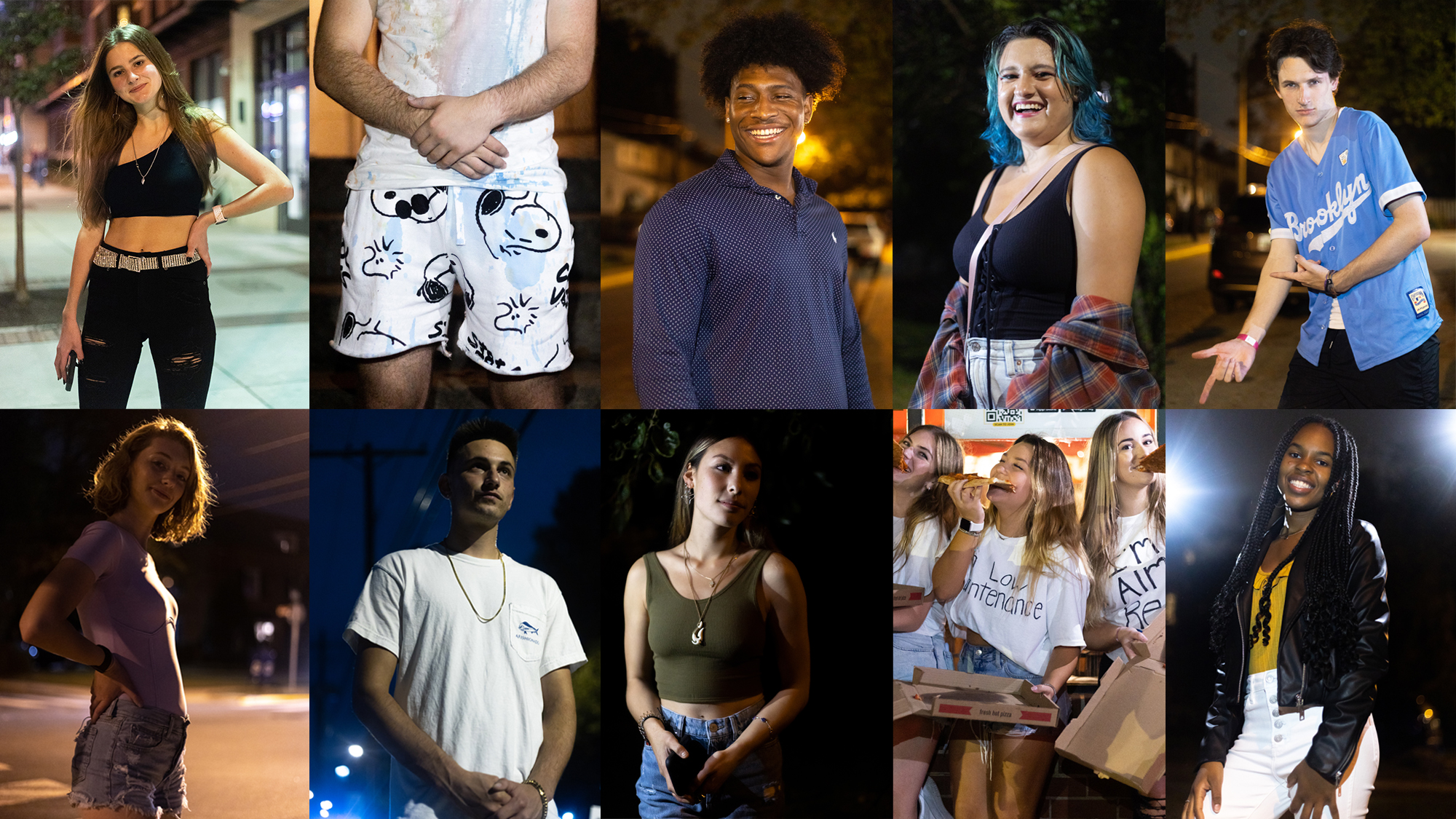 This story is part of a two part series discussing College Park nightlife. To read about nightlife, click here.

It was drizzling, breezy and chilly as the night came to life on Oct. 9 in College Park. University of Maryland students from all over campus were out and about amid the street lights.

Before leaving the house in pursuit of an eventful Saturday night, one of the first questions that usually comes to mind is: What do I wear?

As diversions writer Evan Hecht and photo editor Julia Nikhinson walked with me throughout the night, I talked to students about nightlife fashion and the meaning behind their clothing. Here are a few glimpses of people’s looks during just one night in Old Town.

Langston Belcher described his style as “bleakly bright” as he was wearing a black Versace Jeans Crewneck, jeans and denim polka dotted Converse that come from the Golf Wang line, a brand collaboration with Tyler, the Creator.

He said he started incorporating beanies in his look after working as a fisherman in Alaska over the summer.

“I got my ears cold and everything, I had my dreads and they were getting in the way [of my face]” Belcher said. “I just started wearing a beanie everywhere.”

Costwise, he said if something stands out, he feels like it’s worth the price.

Sophia Warfield went for a solid bloutfit for the night. She said she likes to change up her outfits every time she goes out.

“I still wanted it to be something different, so I put a sparkly belt on,” she said.

Warfield said she likes to thrift, as it gives a second life to clothes that have already been bought.

“You can find more unique pieces,” she said.

Kerri Shaw said she loves earthy colors, but the tone she wears depends on what she’s feeling.

“I feel at home today,” she said, wearing an olive green top and jeans.

She described her style as basic with a bit of flair — she loves to balance her style with accessories. Her silver, funky, dangly earrings come from the farmers market that comes to Tawes Plaza every Wednesday.

Her necklace was shipped from New Zealand. It’s an animal bone that was carved and made into jewelry, as in other countries, many creators use all parts of the animal.

“I think that’s more so honoring it than just throwing it out,” she said.

Shaw also added a little bling with her tooth gem, a Swarovski crystal attached to her tooth with dental glue.

Austin Mitchell said his style is “self-made.” He said his go-tos are his diamond studs and his vans. When he goes out, he said he likes to wear his gold chain.

When choosing his outfits, Mitchell said he likes to go with the flow.

“It’s not really anything particular, [it’s] whatever goes, whatever I like or feeling tonight,” he said.

Sierra Hall stayed warm amid the drizzly, fall night with a neutral long sleeve bodysuit. She said she intended to add a hint of edge with her black leather jacket.

Sometimes rules are meant to be broken — Hall said she doesn’t care about the old concept of not wearing white jeans after Labor Day.

“It always gives a pop of color, even when you’re not trying,” she said.

She described her style as chic but simple.

Kayleigh Taylor was on the way to a Western-themed social event. She said she accommodated her style to the theme with a bodysuit, a flannel and booties.

“I honestly prefer tight fitting clothes just as a sensory thing,” she said. “I prefer having things close to my body, but I like putting oversized things on top.”

She said her vibrant blue hairstyle has made people stare before.

Zach Hermann dressed up for a social event. The theme was “paint night.” People at the event wore white and got sprayed with washable paint if they wanted to.

Hermann said his style is “enjoyable,” when he showed off his Snoopy printed shorts that said “Cool Vibes” from TJ Maxx. He said he cut the jeans to fit the length he wanted.

“I like to take a fun spin on things, I think they’re cooler than just plain white shorts,” he said.

“I like to be dripped up,” Dike Nnawuchi said. “I want someone to walk in the room and be like, ‘Oh, who’s that guy?’”

Nnawuchi said he wanted to step it up on a Saturday night with shiny black Nike Air Force 1 shoes and jeans paired with a navy, athletic material Ralph Lauren polo his mother picked out for him.

As for accessories, he said one of his hoop earrings broke, so he made the most of it by having a hoop in one ear and a stud in the other.

So, back to the question: What should I wear? I have no particular answer.

This project isn’t meant to tell you what to wear, but rather show what an outfit and a bit of small talk can spark.