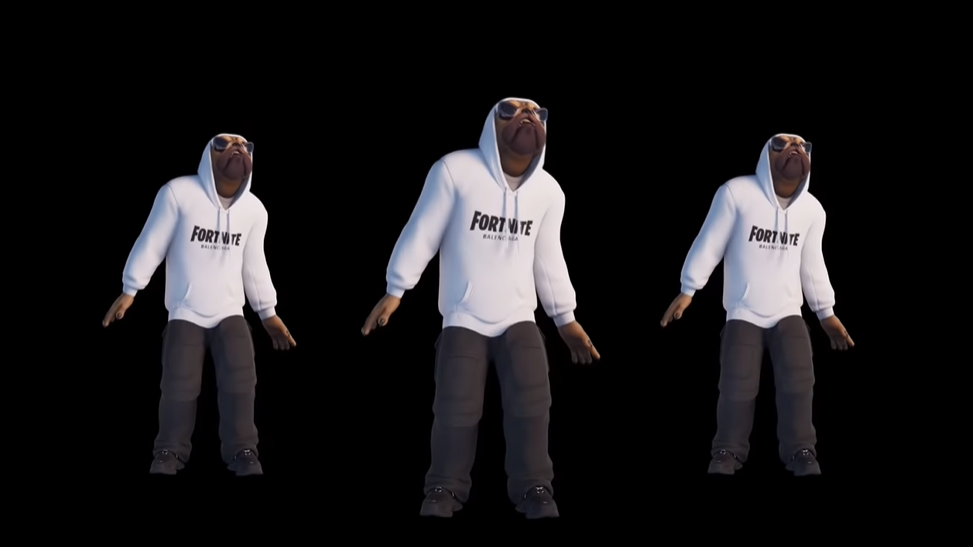 Fortnite and Balenciaga have done it again. Taking another step into the video game world — a foray it did last year with the video game Afterworld — Fortnite players around the world can now don their avatars in Balenciaga drip.

This collaboration is banal, if not lazy, in the sense that we are living in a timeline where weird brand collaborations are becoming the norm. See: Saweetie’s Hidden Valley Ranch Crocs — although this one makes more sense.

Epic Games, the developer behind Fortnite, worked with Balenciaga before using the company’s Unreal Engine on Afterworld, according to Vogue.

“From there, we have continued to be inspired by the creativity of Unreal and Fortnite communities,” said Demna Gvasalia, Balenciaga’s creative director, in a statement to Vogue. “It made total sense to me that we collaborate further by creating these authentic Balenciaga looks for Fortnite and a new physical Fortnite clothing series for our stores.”

The Vogue article also mentions that inside Fortnite, players can do a Balenciaga-specific dance inside the fashion house’s store, in addition to wearing the clothing.

But now, as the two mega brands have taken their collaboration off screen and into the real world, hypebeasts, gamers and fashion snobs alike can wear $495 T-shirts — some of which are already sold out — and $1,290 denim jackets.

The Fortnite designs reek of the hideous logomania seen in the Balenciaga and Gucci collaboration from earlier this year. But what can you expect from the same brand that parodied MasterCard and Crocs?

Maybe this Fortnite collaboration is more postmodern fashion fuel. I don’t know whether to be upset that humanity has reached this point or thoroughly impressed by Gvasalia for the pure lack of effort put into all of this, especially coming at a time where the brand is in hot water for cultural appropriation allegations.

However, Fortnite is not innocent in this either: This partnership is the most recent in a long line of attempts of being as relevant as it once was in years past. It is not a stretch to say the online video game peaked after its release in 2017 and plateaued in about 2019. While still a very popular pastime for many — some even making entire careers out of it — these collaborations and in-game events get the game in more headlines now.

Fortnite had the Rift Tour, featuring Ariana Grande, in early August of this year, where players could purchase the Ariana Grande skin, complete event-specific quests and watch a concert. The graphics were wholesome and colorful, matching Grande’s bright aesthetic. And to be honest, I kind of wish I was there. This event and the Travis Scott event (how could we forget about our favorite collab king) were the least egregious.

Fortnite’s biggest blunder of an event had to be its project with Time Magazine called March Through Time, focusing on Dr. Martin Luther King Jr.’s “I Have A Dream” speech, which after Justin Bieber’s Justice, can’t seem to catch a break.

[The history of Ted Lasso: How an ad character turned into an award-winning show]

“The experience extends with museum-inspired points of interest, and collaborative mini-game quests you complete with others,” an article from Epic Games said.

As players progress through they could learn more about the history behind the speech. If they completed the challenges in March Through Time, players could unlock a special spray.

Memes ensued and Fortnite took swift action to uphold the sanctity of this event. There is something so remarkably performative and post-Instagram activism and 2020 protests about Fortnite having to ban emotes because of players dancing and wearing various skins while holding “Dream” signs during the playing of “I Have A Dream.”

Even King’s daughter, Bernice King tweeted about the event, saying: “Decisions around licensing my father’s intellectual property are outside of my personal purview.”

Although the Balenciaga collaboration is obviously not the video game giant’s biggest offence, it is the most recent try in a long line of projects to make Fortnite what it once was to the world a few years ago. It’s obvious that Fortnite and Epic Games really want to make Fortnite happen again, but if there is one thing I can ask from both brands: Please, spare our eyes from more of these Hot Topic clearance designs and cringeworthy collaborations. The only good thing to come out of them are the memes.