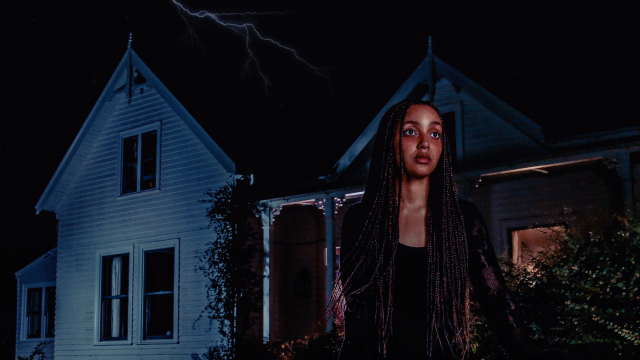 Social media sensation PinkPantheress dropped her debut mixtape to hell with it on Oct. 15.

Her music has dominated TikTok, and her name pops up on some of Twitter’s biggest music accounts. Having just started her career — she’s only 20 — it’s inspiring to see someone so young have success within her grasp. She has an exceptional understanding of our generation’s culture, especially our stereotypical lacking attention spans, which became clear on platforms such as TikTok. Her longest song on Spotify is two minutes and 33 seconds, with the majority of tracks in her discography under two minutes.

Her brevity is tantalizing. She attacks the listener with melody and rhythm, and then the song ends before you know what hit you. Exacerbating the breakneck speed of her sound is her consistent use of drum ‘n’ bass samples. Drum ‘n’ bass is a subgenre descending from U.K. jungle music, boasting characteristic, rapid breakbeats and complex drum patterns. Popular in the ’90s and early 2000s, PinkPantheress incorporates these classic sounds in a more modern way for a new audience. She even calls attention to these 2000s influences through the very low-quality, old-school style of her music video for “Just for me.”

The mixtape is only 10 songs long and has a sub-19-minute runtime. Half the songs are pre-released singles, while the other five tracks are brand new. It kicks off with her breakout hit “Pain,” an infectious tune with a classic drum machine beat and catchy vocals.

“Pain” is immediately followed by another single, “I must apologise,” a track that solidifies her style and matures her sound. Synthesizers push the momentum forward, breakbeats decorate the foreground and background depending on the section of the song and her idiosyncratic vocals take the spotlight. The melodies are simple but memorable, and the supporting vocal tracks she adds make the song.

For the rest of the mixtape, she uses her minuscule runtime to introduce herself to the world. Drum ‘n’ bass influences certainly shine the brightest, but she demonstrates capabilities beyond that. “All my friends know” presents PinkPantheress over a Latin beat, digging deeper into the alternative R&B genre. “Nineteen” is a slower track that’s more nuanced and emotional, and it’s understandably longer. It’s also instrumental, led by orchestral strings, which leads to an easy transition to the last track, “Break it off,” whose instrumental is dominated by an upright bass, another classical instrument like the strings in the previous song.

“Break it off” is my personal favorite from PinkPantheress. Its energy is palpable, and it switches from suspenseful verses to cathartic breaks, her airy vocals gently holding your hand through it all. She truly taps into the magic of drum ‘n’ bass on this single, reinventing the sample from Adam F’s 1995 “Circles” to make a truly timeless masterpiece more than 20 years later. She even subtly chops her vocals to emphasize dissonant jumps along the scale. It somehow has a classic feel despite the digital sounds. And, like all PinkPantheress songs, it’s dreadfully short, leaving the listener desperate for just one more chorus.

PinkPantheress is likely a product of the music industry’s relatively newfound home in streaming services. Her eclectic blend of genres that influence her music are easily explained through this avenue. Drum ‘n’ bass, R&B, Latin, electronic and even hints of hyperpop can be found in the heavily autotuned and cut vocals on “Just for me.”

[242 is bringing magic to their new release, ‘Hesitate’]

Streaming eliminates the boundaries of genre because now CDs aren’t organized as such in the local audio store. Everything is all together on one app — and PinkPantheress’ personal concoction is addicting. She turns the grimy U.K. underground into light and energetic fairytale wonder. I’ve described her creative instrumentals in depth, but her sound is complete with her ethereal and twinkling singing. A cherry on top.

to hell with it is a robust debut. It’s a potent introduction into what PinkPantheress can do, without giving too much away. Still, it’s rushed. I want to hear what PinkPantheress sounds like through a full song structure: verses, choruses, bridges and outros. This album is like a Zoom meeting with the camera off, but I’m ready for in-person class. Though she adds more mystery to her persona through these short runtimes, I can’t wait for her to give listeners the real opportunity to hear her ambition and versatility.

However, in its conciseness lies a message — this isn’t all, and there’s more coming. PinkPantheress is the artist to watch in the coming years as she grows more comfortable in this artistic space, further defining her already unique sound. With a little patience, we could watch her blossom now that her talent has taken root on to hell with it.