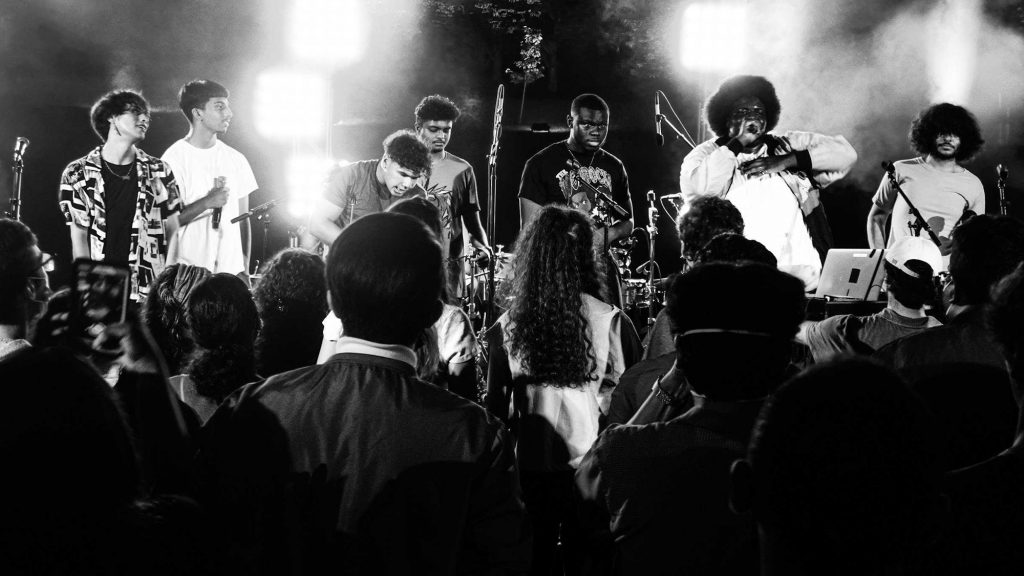 The band 242 plans to release songs every month following their performance at NextNOW Fest. (Photo courtesy of Abo-Keze Ewimbi)

David Avila, an artist for the band 242, said he was nervous before walking onto the stage on Sept. 17 at NextNOW Fest at the University of Maryland. It was the first time he had ever performed on stage with the band, and he wondered how he’d do having only rehearsed twice before the concert. Despite his concerns, the band performed confidently in front of an energetic crowd as the sun began to set.

“The energy of the live show was great,” said Sean-Michael Guikpa, 242’s rapper and a student pursuing a master’s degree in radio broadcasting at the University of Sunderland. “There was a crowd that didn’t really know us like that at all, and they were going crazy.”

The concert at the NextNOW Fest is only the beginning for what 242 hopes is a productive music career, Guikpa said. Fans of 242 can look forward to listening to a new single monthly following the Friday release of “Hesitate.”

The idea for the band first emerged when Abo-Keze Ewimbi, a junior at this university known as “Kang” onstage, was in eighth grade at Roberto Clemente Middle School.

[Review: ‘Baker’s Dozen’ puts dessert in the spotlight, not the contestants]

After participating in a program that taught rock music at the school, he decided he wanted to continue playing music in high school and chose 242 as the name of his band because it was the room number that the rock program took place in. Since then, the band has grown to have a total of nine members.

In high school, 242’s sound transitioned from rock to its current identity. The main genres of music that 242 creates are hip hop and pop, according to Guikpa. Yet, it varies due to the amount of voices — many of whom have their own solo projects — collaborating together.

Diego Castellanos, known as “Uncle Hugo” by the rest of the band, said he believes this diversity makes 242’s music unique since the band members are able to blend so many different influences.

“We all have our own personality, our own style, our own colors,” Castellanos said. “Bringing all that together, that’s just magic.”

This collaborative “magic” has led to the upcoming release of “Hesitate,” which Cole Price, a Montgomery College freshman and self-proclaimed hype man of 242, described in only two words.

What Ewimbi likes about the new song is that it deals with the mental health issues many members of underrepresented communities face when they don’t have the support of their families or communities, he said. The song has an upbeat and energetic sound to it because Ewimbi wants the audience to be pulled into the song and pick up on the lyrics’ themes of mental health struggles.

The most interesting aspect of the new song is its mix of hip hop and pop, Price said. It incorporates both the melodic singing of pop with the drums and instrumentals of trap. This trap-pop sound and the way they use upbeat music to counterbalance serious themes are what Price said makes the song work.

[Review: ‘Lamb’ is a slow burn, but it never truly ignites]

Members of 242 said they are interested in performing live again after the success of NextNOW Fest.

“Everybody go crazy, the atmosphere will be great,” Price said. “It’s going to be awesome.”

Guikpa said he looks forward to building an audience through live performances and Ewimbi expressed excitement for the feeling he gets onstage.

“Feeling all that adrenaline, feeling the creative energy, is most pure when you’re on stage in front of screaming people,” Ewimbi said.

When it comes to the connection between all the band members, who are not all living in Maryland at the moment due to college, their relationship is more than just being in a band together, according to band member Stefan Siewe.