Review: ‘Lamb’ is a slow burn, but it never truly ignites 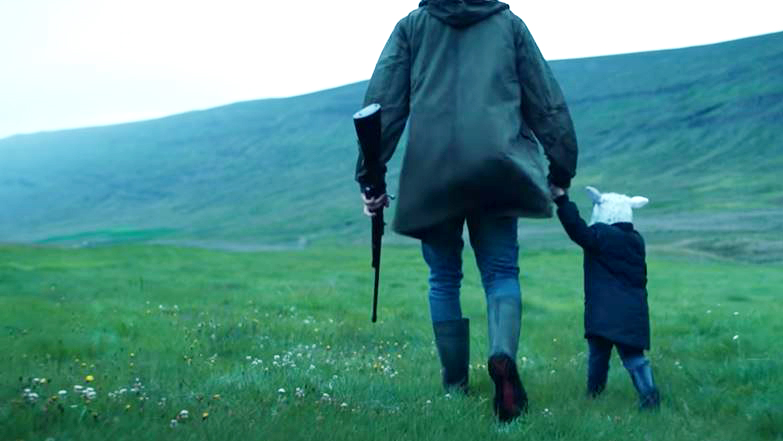 Lamb follows an Icelandic couple on their quiet farm as they find joy raising a sheep-human hybrid, which doesn’t sound dreadfully boring, but the pacing kills it.

Slowly and methodically, the A24 film ingratiates audiences into the world of a picturesque Icelandic farm — but the patient pace of exposition never picks up, which makes horror movie tension hard to achieve.

As the film begins, the audience is blessed with long shots that bookend the action of each scene. We can live in the film’s world for a few moments before a character enters the frame and after they’ve done their part. This style brilliantly encourages the audience to enter the world and feel what the characters feel, while letting us enjoy the unbroken Icelandic landscape.

Ingvar, played by Hilmir Snær Guðnason, and María, played by Noomi Rapace, portray their characters’ loving and loss-ridden marriage wonderfully. Their near-wordless existence before the child’s birth is brightened by her. Their joy is palpable as they live as a happy little family. Of course, the bizarre situation made it hard to sympathize while I was trying to determine whether they were suffering a shared delusion.

So now they have something to lose, and Lamb is listed as a horror movie, so one would expect it to be ripped away. But instead, the joy is coaxed out of them with the same meandering pace of the introduction. The film even makes a gunshot feel like it takes minutes to make an impact, which is impressive on some level.

The story is interesting enough and the characters have depth to explore, but the movie moves too slowly for any of it to really matter. If the pace feels overly attentive, it also feels intentional. There is no question in my mind that every second of footage was measured for its worth and found dripping with emotional gravitas. But that seems to be the only tool on Lamb’s belt — when every shot saunters past its expected cutaway, it’s no longer an intriguing window into a mysterious world, but rather a lethargic diversion from plot progression.

A few minutes in, Lamb had convinced me it was a slow-burn horror flick. But the film never ignited, and I found myself checking my watch an hour into the one-hour and 46-minute runtime.

After sitting through most of the film, we are rewarded with anticlimactic murder followed by an absurdly long shot of a distraught María. And then we get credits. There is no real explanation of the sheep-person phenomenon, so that can either be perceived as a cleverly open-ended mystery to leave the audience wondering or a sign that an explanation would be too exciting to fit the tone of the film. I’m leaning toward the latter.

This is the kind of film that will win awards to bout, but won’t wow audiences nearly as much as it will uppity critics.