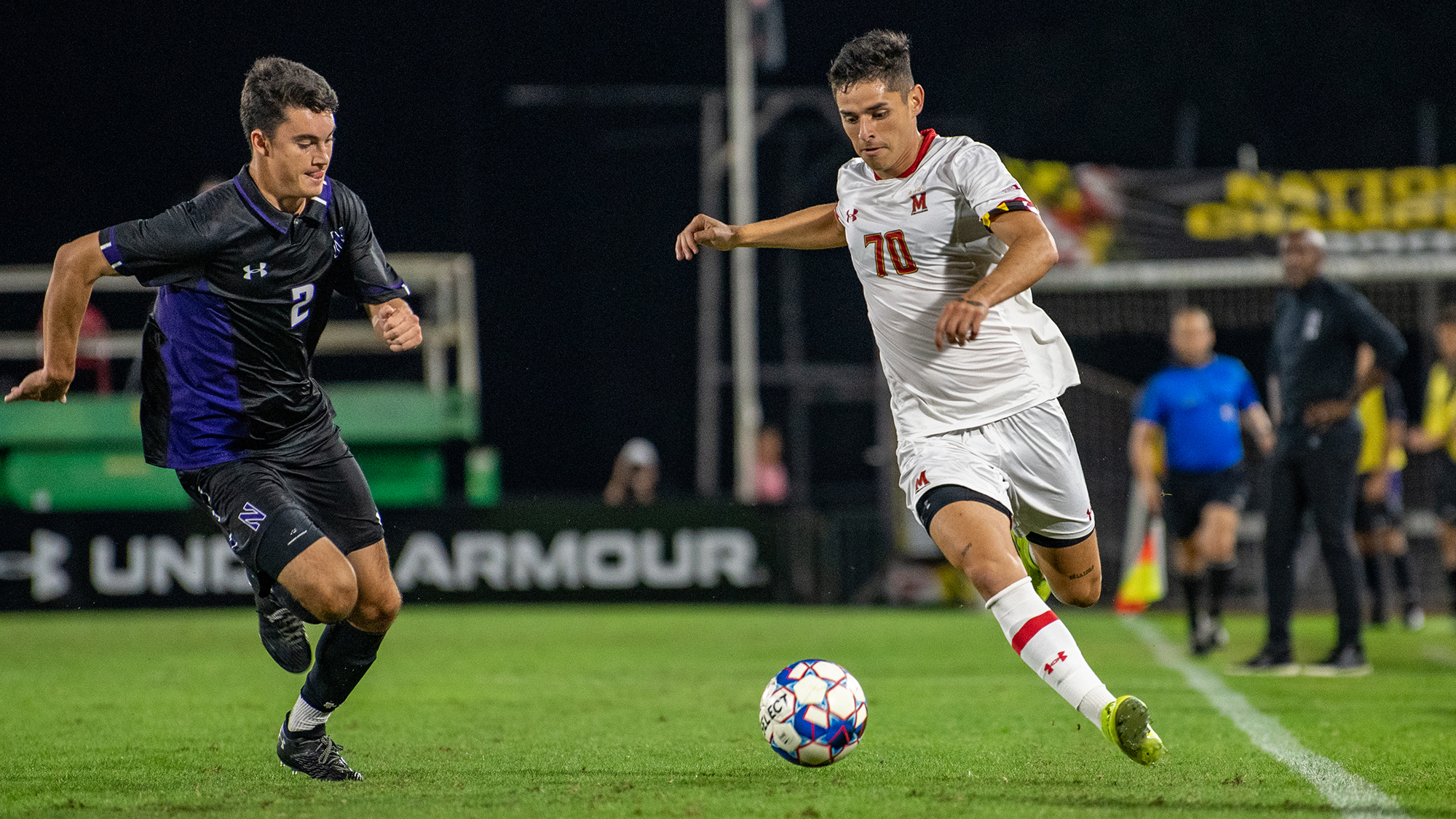 Brayan Padilla takes a touch up the sideline during Maryland men’s soccer’s 3-1 win over Northwestern on Oct. 8, 2021. (Joe Ryan/The Diamondback)

Maryland men’s soccer misfired again and again on shot attempts through 97 minutes of play, eventually facing down the ramifications if they came up shockingly short against a non-conference opponent with a single win.

That reality rang true until Ben Bender threw his foot with the authority of someone who longed to call game on Delaware and netted within the 98th minute. The team erupted, and the Terps escaped with the win.

Springing off that matchup with the Blue Hens, which required that overtime stunner for Maryland to come out on top, the Terps clash with their final non-conference opponent of the season — Pacific.

“[Pacific’s] been a very good team that plays a very good brand of soccer,” coach Sasho Cirovski said. “It made sense to fill that date with a team that I think is gonna to contend be an NCAA tournament team.”

Pacific, a member of the West Coast Conference, will have to travel over 2,700 miles to face Maryland at Ludwig Field. It will be the Tigers’ longest road trip in school history.

While the matchup remains key to the Terps’ momentum going into an increasingly important Big Ten slate to end the season, the question remains as to when Maryland will finally string it all together.

Cirovski’s club has had dominant defensive wins, chance-engorged victories and close match edges like the one over Delaware. So far, though, the Terps haven’t really been able to carry their best qualities combined into a single match to showcase the dominance they’ll likely need to advance far in the NCAA tournament.

“In the past we were worrying about playing good soccer and not really too much of results,” defender Brett St. Martin said. “Now, it’s more towards just winning at all costs.”

[‘That was more like Maryland’: Men’s soccer returns to strong form against Northwestern]

Maryland’s largest issue remains its finishing abilities, a problem not suppressed in the win over the Blue Hens. The Terps totaled 17 shots but only managed their lone game-winning goal. It remains something they’ll look to work on further against Pacific.

“I think that [finishing] was one of the points for sure,” forward Brayan Padilla said. “We had a lot of opportunities where we couldn’t put it in the back of the net, so the focus today was on the attacking side and just finishing things off.”

Maryland’s final non-conference game of the season offers a gilded chance to evolve while the games don’t matter as much. In a few short days, they’ll be more crucial than ever.

To be prepared for the arduous road to come, the Terps get one last tune-up. They’ll look to make it count.