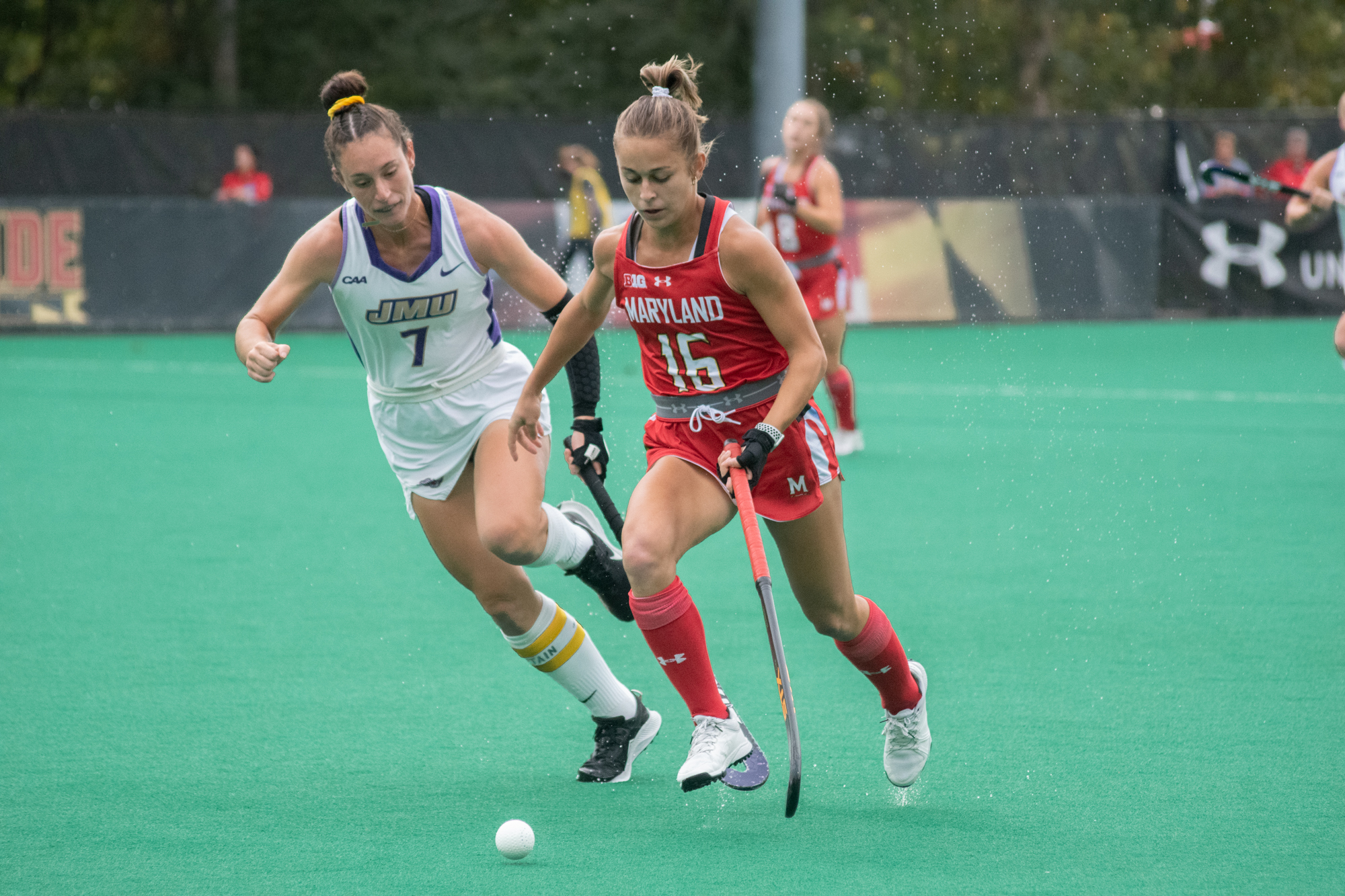 Three days after hitting the golden goal to send No. 8 Maryland field hockey out of Charlottesville, Virginia, victorious, Hope Rose was moving toward the post in the second quarter of the Terps’ match against James Madison on Sunday afternoon.

The freshman was the beneficiary of a pass from Margot Lawn, and flipped the ball into the back of the cage.

While it was the first of three goals Maryland scored, it was the only one they needed. The Terps pulled off a 3-0 pasting of the Dukes, as they took 24 shots against their opponent’s three.

“When you take 24 shots, you’d like to come up with a little more than three [goals],” coach Missy Meharg said.

Maryland (9-4) was without one of its best offensive players, as Julianna Tornetta is day-to-day with an injury.

Still, the Terps controlled the tempo of the match for much of the opening quarter, taking nine shots and drawing five corners before James Madison (7-5) could even get a shot off.

And early in the second quarter, on its 10th look, Maryland cashed in.

Lawn dashed toward the endline and smacked a backhanded pass toward the cage. Rose stood right by the post, stepped forward and pushed the shot home.

The score was the seventh of the season for the freshman standout — matching Bibi Donraadt for the team lead. And the Terps took a 1-0 advantage.

It wasn’t until late in the second quarter that the Dukes took their first shot. Maryland’s defense continued to be strong in the midfield, and the offense was getting shots off. But James Madison goalkeeper Florien Marcussen was not letting much by her.

“I have a lot of confidence in my defense,” goalkeeper Noelle Frost said. “They have great instincts … I’m really just proud of them.”

The Terps headed to the locker room at halftime with a 1-0 lead, despite absolutely dominating the shot battle. And Maryland came out firing in the second half.

Not even three minutes in, Emma DeBerdine drove downfield and passed it to Taylor Mason, who buried her third goal of the season.

[No. 8 Maryland field hockey hopes to bounce back against No. 12 Virginia]

And less than three minutes later, the Terps continued. After Rose matched Donraadt for the team lead in goals earlier, she sent a pass to the senior forward — who scored her eighth goal of the season to recapture the top spot.

Maryland had a 3-0 lead over the Dukes, who still weren’t getting chances to score.

“We did a really good job of attacking together, getting all our midfielders and attackers up the field together with a lot of speed,” DeBerdine said.

Late in the third quarter, the Terps looked like they were about to add to their lead. Donraadt dribbled the ball downfield, flying through James Madison’s midfield. She sent it forward to Mayv Clune, who had no one in front of her but Marcussen in her cage.

Clune got it past Marcussen, but the Dukes’ Rachel Yaeger came sprinting in to make a fine defensive save.

Marcussen was replaced by Brandelyn Heinbaugh to start the fourth quarter, one of several substitutions as both sides emptied their benches with the game out of reach.

And when the final horn sounded, Maryland was victorious at home for the first time since Sept. 21.