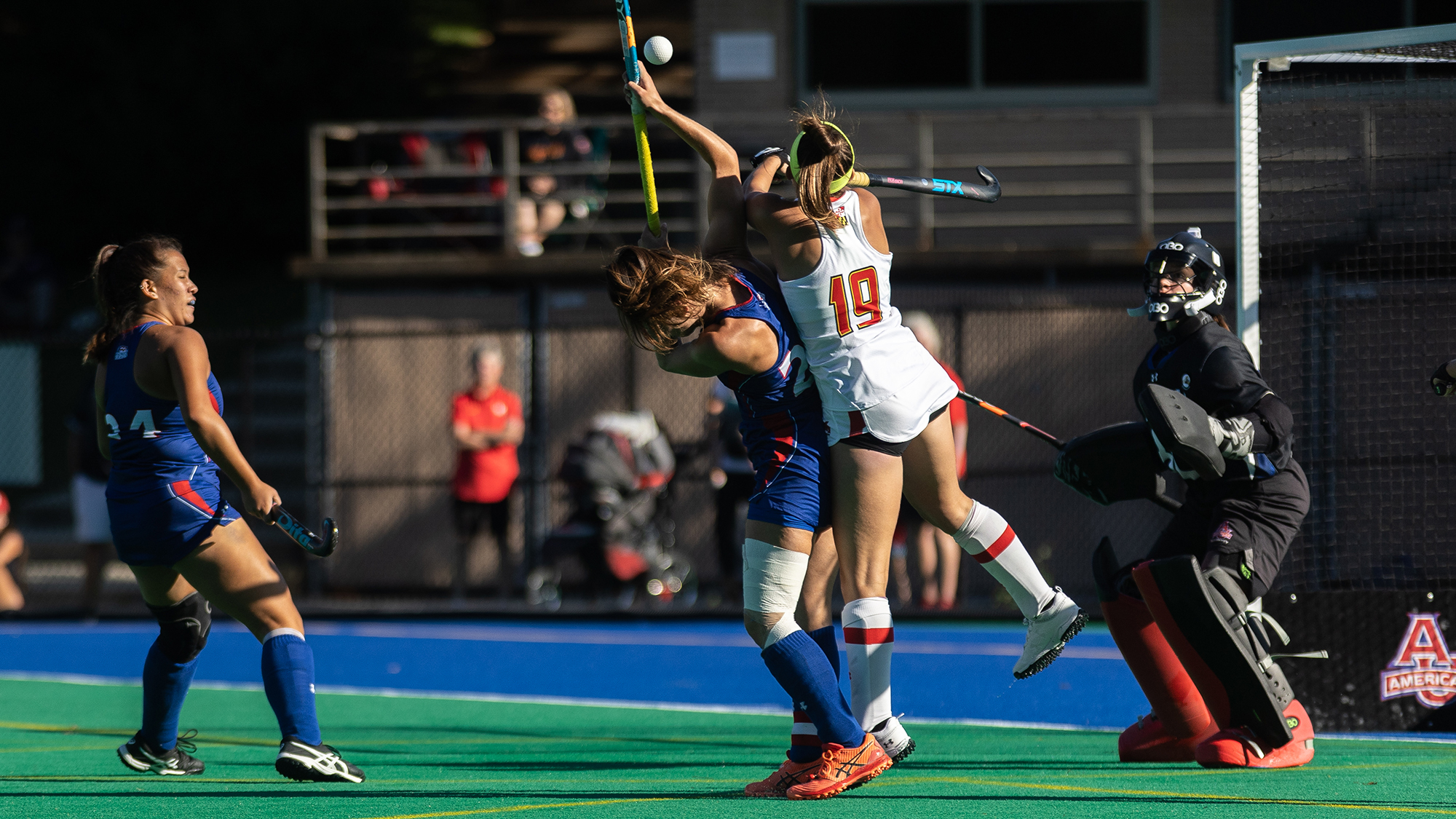 With time running out in the first overtime period, No. 8 Maryland field hockey led a fast break charge downfield.

Hope Rose has been all over the Terps’ offense this year. And the freshman played hero on Thursday, rifling in the golden goal.

Rose fell to the turf as Maryland’s celebration began in Virginia. The Terps had taken down the No. 12 Cavaliers, 2-1, after a nearly 70-minute battle.

“I was definitely gassed by the end of that overtime quarter,” Rose said. “But I think everyone had enough gas left in the tank to push through and get the winning goal.”

Both high-powered offenses started attacking early. Virginia (7-4, 2-1 ACC) came out strong, getting off four shots off in the first seven minutes.

But Maryland (8-4, 1-3 Big Ten) was ready. Maura Verleg continued her impressive play on the defensive side of the midfield, and goalkeeper Noelle Frost had her back if the ball got past.

The Terps drew a corner in the first, but Riley Donnelly’s shot missed.

The stalemate got a little more intense when the clock flipped to the second quarter. Bibi Donraadt was flagged for a green card, before the Cavaliers’ Peyton Tollaksen earned one, too.

[No. 8 Maryland field hockey hopes to bounce back against No. 12 Virginia]

During the final two minutes of the quarter, Virginia began to heat up. The Cavaliers drew three straight penalty corners.

But just like when No. 1 Iowa drew two in a row before earning four straight chances against Maryland on Sunday, the Terps’ corner defense continued to be strong. They handled each of those attempts, and the teams headed to the intermission scoreless.

The same could be said for the third quarter. After being outshot, 11-3, in the first half, Maryland drew a trio of corners to even the stats out a little. But all three were stopped by Virginia.

“You can feel it — when we run at top speed with the ball, and off the ball, we’re so dangerous,” coach Missy Meharg said. “And when we did that, starting in the third quarter, we dominated.”

Early in the fourth, the Terps continued to make strides toward the cage. They drew another corner, their fifth of the day, but the shot was unsuccessful.

What the match made up for with its lack of offense was its showcase of strong defenses and competitiveness. While goals weren’t being scored, both sides showed a great deal of grit and played a good brand of hockey.

And on Virginia’s sixth penalty corner of the day, it capitalized. Cato Geusgens took the shot, which surged toward the cage. Laura Janssen was right there to deflect the ball into the cage — and push the Cavaliers ahead, 1-0.

“We have got to keep the pedal on the ground,” Meharg said. “We are too good not to.”

Just like Sunday, it looked like one team had finally pulled away. With such a low-scoring sport, one goal is often all a team needs, especially so late in the match. But not for Maryland.

After being down early in the penalty corner battle, the Terps matched Virginia with their sixth on the day.

The ball was rebounded a number of times and eventually found its way by Kyler Greenwalt’s stick. The vice captain rifled a backhanded shot — and nailed it.

For the second straight game, Maryland tied it up in the fourth quarter. After 11 second-half shots against Virginia’s five, the Terps and Cavaliers headed to overtime.

Maryland drew a corner about midway through overtime. But as Emma DeBerdine began her insert, whistles blew and Virginia was flagged with a false start — giving Maryland a one-man advantage. Still, Donnelly’s shot was saved.

And with under a minute remaining in the sudden death period, Rose found twine, sending her team spilling onto the field in celebration.

“We never really gave up,” Greenwalt said. “We really just stayed in the game.”