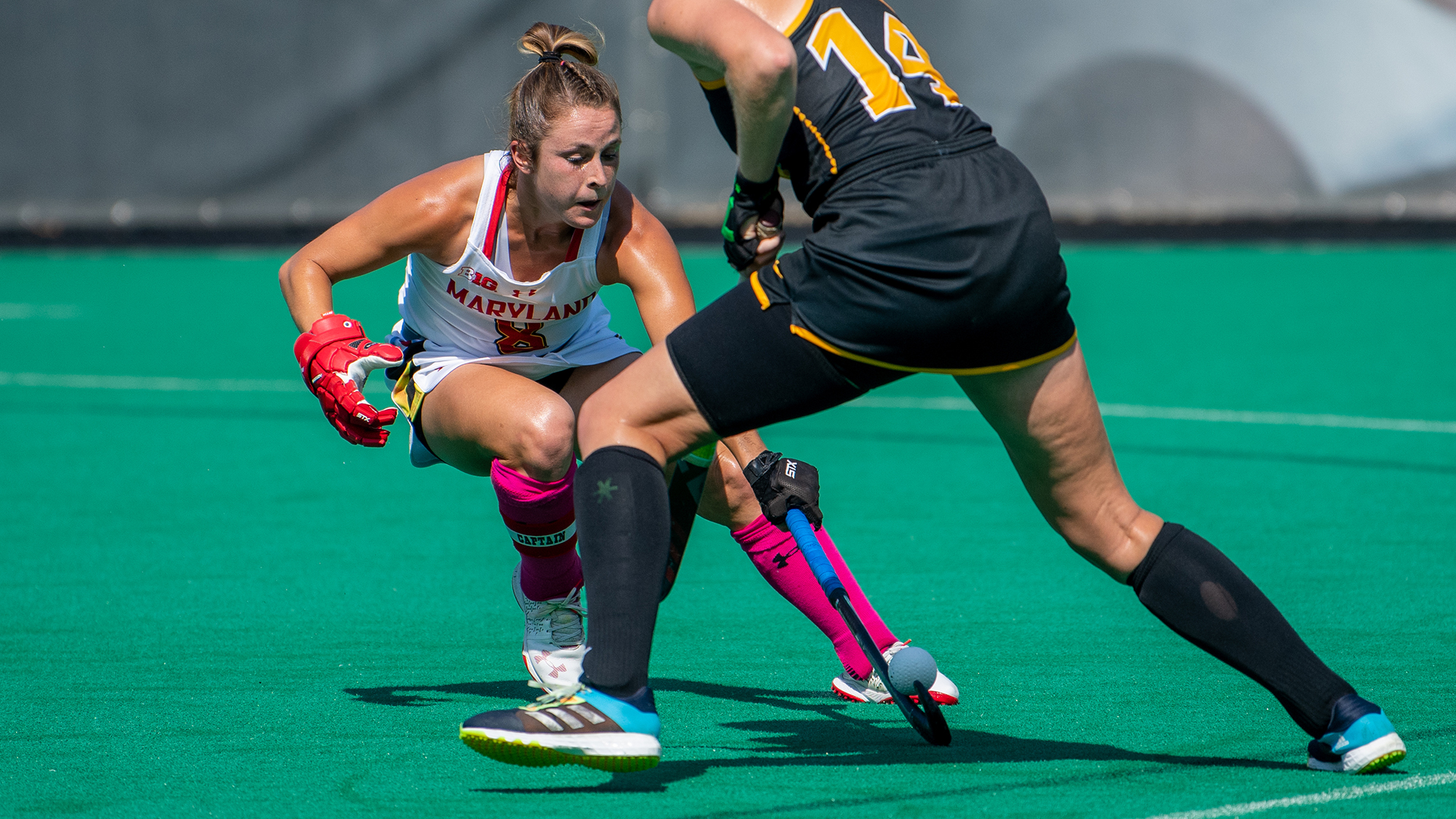 Brooke DeBerdine stickhandles past a defender during No. 7 Maryland field hockey’s 2-1 loss to No. 1 Iowa on Oct. 3, 2021. (Joe Ryan/The Diamondback)

After No. 7 Maryland field hockey’s tight 2-1 loss to No. 1 Iowa on Sunday afternoon, the Terps spent quite some time huddled after the match finished.

They were having a longer-than-usual meeting on a shaded part of the Field Hockey and Lacrosse Complex pitch with coach Missy Meharg. Eventually, captain Brooke DeBerdine and other players addressed the team.

Moments later, Meharg walked over to speak with the media. And as always, the winningest coach in Maryland athletics history had a smile on her face.

“I’m not sure what to say,” Meharg began, laughing, before getting into her disappointment with the loss and optimism moving forward.

Meharg preaches the importance of staying positive. The Terps suffered two losses this week — both of them against top-five opponents.

Thursday’s 3-1 loss to No. 4 Northwestern had the feeling of a blowout despite the fact that Maryland outshot the Wildcats. And on Sunday, the Terps had the top-ranked team in the nation’s number for much of the match. They pulled off six stops on penalty corners in the first half and answered the Hawkeyes’ first goal within the first minute.

“There’s a lot of things that happen as student athletes, as people, as teams off the field that can find their funky little way onto the field,” Meharg said. “We need to stay as positive as possible.”

Brooke DeBerdine is in her fifth season with the program and her second as team captain. She’s been echoing the same mindset as her coach.

The whole team has been saying that field hockey is a game that could come down to details, and while nothing is more important than the scoreboard, there’s a lot more to the game than just scoring.

“We are definitely not down. We know we’re in every game that we’re playing right now, whether you’re looking at the score or not,” DeBerdine said. “We’re excited for the rest of the season. We’re not gonna get down, we’re gonna keep going.”

Outside of the stellar penalty corner defense shutting down one of the best offenses in the nation, there were plenty of other bright spots for the Terps on Sunday.

Maryland got on the board just a few minutes after Iowa ended a nearly 45-minute stalemate. The Terps tied it on a penalty corner, as Riley Donnelly executed on her signature drag flick shot to tie the game in the fourth quarter.

It’s a technique she used a lot in the spring, and has now been working on improving with assistant coach Scott Tupper, who also uses a drag flick shot.

“[Tupper has] been great, helping us with our penalty corner attack and, especially me with the drag flick,” Donnelly said. “It’s muscle memory with that sort of thing.”

The players came out of the huddle disappointed, but still hopeful and excited. And the worst may not yet be behind them. They have seven more matches in the regular season — six of them against ranked opponents.

“Thankfully, we have a great strong schedule and everybody we’re playing is in the top 10,” Meharg said. “And thankfully, the Big Ten is that level, and we’re in it.”