No. 7 Maryland field hockey shut down by No. 4 Northwestern, 3-1 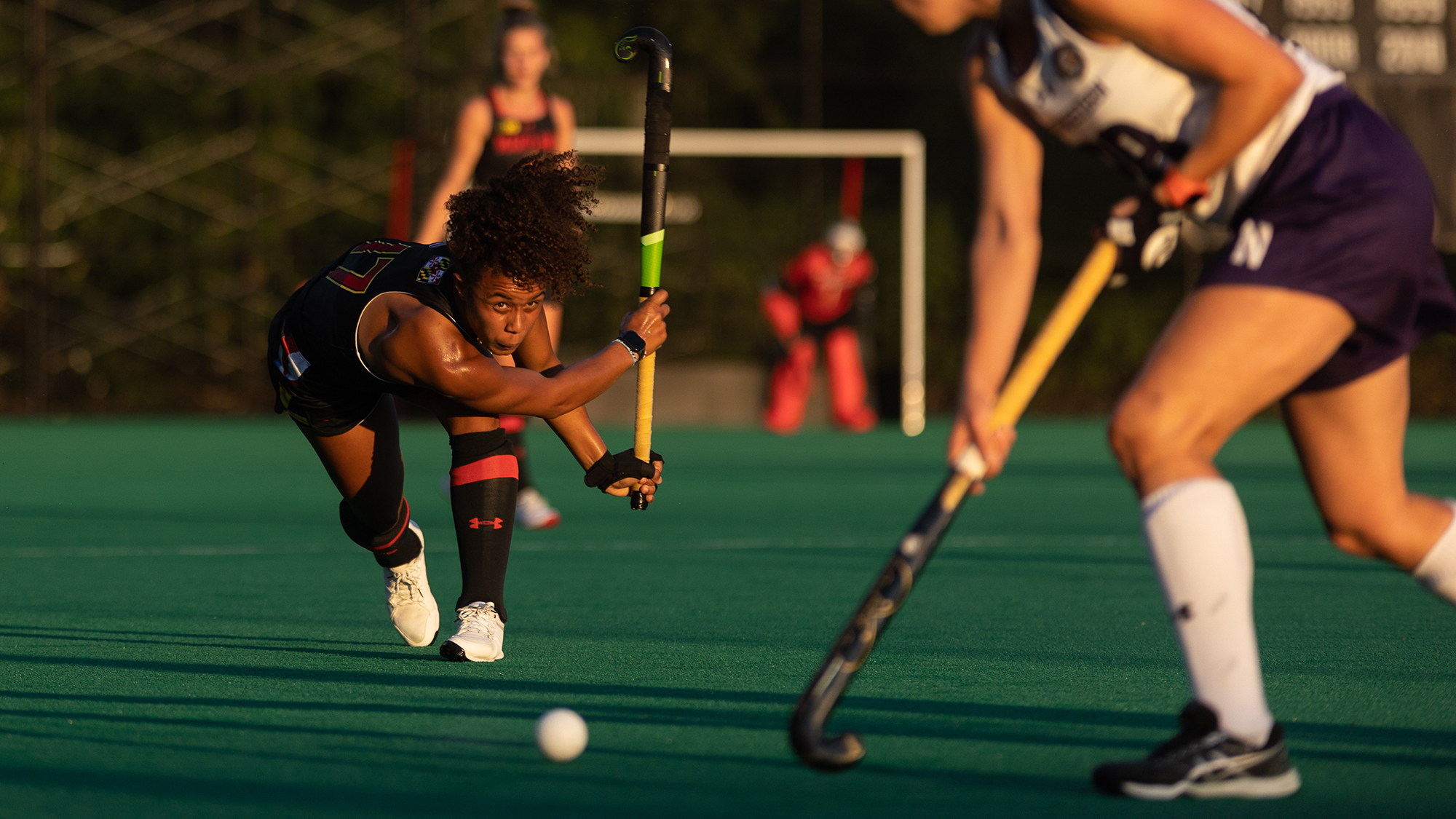 Maryland field hockey was being shut out by Northwestern late in the fourth quarter. But it wouldn’t go down without a fight.

As the Terps attacked, Anna Castaldo rifled a shot that missed. Mayv Clune drove downfield and nearly escaped a tough 1-on-2 battle. But neither could find the back of the net.

Finally, Hope Rose broke through. She continued her hot streak, nailing a goal with 25 ticks left.

But it was too little, too late. While the Terps and Wildcats each took 11 shots, a trio of scores from No. 4 Northwestern gave it a hard-fought 3-1 win on Thursday evening.

“If you’re going to make unforced errors in the belly of the field, you’re going to pay against any great team,” coach Missy Meharg said. “We dominated in many aspects of the game.”

Two of the top offenses in the Big Ten began the first five minutes of the match shotless. That was when Rose flew down the pitch with her explosive speed, and before she could take a shot, drew a penalty corner.

Rose ended up being the beneficiary of Bibi Donraadt’s penalty corner insertion, and the shot sailed wide.

Northwestern (9-2) answered with a strong try of its own a little over a minute later. But the Wildcats’ contingent in the Field Hockey and Lacrosse Complex bleachers’ excitement was cut short, as Bente Baekers’ try was stopped by Maryland (7-3) goalkeeper Noelle Frost.

After a series of missed passes in the midfield, the Wildcats had two players flying down the pitch with no defenders in front of them but Frost in the net.

Baekers led the two-on-goalie charge. She took a shot, and Frost dove to her left to save it. But it was still loose, and Maddie Zimmer made a heads-up play to snag the shot and go-ahead score.

“We’re able to stop them on their breakaways, but when they’re quick enough to make the transition forward, we have to organize a bit more,” defender Rayne Wright said.

Once Northwestern drew its first corner, it continued its strong attack. The Wildcats got a couple of shots off before drawing another corner. The shot didn’t fall, and Maryland got the ball out of the backfield.

Late in the second, Northwestern appeared to get a backhanded score off a corner. But as the Wildcats were celebrating what they thought was their second goal, it was waved off.

The Terps took advantage and drove downfield. Rose took a promising shot, but it deflected off the side of the cage.

In the third, Northwestern appeared to draw a corner, but the Terps used their referral and the call was overturned.

But it didn’t matter for the Wildcats. A little over a minute later, they found the back of the net.

Northwestern drove toward the cage. A shot bumped off Frost’s chest, and Clara Roth was right there to push the rebound past her. Rose collected her seventh goal of the season and gave the Wildcats a 2-0 advantage.

As the sun fell and the lights shined at the Plex, the action intensified. Maryland drew a corner, and Maura Verleg’s shot barreled toward the cage. But it banged off the post, and the Terps’ score stayed at zero.

From there, Northwestern was firing on all cylinders. Off a penalty corner, Baekers rifled a shot and scored. And the Wildcats took a 3-0 advantage.

“We’re definitely staying positive,” Brooke DeBerdine said. “We’re very aware of what we need to clean up because Iowa will exploit the mistakes that we made around the circle if we aren’t strong.”