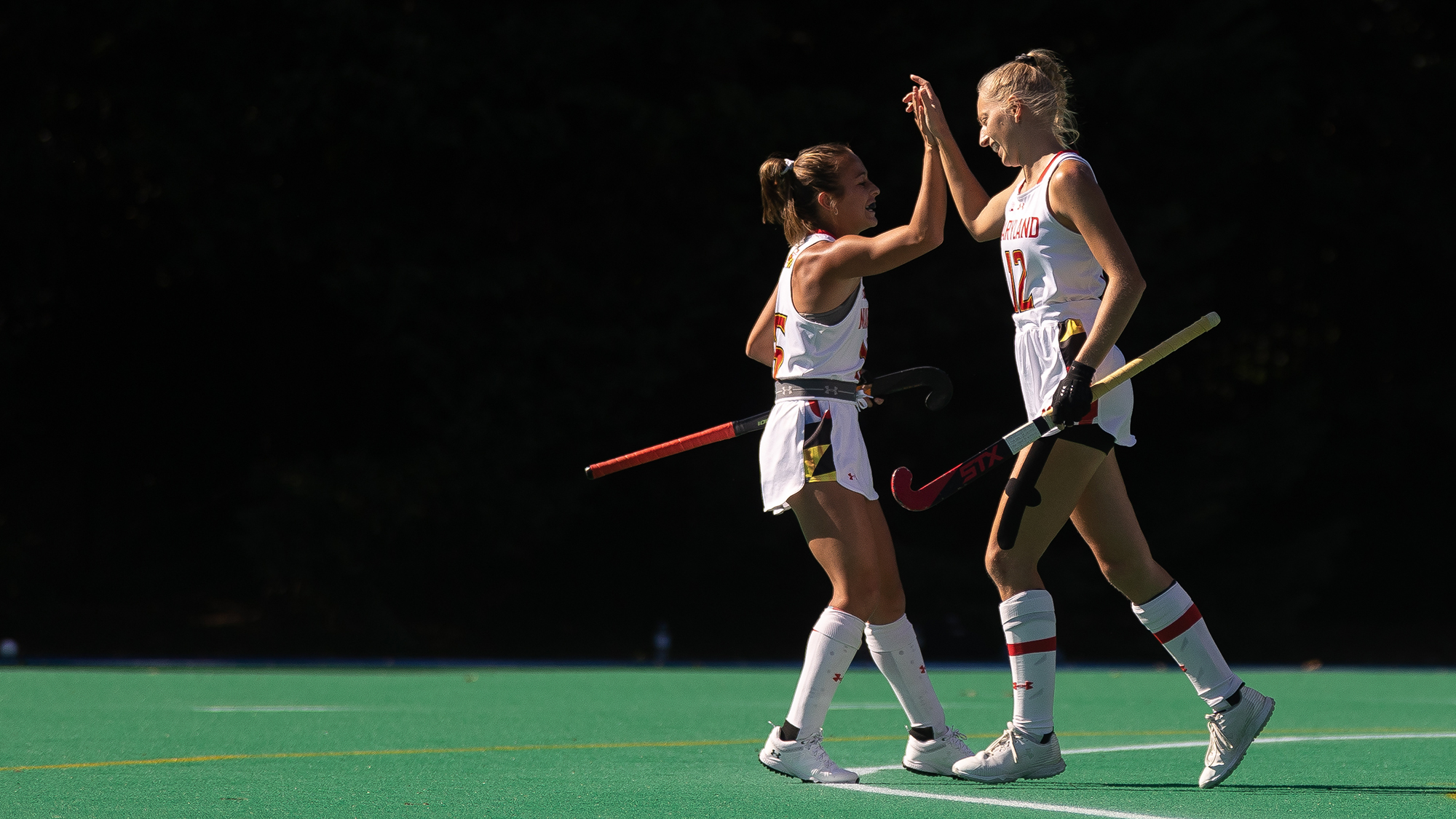 As No. 7 Maryland field hockey wrapped up a 4-0 shutout of American in Washington, D.C., on Sunday afternoon, the Terps gathered together and high-fived each other. They’d just finished playing four games over a span of nine days, which included a trip to and from Bloomington, Indiana.

And after coming up short in overtime against No. 8 Penn State at the onset of that swing, Maryland got a three-game win streak going.

“Our sustained dominance through passing was exceptional — the best match of the year so far with that,” coach Missy Meharg said after beating the Eagles.

The Terps (7-2) rose two spots in this week’s National Field Hockey Coaches Association Poll after going 3-0 over the last seven days — which also included an overtime win over No. 17 Princeton and an 8-2 thrashing of Indiana.

[No. 9 Maryland field hockey cruises to 4-0 win over American]

But while Meharg and her team have gained plenty of confidence from these wins, they have two of their biggest tests of the entire season coming up in the next week — No. 4 Northwestern and No. 1 Iowa visiting College Park.

Maryland last faced the top-ranked team in the nation in the 2017 and 2018 national championship games, when Meharg’s squad fell to UConn and North Carolina, respectively. The last time the No. 1 team came to College Park was Oct. 23, 2016 — and the Terps pulled off a 2-1 win over top-ranked UConn.

And as Meharg looks toward this weekend, she’s still very confident in her team.

Against American, the Terps scored a couple of goals in the first quarter that set the tone for the rest of the match. But they haven’t gotten off on the right foot in every match this year.

“We’ve had some rocky starts, and great teams self-adjust and figure out how to change things,” Meharg said. “And these guys are a great team.”

In that game against the Eagles, Meharg’s defense held American to just five shots, three of which were on goal and all were saved by goalkeeper Noelle Frost.

The defense is one aspect of this “great team” Meharg has that has been preventing its opponents from even getting chances to find the back of the cage.

“Having somebody you trust that much in the back is very easy, but at the same time, you never want to disappoint her so you got to stop the ball first,” defender Rayne Wright said.

On the other side of the ball, the Terps peppered the Eagles with 27 shots. But in Maryland’s six-goal win over the Hoosiers on Friday, it only took 13 shots to Indiana’s 17.

“We had a lot of shots because we were attacking so much today, and we were really controlling the front field,” midfielder Emma DeBerdine said.

And as these gritty offensive and defensive units look ahead to their matchups with such high-caliber schools, they’re not intimidated. They know that if they continue to do what they’ve been doing and focus on how they can improve themselves, they’ll be ready.

“We’re just gonna keep doing what we’re doing, and keep working on the small detail things,” Meharg said. “Watch some videos of ourselves, the more we can see of ourselves and make the adjustments.”

And it starts with that defense. Meharg and the Terps hope to bring their dominant mentality into two of the ultimate showdowns in college field hockey this weekend.