No. 9 Maryland field hockey cruises to 4-0 win over American 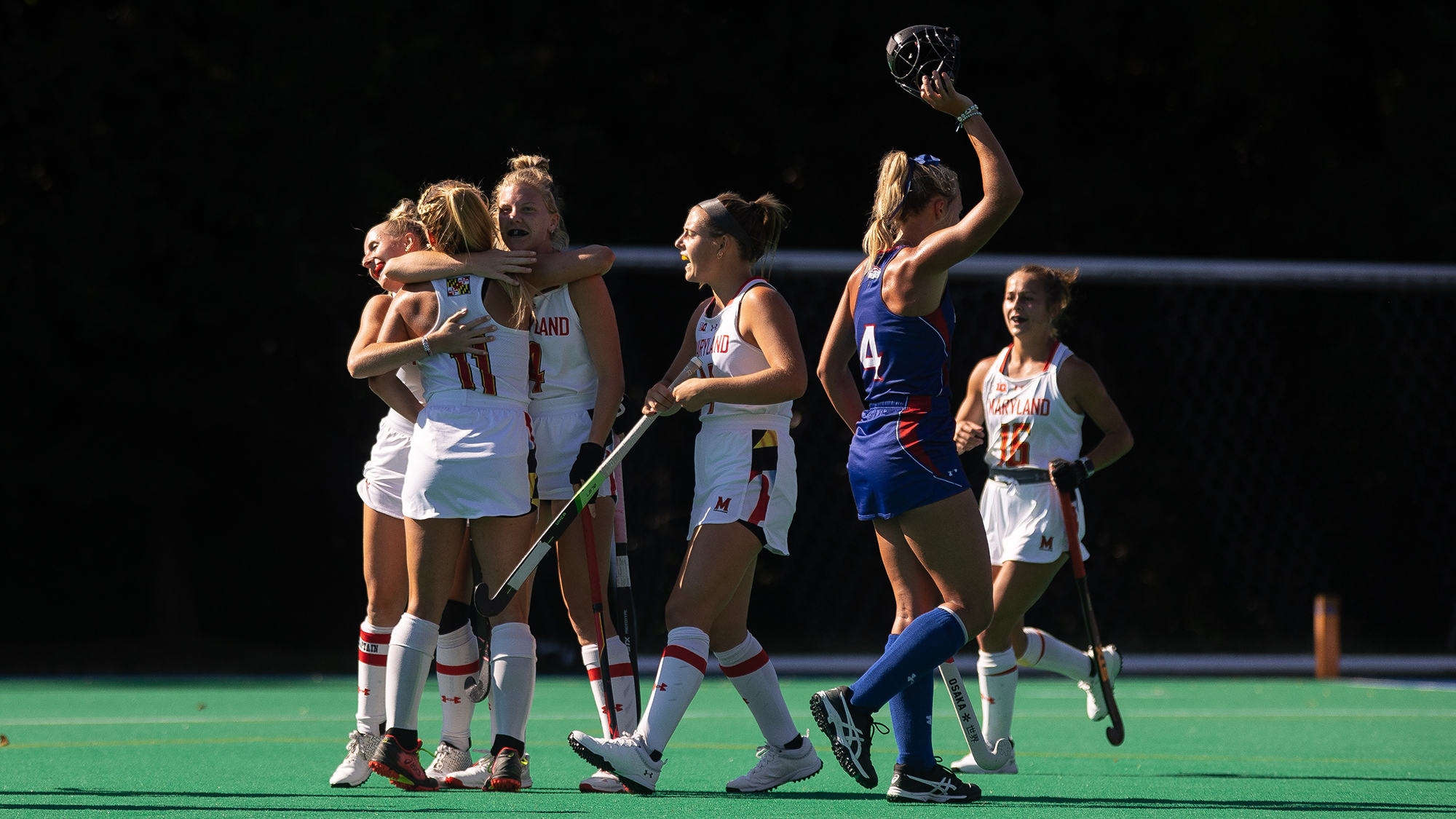 WASHINGTON — In what coach Missy Meharg says is always an exciting matchup, No. 9 Maryland field hockey continued to have American’s number Sunday afternoon.

After an unsuccessful Eagles penalty corner early in the fourth quarter, the Terps drove upfield, and Emma DeBerdine buried an unassisted goal. Along with a pair of goals from leading scorer Bibi Donraadt and Hope Rose’s third goal in the last two games, Maryland rolled to a 4-0 win over its local foe.

“[American coach] Steve Jennings always has such a formidable team,” Meharg said. “Our sustained dominance through passing was exceptional. Best match of the year so far with that.”

Just over five minutes into the match at a warm and sunny William I. Jacobs Complex, Meharg’s squad got its offense going first.

As American (5-3) started to bring the ball up from the backfield, Donraadt swiped in and stole it. The senior forward fed it to Rose, who buried the shot — giving the Terps an early 1-0 advantage.

The goal was Rose’s third in the last two games, and the fourth in her freshman season.

Before letting the Eagles even bring the ball near Maryland goalkeeper Noelle Frost, the Terps found the back of the net another time in the opening period. And again, Donraadt was all over the play.

After dribbling it into the circle, the senior forward deflected in a cross. Donraadt’s team-high sixth goal of the year extended her team’s lead to 2-0.

“We just got out on the front foot,” Meharg said.

Maryland (7-2) commanded the ball throughout the opening period, holding American without a single shot on goal. Early in the second quarter, the Eagles got the ball downfield and drew two penalty corners — both of which were unsuccessful.

Minutes later, the Terps drew a penalty corner of their own that resulted in a promising look. Julianna Tornetta handled the shot off DeBerdine’s insertion, and fired a rocket. It deflected off American goalkeeper Bryn Underwood and into the cage — but the trail official overruled what appeared to be Maryland’s third goal.

Midway through the third, a fine defensive play from Rayne Wright forced the Terps’ seventh corner of the match.

“It’s a lot of just coming together thinking as one and then moving it forward,” Wright said.

After her insertion, Donraadt hopped back on the pitch to try and knock the ball past Underwood, but was unsuccessful.

Maryland had several chances off rebounds in that sequence, but none of those shots fell. But the Terps’ aggressive play quickly drew themselves another corner — one that resulted in a score.

Off the insertion, Tornetta found Donraadt for her second goal of the match.

The Eagles thought they may have had a chance at something in the fourth quarter, when they drew a penalty corner. But Frost turned the shot away, and the shutout remained intact.

And Maryland worked quickly after that, with a coast-to-coast fast break setting up DeBerdine’s score.

“Our corner defense is just incredible this year,” DeBerdine said.

After the match concluded, the players jogged up and down the pitch — as they always do — to an applause from their large crowd of supporters. The Terps had just picked up their third win in a row before two of the top three teams in the country visit College Park.