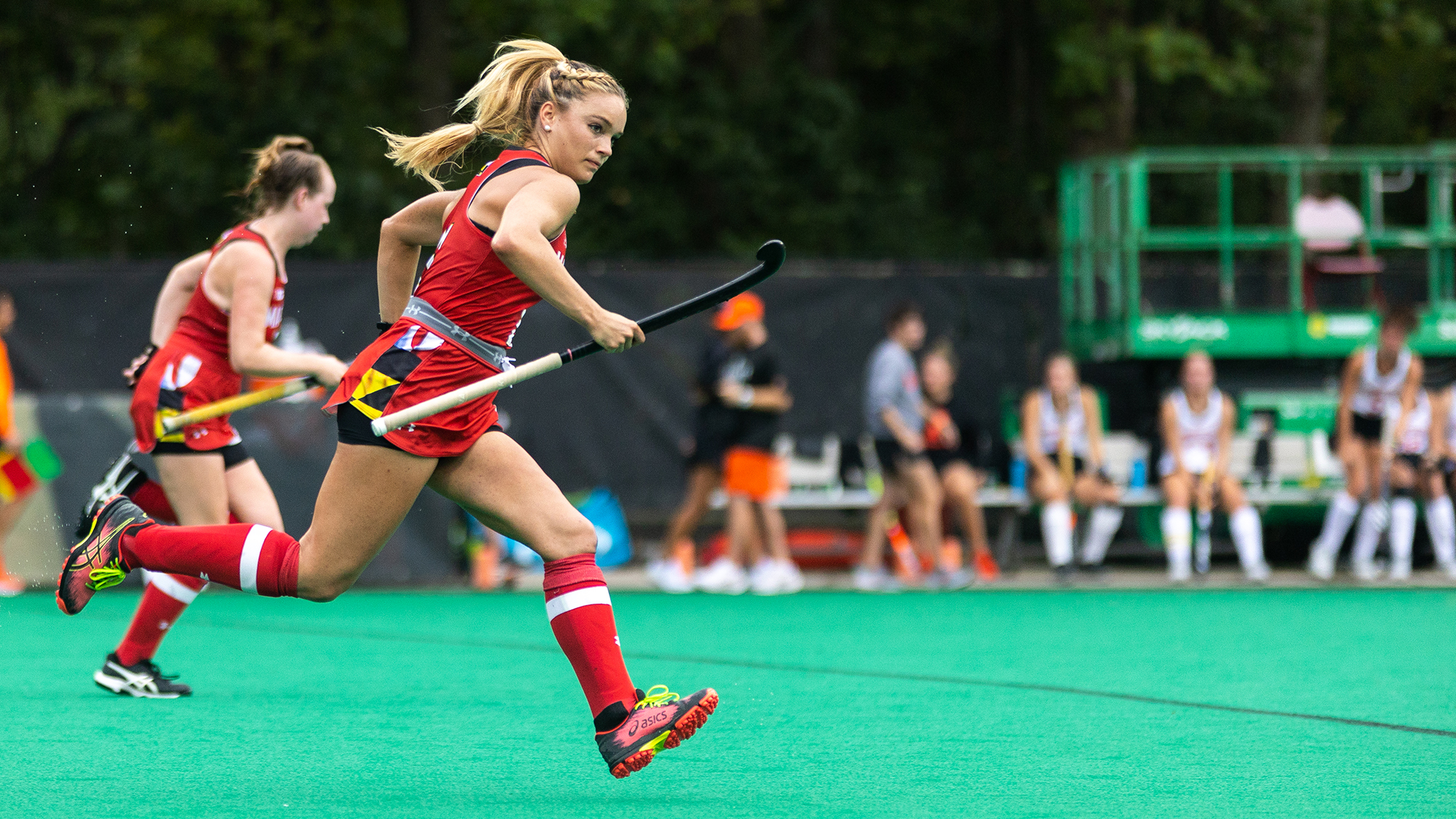 No. 9 Maryland field hockey trailed Penn State at the half Saturday, despite leading in nearly every other category on the stat sheet.

After the Terps fell to the Nittany Lions in overtime that day, they rebounded for a 4-3 win in overtime against No. 17 Princeton Tuesday.

“You can play 95 percent of the game and play really, really well, and just make a couple of mistakes,” coach Missy Meharg said. “Our team is gonna make you pay.”

Immediately following the Penn State loss, Maryland went to the film room and focused on correcting little mistakes before a quick turnaround against Princeton.

And it paid off.

“We spent a lot of time watching film and just actually just trying not to ignore what we did wrong in that game,” captain Brooke DeBerdine said. “Because that was essential to being able to move on with the attitude that we did into this game.”

A lot of the time, fixing the minute errors starts with a strong defensive unit.

In the second quarter of Tuesday’s match, Princeton was moving the ball in the backfield, and not much action was going on. Then Margot Lawn made something happen.

The Louisville transfer used her stick to swipe the ball from the Tigers’ defender and proceeded to charge toward the cage. She found an open Emma DeBerdine, who buried a shot that gave the Terps a lead.

“If we can move the ball from the city side to the countryside, quickly, in two passes, then we’re gonna be in a great, great place,” Meharg said.

No matter how much the team practices, they’re always prepared for unpredictable moments that may pop up in games.

In overtime, only seven players took the pitch for each team instead of the usual 11. Emma DeBerdine was assessed a five-minute yellow card penalty during the final two minutes of regulation, so the Terps had just five field players to start extra time.

“Even with Emma off the pitch, we know how to … keep the ball, keep position,” said Maura Verleg, who collected the game-winning goal. “I think that we did a really good job with that.”

[‘This is my team now’: Maryland field hockey’s Julianna Tornetta to play her former team]

Once they were back at even strength, the Terps drew a penalty corner to set up Verleg’s golden goal. The team practices penalty corners all the time, but rarely in a seven-on-seven scenario.

“We’ve done it twice and maybe we should do it more,” Meharg said. “We’re gonna do it a lot more.”

The Terps will travel to Bloomington, Indiana, Friday for a nationally-televised date with the Indiana Hoosiers, before returning to the area to play at American on Sunday.

But no matter who her team is facing, Meharg always wants to make sure her players are focused on what they can do to help the team win.

“For us, it’s about focusing on Maryland,” Meharg said. “And keeping the ball and the shapes of our attack very secure.”