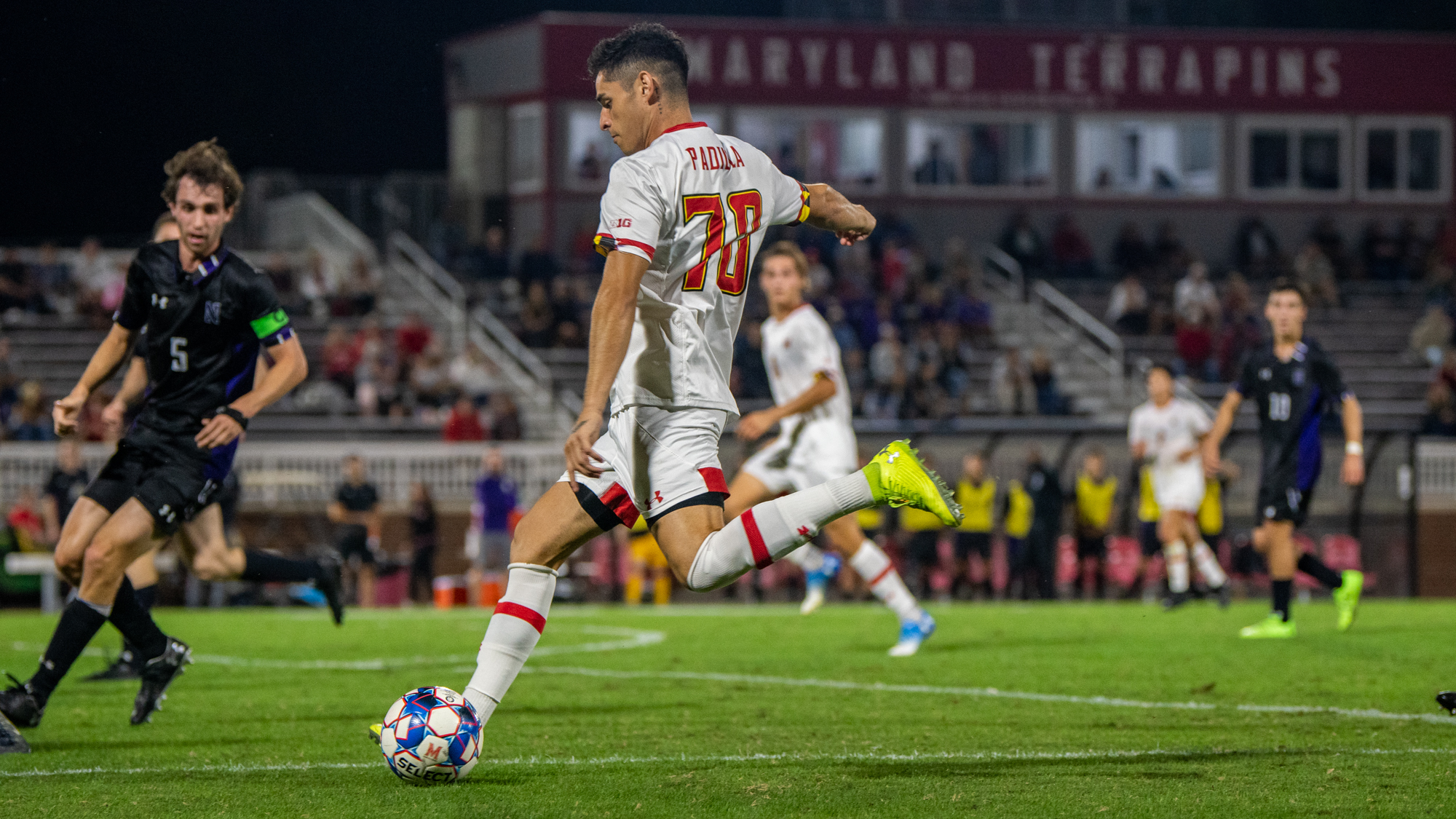 They were pitted against each other in an important Friday night matchup as each team battled and fought hard through 90 minutes. And at the end, as Cirovski stood tall in victory, the old friends reunited and embraced, holding the precious moment for second after second.

Riding a strong second-half offensive ignition, Maryland cruised to a 3-1 win over Northwestern at Ludwig Field.

“It was tough for me before the game … to get super jazzed up [coaching against Russell],” Cirovski said. “But once the whistle blew, we wanted to kick their ass.”

Maryland men’s soccer found itself in a disadvantaged position to dawn Friday night’s game. The Terps were missing a pair of key defenders with Brett St. Martin out with a red card and Nick Richardson sidelined with an injury.

But even with some pieces missing, the Terps came out with a vengeance on offense.

But the early promising advances came up empty. And now, it was Northwestern’s turn to fire back.

As defender Chris Rindov looked to clear the ball out of the backfield, the Wildcats’ Vicente Castro poked the ball out of his possession with no Maryland defenders in sight. Castro sprinted, escaping two defenders, and slammed the ball home for Northwestern.

“I thought we were very good defensively,” Cirovski said. “We pressed well, we connected, we won a lot of balls, we didn’t give them very many chances. We gifted them one goal and then they had one really good chance the rest of the game.”

The Terps found themselves down 1-0 early in a decisive matchup that could send them to 0-2-1 in their last three. Battling with the Wildcats and exchanging inconclusive shots, Maryland came the closest on a middle chance by midfielder Ben Bender that flew high.

But the lately-troubled Terps cracked it open with a spectacular play.

Forward Brayan Padilla received the ball outside of the box. He planted and fired a pass that curved and sliced through the air towards multiple Terps players, including forward Justin Gielen.

Gielen didn’t hesitate. Lunging his forehead out, he made contact and the ball fell into the net’s malleable embrace for the tying goal.

After scoring their first goal in two games, the excitement seemed to ring just a bit louder at Ludwig Field. But with a lot of soccer left to play in the half, both teams slunk to a quiet end.

Maryland didn’t wait long to make some noise in the second half.

Capitalizing off a misplaced Wildcats’ pass, the Terps aggressively advanced the ball with a couple winding passes. At the end of the line, forward Jacen Russell-Rowe wound up and buried his shot into the left-half of the net.

Maryland’s offensive attack had been ignited at just the right time. From there, the gas kept pouring over the offensive fire. The Terps launched several shots on goal after Russell-Rowe, most requiring strong efforts from the Wildcats’ goalkeeper, as Northwestern struggled to hang on.

“We just asked the guys to more direct and to make sure we’re getting into the flank areas and making their backs turn,” Cirovski said. “I thought we did a great job of that in the second-half. You could sense that there was some tired legs in the backline.”

A close-range chance from the Wildcats in the 56th minute threatened to even the score again but a pivotal save from goalkeeper Niklas Neumann helped keep Maryland’s lead.

Despite the effort from the Wildcats, Maryland’s offense cranked forward like a well-oiled machine. The Terps added another goal off a penalty kick from midfielder Malcolm Johnston in the 79th minute.

Cirovski’s squad cruised home the rest of the way and claimed victory under the lights on Friday, 3-1.

“I think this was our last Friday game and we wanted to give it all for [the crew],” Bender said. “Turned out well for us on the field.”