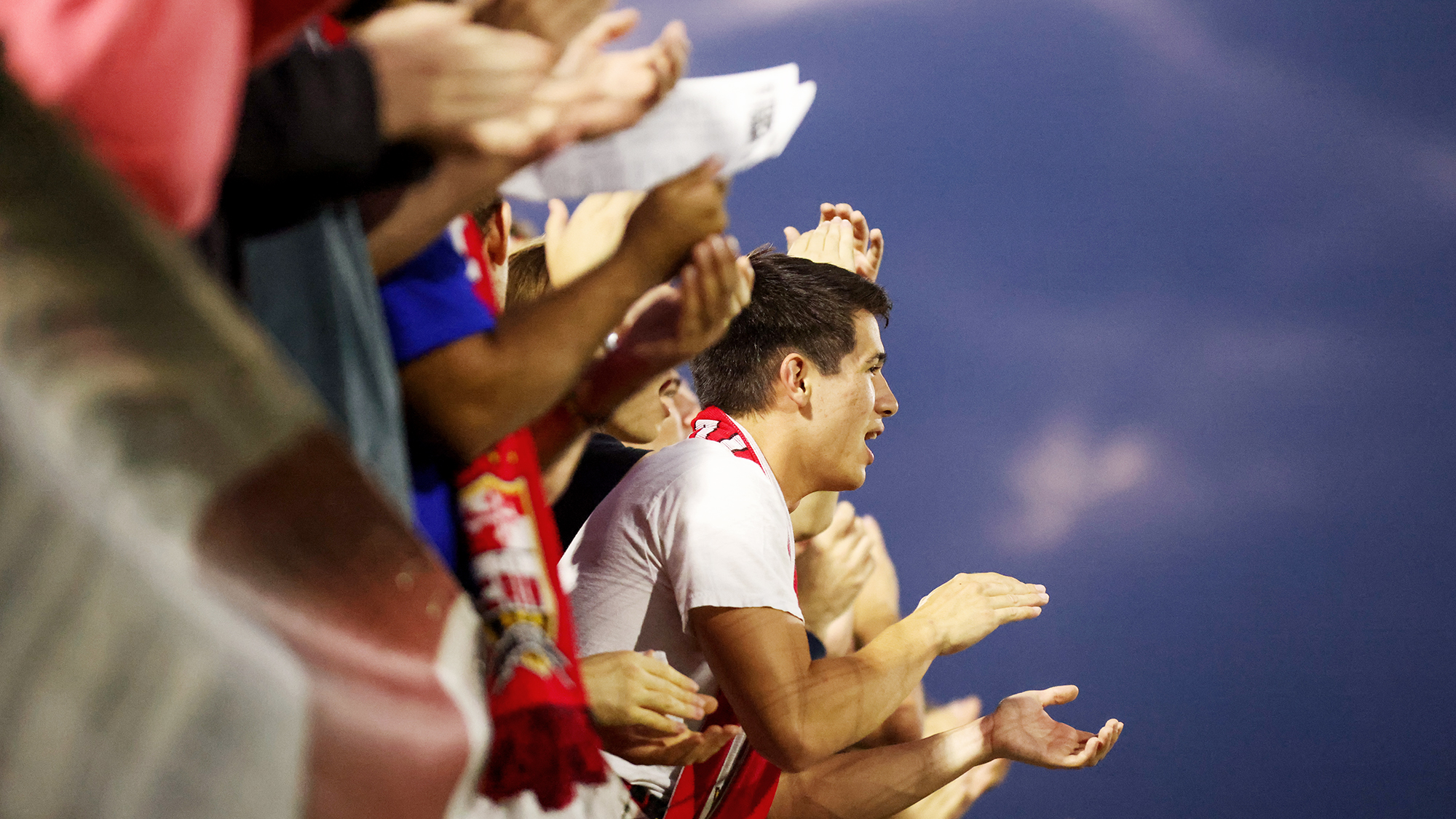 Fans cheer on Maryland men’s soccer during their 0-0 draw against Rutgers on Sept. 23, 2021. (Collin Riviello/The Diamondback)

Programs struggle to gain viewership on nights jam-packed with other televised sporting events, from college football to professional soccer.

Maryland men’s soccer coach Sasho Cirovski had a solution. Playing soccer on Friday night manages to both avoid upsetting other popular sports schedules along with presumably establishing excitement and expectation for a night dedicated to college soccer.

“It makes perfect sense that this was what the students were yearning for,” Cirovski said. “We started [it] here at Maryland and built it up and I think we’ve affected a lot of people changing their days to Fridays.”

The tradition has thrived lately for Maryland men’s soccer. They’ve compiled a 4-2 Friday-night home record since 2019 and haven’t lost in those conditions since a 1-0 decision to Indiana in the same season’s Big Ten tournament.

“The crew does its part … it really motivates us and the other team, it keeps them on their toes, puts a little bit of fear [in] them,” forward Brayan Padilla said.

The Terps will face Northwestern on Friday night as they renew a years-old tradition. For Maryland, this game is more pivotal than most they’ve played so far. The Terps are looking to end a two-game skid. But if they can’t do the job, it could mark a definitive slide for Cirovski’s squad.

It also marks a homecoming for one of Cirovski’s coaching pupils. Russell Payne played goalkeeper for Maryland from 1993-1996 and was an assistant coach for the Terps from 2005-2009. Payne helped Maryland win an ACC championship as a player and a coach and multiple NCAA championships as an assistant to Cirovski.

The former Terp was hired as Northwestern’s head soccer coach in May.

“It’s very bittersweet. You always want to hate your opponent and it’s hard to hate [Payne],” Cirovski said. “I love Russell and I’m very delighted that he got this opportunity to coach at Northwestern. I may have played a small role in that.”

If Maryland’s history against Northwestern reflects at all on the game, it will be a match drowned in emotion and sweat. To wake up from a 0-1-1 stretch, the Terps will need to become the team they were at the beginning of the season.

“We all need to come back to what we’re good at,” defender Alex Nitzl said. “What are our strengths … what’s the identity of this team, and I think we had a good meeting and all together we’re on the same page.”

While the fans and the emotional connections remain, it likely won’t be the end-all for the Terps. Shuttering a two-game goalless streak remains an obvious path to victory and Maryland will try to do it where they are most comfortable: With the moon hovering over Ludwig Field as the weekend begins.

“It doesn’t matter. Every game is won inside the white lines. We know that although our fans will help, it comes down to the players fulfilling their roles to the best of their ability,” Cirovski said.