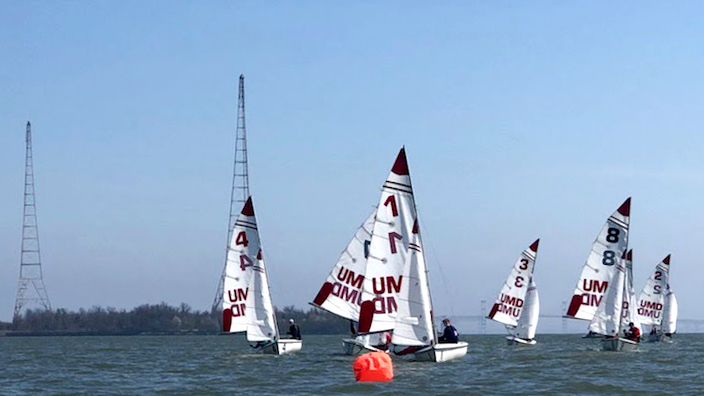 This university's club sailing team is one of the club sports teams affected by the policy. (Photo courtesy of Anna O’Connell)

The University of Maryland is prohibiting club sports teams from competing against schools without a vaccine mandate, upending seasons and prompting frustrations among students.

The university released a memorandum in August, outlining travel guidelines for student organizations. The memorandum defined nonessential travel as travel that is not a class or academic program requirement and will not result in a negative impact on business continuity. Travel for club sports teams is considered nonessential.

Members of club sports teams say the restrictions have forced them to change their season plans, with some having to withdraw from tournaments. If a tournament includes any team without a vaccine mandate — even if the entire team is vaccinated — this university’s team cannot participate.

RecWell is willing to consider exemptions on a case-by-case basis if the club can address concerns around interacting with a team that comes from a school without a vaccine mandate, Crawford said.

Crawford expects the turnaround for exemption proposals to take about a month, she said. The process would include “a couple iterations” to ensure RecWell’s concerns are addressed, as well as approval from some of the people who approved the initial policy.

“We need a compelling reason why that particular competition is so integral to the ability of that team to compete in the future,” Crawford said.

Kailey Lauter, the president of the club field hockey team, said the restrictions “ruined” a lot of club sports seasons. In order to qualify for the national tournament, field hockey teams must play a certain number of teams and earn a certain number of points. This university’s team will be unable to play enough teams to qualify because of the restrictions, Lauter said.

“A lot of schools that don’t have the vaccine mandate, their school is still at least 80 or 90 percent vaccinated,” Lauter said.

“If all the players on that team are vaccinated and have proof of vaccination, that shouldn’t be a problem safety wise,” the junior cell biology and genetics major said.

Anna O’Connell is the commodore of the club sailing team, which is the equivalent to being the club president. She thinks the restrictions are “really prohibitive.”

The sailing team competes against eight to 20 teams at a time in a typical season, O’Connell said. But with the restrictions, if any team does not have a vaccine mandate, the team has to withdraw, O’Connell added.

The team wanted to compete against the College of Charleston, which doesn’t have a vaccine mandate. She emailed to ask if their team was fully vaccinated, and they responded that they were. However, this university still did not allow the two teams to compete.

The sailing team is in a region where nine schools don’t have vaccine mandates, she said. O’Connell described the situation as “frustrating.”

“Sailing, it’s an outdoor sport,” the senior criminology and criminal justice and government and politics major said. “We have no contact with the teams we’re competing against. We’re in separate boats, we stay easily distanced.”

[Before the ascent: UMD students set routes at the Eppley climbing wall]

Due to the restrictions, the sailing team wasn’t able to go to its regional tournament, O’Connell said. As a result, the team isn’t able to qualify for nationals.

The team was “really looking forward” to nationals this year, O’Connell said, since they hadn’t sailed in over a year and a half as a team. They practice in Annapolis, and last academic year’s restrictions forbade teams from traveling off campus, she added.