Before the ascent: UMD students set routes at the Eppley climbing wall 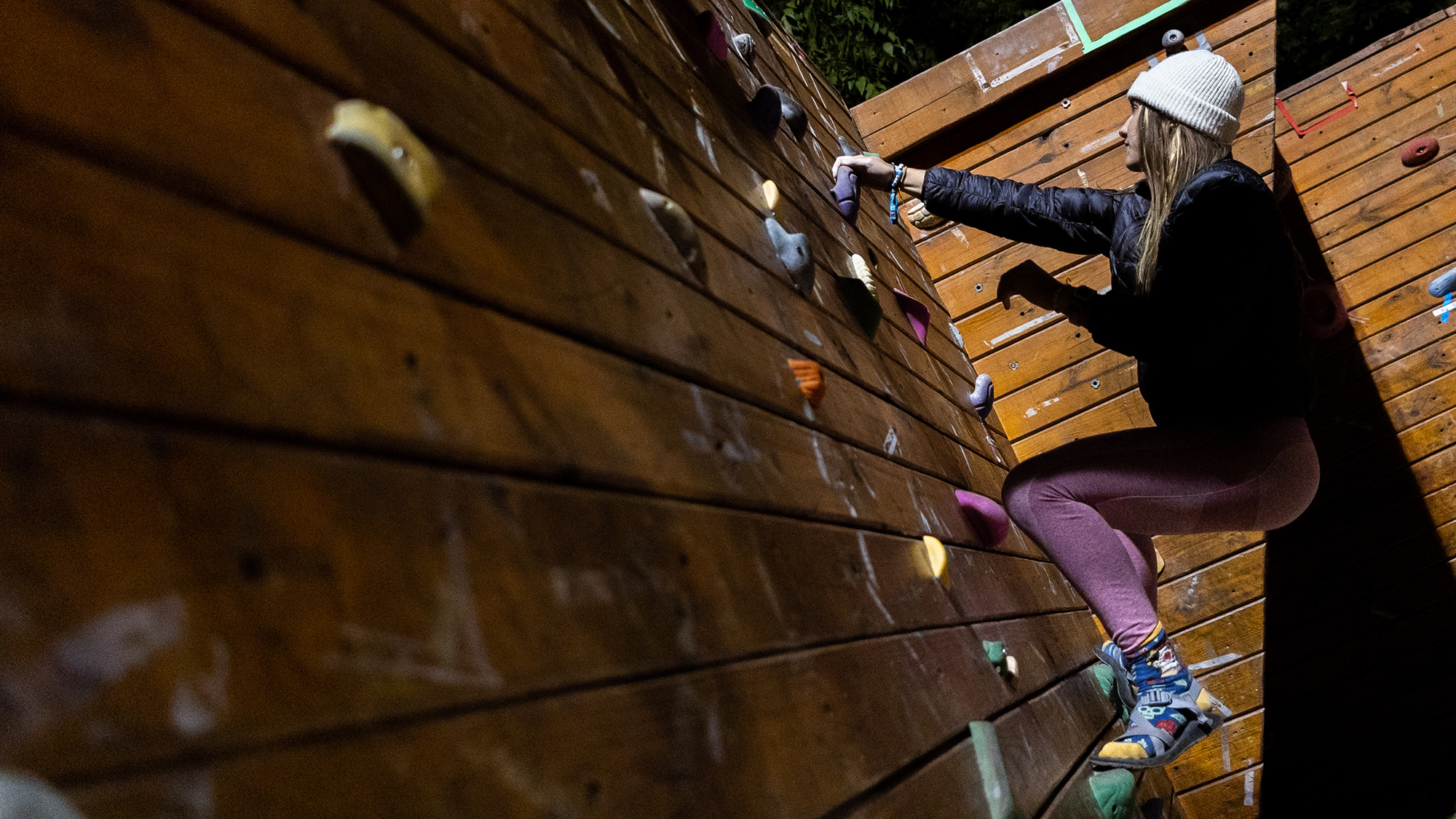 Hidden behind Eppley Recreation Center is a getaway for students who aren’t afraid of heights, but are often covered in chalk and talk in a language of their own.

This oasis, the University of Maryland Adventure Program climbing wall and bouldering grotto, serves as a daily rendezvous for the community it has fostered. At the wall’s center are the route setters — a small but vital group of staffers for this university’s climbing community.

Izzy Hatfield is a climber through and through. She can be found at the wall almost six days a week, split between climbing for her own fulfillment and working as an Adventure Program staff member. The junior environmental science and technology major is one of these route setters.

The weathered wooden climbing walls are covered in three-dimensional plastic shapes of different colors, creating a collage of faded reds, blues and purples. These are the hand and foot-holds climbers use to scale the wall. Some holds can accommodate an entire hand while others are the width of half a fingernail. A collection of holds of a single color forms a route.

The routes that adorn this university’s climbing wall are created by route setters such as Hatfield. They start with an idea for a climb and then make it physical by bolting holds to the wall to accurately represents their vision.

Ben Snyder, a junior computer science and math major, has been climbing for about 13 years and previously climbed competitively. He has been a route setter for a year and a half.

“Route setting is kind of an art,” he said. “You’ve got to make it look good, feel good [and] climb well … It’s about just giving experience to the climber.”

When Snyder sets, his process changes from route to route. Sometimes he may center a climb around a specific hand movement he has in mind or an interestingly shaped hold. But when he sets a hard route, Snyder just throws holds on the wall, adjusts them and sees what sticks.

“There’s times it takes me two hours to put two holds on the wall because I’m just experimenting,” he said.

On a cool Wednesday night, after the climbing wall had closed, Hatfield was hard at work putting up a new route on the wall. It was pink, and she was thinking about what to name it even before the first holds were bolted to the wall.

She placed the first two holds, which were no wider than a single finger pad, on the wall, forcing the climber to straddle an overhanging corner. Moving to the left and up, Hatfield placed more hand holds of a similar size.

“I’ll set super tiny holds because I like [climbing] that, and I think other people like it too, like super technical ones,” Hatfield said. “I can also push people to move their bodies in different ways.”

She was not working from a plan — rather, Hatfield was placing holds that felt right, that created a movement sequence that flowed.

Despite a lack of planning, she does follow a setting order. Hatfield always sets a route in the direction it is climbed from beginning to end. She also bolts the hand holds first and then goes back and places the foot holds. For this pink route, the foot holds were minuscule — only a few centimeters wide.

After all the holds were placed, Hatfield traded her Chacos and socks for climbing shoes, chalked up her hands and climbed her route for the first time, which she successfully completed on her first attempt. And without any further modification, Hatfield declared the route finished.

“I’ve impressed myself,” she said.

A few of the other route setters present that night climbed the route, and they collectively agreed it was a V3 climb — the first intermediate grade of climbing difficulty. Hatfield explained that having routes of this grade is really important because new climbers can easily get discouraged if the routes get too hard too quickly.

But the final piece of this pink puzzle was still missing: the name.

Philip Dodge, one of the newest route setters at the wall, says the name is the most important part of the climb. Two of the routes he has set are called “Granny Smackdown” and “Red Malcolm, the unthinkable nihilist.”

The senior electrical engineering major has kept a running list of notes for more than two years where he records random thoughts and from which he often pulls inspiration for route names.

“[The route gets named after] whatever thought that is going through my brain,” he said. “That’s how it works … There’s no actual connection.”

Hatfield names her routes after food because by the time she’s finished setting late at night, she is always hungry. Among her creations is a yellow route named “Taco Sauce.” The route’s color reminded her of a taco shell.

The newest pink route at the climbing wall was dubbed “Kebob Style” in honor of the Krazi Kebob restaurant in College Park where Hatfield is a regular patron.