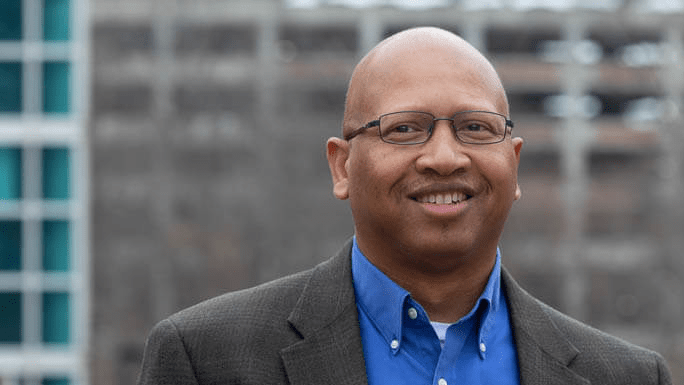 Wilson is an associate professor with the Maryland Institute for Applied Environmental Health, which is housed under the public health school at the University of Maryland. In his career, he’s taken strides to fight environmental injustice and racism.

And last week, the Maryland League of Conservation Voters honored him with the John V. Kabler Memorial Award, which is presented yearly to the state’s most prominent environmental leaders, for his efforts.

Currently, Wilson is working on developing an app for people to collect their own data on features of the environment around them. The app is called My Block Counts, and the goal is to determine who is in the most at-risk environments. That way, he said, researchers can target key resources and investments.

“How are you going to address environmental justice if you don’t know where it is?” Wilson said.

Wilson has done work for various communities and groups, such as Farmington Hills Community Center in Michigan. He and his team looked at air pollution, especially in communities of color in Maryland.

A lot of the communities he analyzed were overburdened by mobile and stationary pollution, such as factories. As a result, Wilson said that his team would build networks to gather data on the pollution. The work they did in Cheverly, Maryland, stretched all the way to Georgia and South Carolina.

Jolene Ivey, the Prince George’s County Council member for District 5, said in an email she has worked with Wilson on a proposal he made for real-time air monitor networks. She said the network would be low-cost and could detect air pollutants in Cheverly.

“He was the driving force to set up a network … to detect hazardous air pollutants throughout the town,” she said.

The goal is to expand the project throughout Prince George’s County. The information would be used to work toward improving the air quality and help the county make development and zoning decisions.

Parts of the county have been “unjustly overburdened” by environmental hazards and have been exposed to air, water and soil pollution, Ivey wrote. At the same time, some residents have “limited access to full-service grocery stores, parks, safe housing and health care,” Ivey said.

“There is a legacy of industrial development, segregation, traffic and lack of investments in communities of color, not only in Prince George’s,” Ivey said.

One of Wilson’s projects took place in Ellicott City, where floods are common. Wilson studied infrastructure to improve the stormwater runoff in their rivers and streams near the Anacostia River.

Each year, Wilson holds an environmental justice symposium. Since the pandemic, the event has been virtual. But the last event was the biggest, with 1,500 total registrants. He had different keynote speakers and sessions for Asian and Pacific Islander issues, homelessness, gender binary, law and other environmental issues.

“He has been a long-time champion for environmental justice,” Ivey wrote in an email. “Through his conferences and extensive activism, he has worked not only to frame and identify the problems, but importantly sought to find workable solutions.”

Maria Payan, a senior regional representative for the Socially Responsible Agriculture Project, met Wilson for the first time in 2012. She said he was fearless, and knew the responsibility that came with his work.

“It was amazing to see someone within the field who was true to himself,” she said.

She said that Wilson wasn’t someone who would go into a community and find the issue, only to leave it. She said that students who can learn from Wilson are getting a gift that will impact their futures.