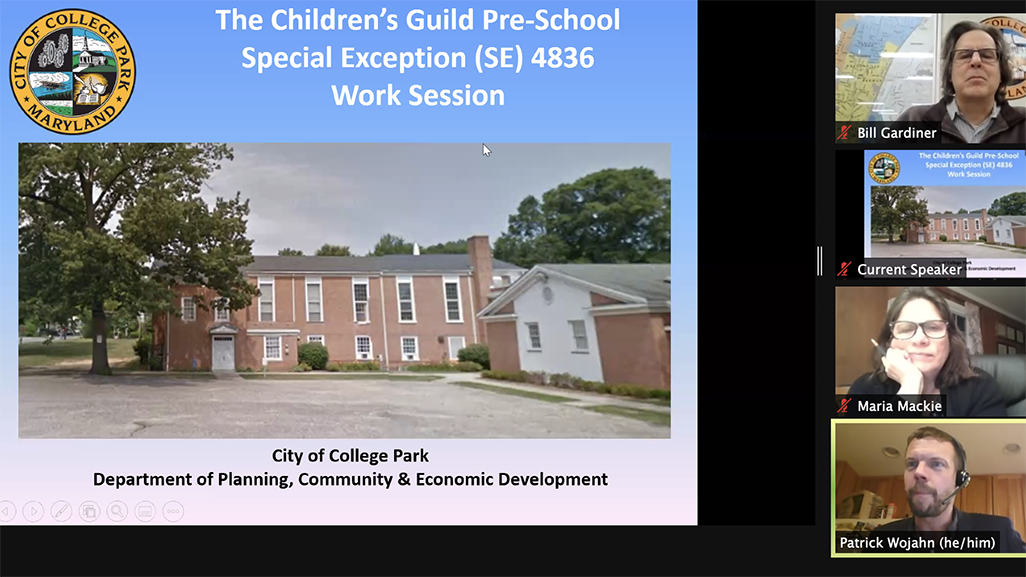 The College Park City Council discussed a request from a preschool for a special exception that would allow it to operate in the College Park United Methodist Church at a virtual work session Tuesday night.

Prince George’s County zoning laws prohibit private schools from operating in R-55 zones — areas mostly composed of single family homes — which is where the church sits. Monarch Preschool, a 50-child day care, is set to open in the church after it passes routine inspections and obtains a child care license. But with an exception from the county, the day care could expand to a 120-child preschool.

The Children’s Guild, Inc., a mental health and education services nonprofit,  proposed plans for Monarch Preschool about four years ago.

The county’s special exception guidelines maintain that private schools — which would include Monarch Preschool’s shift from daycare to preschool —  may operate on properties smaller than five acres as long as the council specifies a maximum student enrollment and an outdoor play area. To meet these requirements, The Children’s Guild has proposed plans to build an enclosed, outdoor 13,000-square-foot play area if granted the exception.

College Park residents have raised questions and concerns about the proposed preschool’s impact on area traffic.

The Children’s Guild is considering adding curbs and modifying existing parking lots to allow for a convenient flow of drop-off and pickup traffic, said Miriam Bader, the city’s senior planner from the Department of Planning, Community and Economic Development.

A traffic study conducted in November 2020 showed that staggered drop-off and pickup times for preschool students would also promote smooth traffic flows around the church, according to city documents.

“I’m totally excited about this project because it’s a very nice amenity for the entire city, especially North College Park, as it will be bringing quality child care to this area,” he said.

Echoing some residents’ concerns at a Feb. 4 Advisory Planning Commission meeting where the special exception was presented, District 4 council member Maria Mackie asked if The Children’s Guild would consider adding more parking spaces at the church to accommodate increased traffic.

Matthew Tedesco, The Children’s Guild’s attorney for this project, said such additions were unlikely because of their projected costs and possible impact on stormwater issues.

“This is not one of those multimillion dollar projects that has an unlimited budget,” Tedesco said. “That’s the theme of this project: … balancing the needs of the use, the responsiveness to the community… but also to be mindful of costs.”

The special exception hearing before Prince George’s County Planning Board is scheduled for March 4.

After the hearing, the special exception will be presented to Prince George’s County’s Office of the Zoning Hearing Examiner, which will approve or deny it before sending it to the county’s District Council, which can appeal the decision if it so chooses.

The Children’s Guild hopes to see the special exception approved by early summer so the preschool can be fully operational for fall 2021, Tedesco said.

In the meantime, Tedesco said, The Children’s Guild is committed to taking community feedback into account and working with the council to iron out the language of the special exception conditions.

“If an issue arises … we’re going to work together to address it collaboratively and resolve it,” Tedesco said.