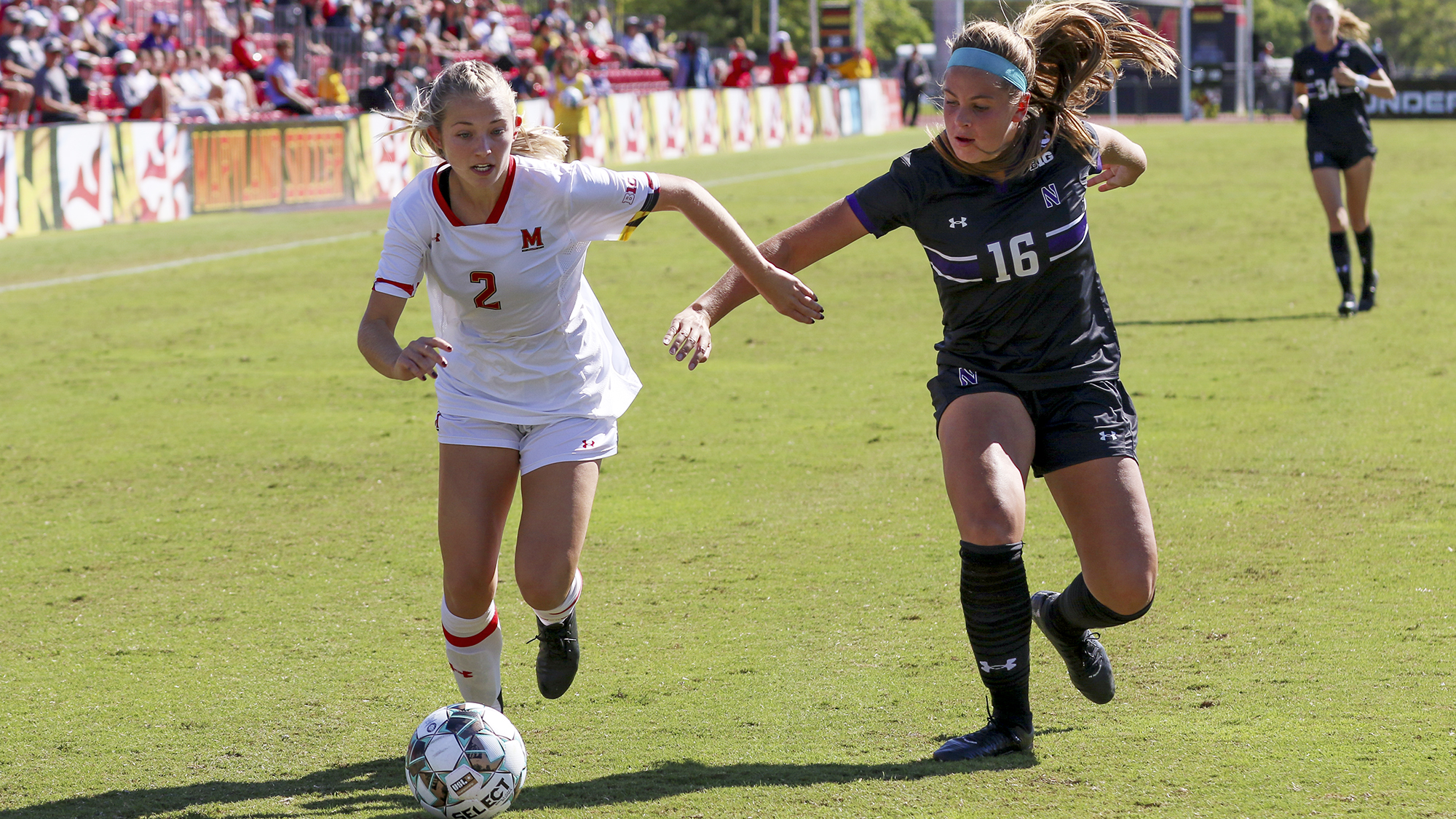 Emily McNesby dribbles past a Northwestern defender during Maryland women's soccer's 1-1 draw with the Wildcats on Sept. 26, 2021. (Cam Andrews/The Diamondback)

Back-to-back losses at Iowa and Illinois last week has seen Maryland women’s soccer fall right back to where they were last season: the bottom of the Big Ten standings.

The Terps sit in last place with two points from five games along with Nebraska, who Maryland tied earlier this season.

Coach Ray Leone’s squad put in a disappointing performance in its first away match of the conference season against the Hawkeyes on Thursday, failing to keep possession and break Iowa’s consistent pressing in a 2-0 loss.

The Terps were then dominated by the Fighting Illini on Sunday, despite Illinois holding an 0-4 record through its first four games of conference play.

The Illini notched 22 shots, 13 of them on target and 14 corner kicks against Maryland. Despite some impressive individual performances, including goalkeeper Liz Brucia making a season-high eight saves, the Terps again failed to consistently create quality chances going forward and was eventually broken down by Illinois.

While Maryland operated better against the Illini in the first half, bagging a goal and looking dangerous on the counter-attack, Leone knows his team needs to put in a full performance to get results in the Big Ten.

“We improved the first half today,” Leone said after the Illinois game. “We were up a goal, and we were playing well, and the energy was spectacular, but it’s a 90-minute game.”

The Terps’ offense failed to deliver in either match, and was once again hampered by Alyssa Poarch’s unavailability due to injury.

Leone hopes to use the longer break between Maryland’s next games to work on his attack, which currently sits at the bottom of the Big Ten in goals scored, with 15.

“We just got to keep fighting, keep playing hard,” Leone said. “Now we’re gonna have a week between games so we can actually practice, and we need to practice some serving and runs again.”

The pair of losses leaves the Terps in a tough spot at the halfway point of their conference schedule, as they now sit five points off qualification for the Big Ten tournament.

Maryland’s schedule doesn’t get any easier, with No. 9 Rutgers and No. 17 Michigan remaining.

And while the Terps started its season looking bright in nonconference play, they’ve failed to continue that into conference play.

Maryland’s Big Ten woes have carried over from last season, as the Terps have now failed to win in each of their last 19 games against conference opponents. And they are now approaching a full two years without a conference victory, with its last coming against Michigan State on Oct. 24, 2019.

If Maryland has any chance of qualifying for the Big Ten tournament this season, they’ll have to turn that record around quickly.

“We’re trying to get this monkey off our back, nobody’s shying away from that,” Leone said. “I told them I’m gonna fight for them … every single second of every single game — and if they all do that, then hopefully we will be able to turn this around … We have half of [the season] left. That’s a lot.”