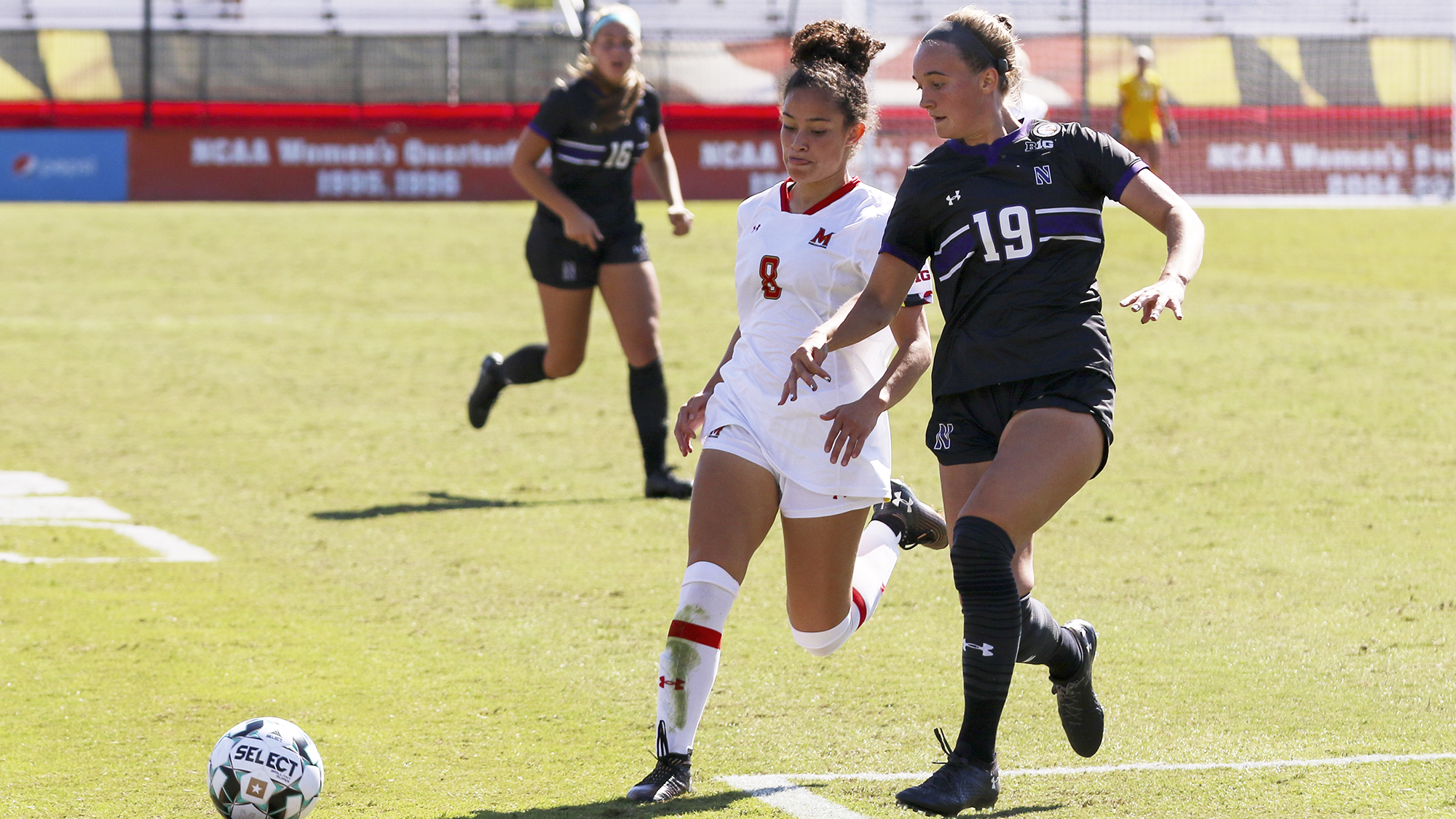 Toni Domingos races a Northwestern defender for a loose ball during Maryland women's soccer's 1-1 draw with the Wildcats on Sept. 26, 2021. (Cam Andrews/The Diamondback)

When Illinois was playing well, Maryland women’s soccer’s defense was up to the task.

The Terps dealt with the Fighting Illini forwards, who looked dangerous throughout the match. But with just 14 minutes left, Illinois was finally able to take the lead.

Maryland goalkeeper Liz Brucia made an incredible initial save, tipping the ball onto the crossbar, and Adalee Broadbent was able to clear the rebound off the line.

However, the third time was the charm for the Fighting Illini. The ball fell to Ashleigh Lefevre inside the box, who made no mistake with her first-time finish.

The goal extended Maryland’s winless streak to eight games, and the Terps missed a huge opportunity against an Illinois team that was 0-4 in conference play before the match.

“It wasn’t a complete performance,” coach Ray Leone said. “It started out very well, moving the ball, attacking well, getting some chances. But in this league, you have to score more than one, and when we had the chance we didn’t do it.”

Maryland got off to a great start, when it took an early lead in the 8th minute. Loren Sefcik made an impressive interception around midfield and drove the ball forward, finding Mikayla Dayes.

Dayes played a great ball into the box for Kori Locksley, who slid the ball over to Hope Lewandoski. Lewandoski’s first-time finish flew past Illinois goalkeeper Julia Cili to make it 1-0 Terps.

Dayes almost doubled Maryland’s lead just four minutes later. The Terps put together a counter-attacking move, and Dayes turned her defender before firing a shot from outside the box. The shot was tipped onto the bar and went out for a Maryland corner.

Illinois had a chance to equalize in the 17th minute when Makena Silber got behind Maryland’s defense, but her shot went just over the bar.

It wasn’t Illinois’s last great chance of the half.

The Fighting Illini poured pressure on the Terps as the half went on, notching six shots on target along with an incredible 11 corners in the first 45 minutes.

Illinois nearly capitalized from one of those corners, but Brucia made a great save on a close-range shot by the Illini’s Eileen Murphy.

While Leone was pleased his team went into halftime with the lead, Illinois’s domination late in the second half was concerning.

“We’re just getting beat on the flank, and we’ve got to correct that,” Leone said. “We’ll have to kind of go and look at the tape and see what we need to do to improve.”

Maryland came out on the front foot in the second half and had a great chance to double its lead in the 48th minute, but Catherine Derosa’s shot was saved by Cili before Lewandoski’s follow-up was blocked.

Illinois tried to equalize in the 60th minute, but Maeve Jones’ shot from just outside the box struck the crossbar and was cleared away.

It didn’t take much longer for Jones to find the back of the net, however, as the freshman tied the game just five minutes later. A good cross from Ashley Cathro set up Jones, who easily finished to make it 1-1.

Illinois should’ve quickly taken the lead in the 68th minute, but Maryland caught a huge break when Hope Breslin put her shot over an open net.

But the Terps weren’t so lucky a few minutes later, when Leferve gave Illinois a 2-1 lead.

Maryland wasn’t able to produce an equalizer as the clock wound down, and Lefevre’s late goal would extend the Terps’ winless streak to eight.

Maryland allowed 13 shots on target and was dominated by an Illinois team that sat at the bottom of the Big Ten standings before the match.

The loss sent the Terps to the bottom of the Big Ten standings at the halfway point of the conference season. Leone and the team are frustrated with their performances so far, and they hope they can improve in the latter half of the season.

“We’re better than we’re showing, and I think that that’s the frustration,” Leone said. “This is a very big challenge for us, that’s obviously a big weight on our shoulders. We’re trying to get this monkey off our back, nobody’s shying away from that.”