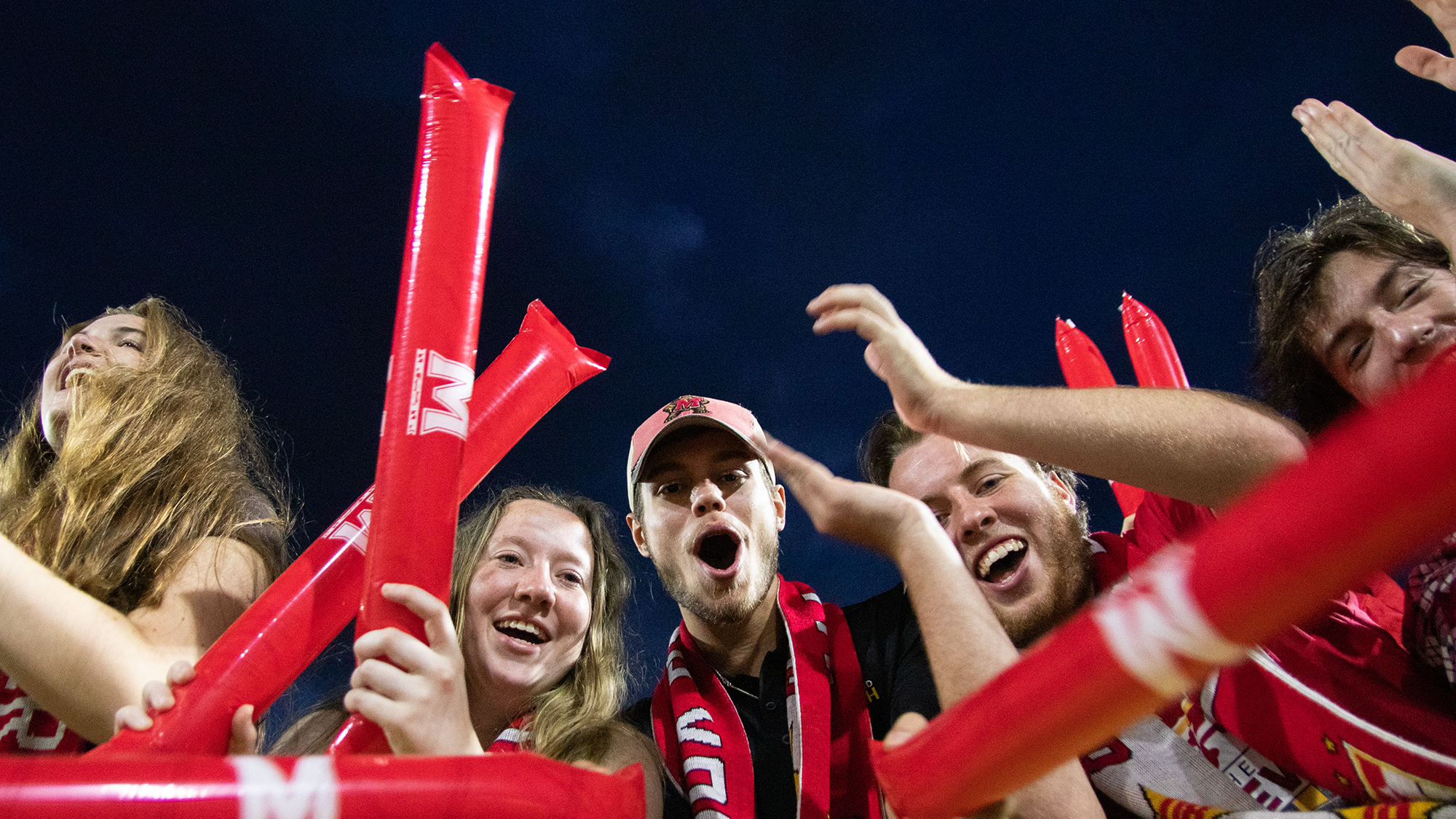 Fans cheer on Maryland women's soccer during their 0-0 draw against Nebraska on Sept. 23, 2021. (Julia Nikhinson/The Diamondback)

This article is part of The Diamondback’s 2021 Family Weekend Guide. Click here for the rest.

School pride is one of the University of Maryland’s fortes, a plethora of traditions and activities take place before home sports games to build up that unmatchable energy.

Joey Monaghan, a senior mechanical engineering major who is part of the Chi Phi Fraternity, said the tradition he loves the most is Family Weekend, a weekend when families of students from around the country visit the campus and get together.

“I get to talk to my friend’s parents that I haven’t met before, which is always fun,” Monaghan said. “My dad always puts together a fun tailgate and I love that week every year.”

This year, Family Weekend will be from Oct. 1 to Oct. 3. The celebration includes a series of events, from a home football game against the University of Iowa to a family festival and barbeque on McKeldin Mall.

The notorious tailgate parties organized before the game are one of the main traditions at this university. Football tailgates occur in multiple places, such as Mowatt Lane Garage, Lot 1B and Lot Z. Some sororities and fraternities also organize tailgates. This university’s Interfraternity Council  and Panhellenic Association  currently hold their pre-game celebrations at the lawn in front of President Darryll Pines’ university house.

Attending the first home football game is a tradition students at this university generally don’t pass up.

Capital One Field at Maryland Stadium came back to life as football season kicked off earlier this month. For many, it was their first time cheering as the Maryland state flag unfurled on top of the student section.

Freshman biochemistry major Isa Wahl said that the first game was an amazing experience for freshmen and sophomores since the pandemic affected the typical sports setting last year.

“I think it is really interesting because we basically just have an extended [freshman] class with new students,” Wahl said.

And one cannot mention fan traditions without talking about our beloved mascot, Testudo.

Neal Dedicatoria Jr., a junior economics major, enjoyed the magical powers of Testudo statues with his whole family before the pandemic.

“On the way to the game there’s that Testudo … the one people don’t know about as much, the one behind the stadium,” Dedicatoria said. “We all go together and we all rub Testudo’s nose for good luck.”

And when it comes to fan traditions, fan organizations often take the cake. The Crew, an organization that supports this university’s men’s and women’s soccer teams, knows all about school spirit. If you purchase one of the group’s scarves for $20, you get free food and drinks at all of their tailgates throughout the season.

Tate Yuen, a sophomore animal science major, said the people who lead The Crew set a terrific atmosphere for the soccer matches.

“[The soccer games are] really fun and the chants are great,” Yuen said.

[Review: ‘Dear Evan Hansen’ isn’t easy to watch, but it’s worth the experience]

As for die-hard fans, we cannot forget the athletes’ parents. Nicole Baran, the mother of Maryland’s wide receiver Jeshaun Jones, said her favorite tradition is Terp Walk. This is when the football team, cheerleading squad and marching band walk to the stadium before every home game. This year the walk started near Lot Z.

“The coaches and players with us walk through,” Baran said. “The band is playing and parents are lining the street and everybody’s cheering, it’s so great.”

Christine Finger, offensive lineman Marcus Finger’s mother, said her most precious celebration was after the first football game against West Virginia University on Sept. 4. Many players went back to the football parent’s tailgate area with their families.

“We just sat around and chilled out with the kids. And, you know, looked at the stars and it was such a beautiful evening, nobody really wanted to go inside,” Finger said.

Michael DeBerdine has two daughters on the field hockey team, Emma DeBerdine and Brooke DeBerdine. The family’s own fan traditions are more on the “techy” side. Michael Deberdine has been sending amusing videos to his daughters before every single game for years. One of them includes a picture of his daughters projected onto the wall while he dances to Pitbull.

“It’s just sort of a way to, to just really make the girls know that … we want them all to be in it for the fun, you know and don’t take yourself so seriously,” DeBerdine said.

And even during the pandemic, fans at this university still found their own creative ways to show support.

Debi Mason, field hockey midfielder and forward Taylor Mason’s mother, said they have one fan who doesn’t have a daughter on the team but has been driving to every game for the past 10 years. He is also their flag bearer during the games.

“When COVID shut down our tailgates, he would go to the practices and sit in the back of his truck to cheer the girls,” Mason said.

Even as sports approach normalcy, new customs keep emerging. In collaboration with the university’s athletic department, Ledo Pizza is sponsoring the men’s football, basketball and lacrosse teams. As a result, Ledo Pizza is serving cheese and pepperoni pizza at every football home game, in sections 10 and 20 of Maryland Stadium.

Ledo Pizza stated on their official website that fans can win a free “Maryland Family” T-shirt if they purchase their eight-inch pizza and a large Pepsi.