Faye Webster will make you feel, laugh and cry 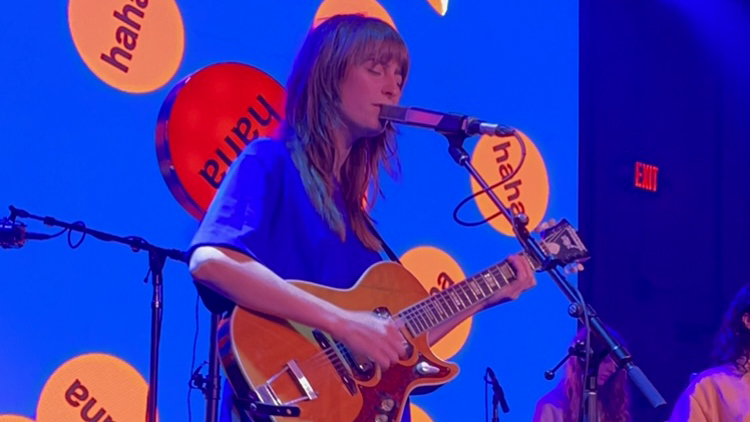 Indie folk singer-songwriter Faye Webster swept Washington, D.C., away with her beautiful, airy voice in Capital Turnaround on Sept. 24. She toured for her most recent album, I Know I’m Funny haha with the opening act Danger Incorporated.

On the downbeat at 8:30 p.m., Danger Incorporated’s sounds swelled throughout the venue as fans listened to their tracks. The rap duo from Atlanta —Boothlord and Louie Duffelbags — played several songs and kept the audience entertained as they waited for Webster for almost two hours.

They ended their act with an iconic track titled “Shut the Fuck Up :’),” which is exactly what you’d expect. The lyrics were predictable but still resonated with a lot of the audience as they cheered over and over again. Danger Incorporated certainly did not disappoint, and I promptly looked up more of their tracks following the concert.

[AOC got political at the Met Gala. The backlash shows it worked.]

Following Danger Incorporated, fans ran to the front of the venue as Faye Webster shyly walked across the stage and opened with “Better Distractions,” the opening track of her album. She effortlessly played her guitar, and the gentle sounds of the steel guitar and bass guitar danced cautiously through the air, pushing fans with it.

Webster played more than the highlights of her discography — and some acts, such as the appearance of professional yo-yo player Joe Wilson, were not something you’d typically see at a concert. Wilson sent everyone over the edge with his amazing talent as he effortlessly wound and released his yo-yo, concluding with the classic “walk the dog” trick.

Fans laughed as Webster played a song from Animal Crossing, one of her favorite games during quarantine, she told the audience. Hearts grew bigger by the second as she charmed everyone with her adorable and incredibly human interests.

One of my favorite tracks, “Jonny,” nearly brought me to tears. She played the love song with tender and vulnerable vocals, serenading the audience toward the end with a virtuosic cadenza of words as tears brimmed.

Just when I thought we had enough heart strings pulled, her band left the stage as she began to strum the same chord sequence on her guitar alone. Silence fell across the crowd as Webster started her next track. “Half of Me” sadly suspended its ballad in mid-air as we sulked over the ending of the concert.

[Are you a hyperpop fan? Thank queer and nonbinary artists]

Webster shyly walked off stage after thanking the audience for coming. But the crowd didn’t want it to end there, begging her to return and play more.

After relentless chanting, Webster’s entire band ran back on stage with cheesy grins as Webster followed. She played us out with “Kingston” as we all cheered with joy. I rode the Metro in peace back to College Park after a meaningful concert of heartbreak, self-care and yo-yoing.

Webster filled Washington, D.C., with an abundance of refreshing sounds. She made us cry and feel, but most importantly, she made us laugh. Did you know she’s funny? haha.