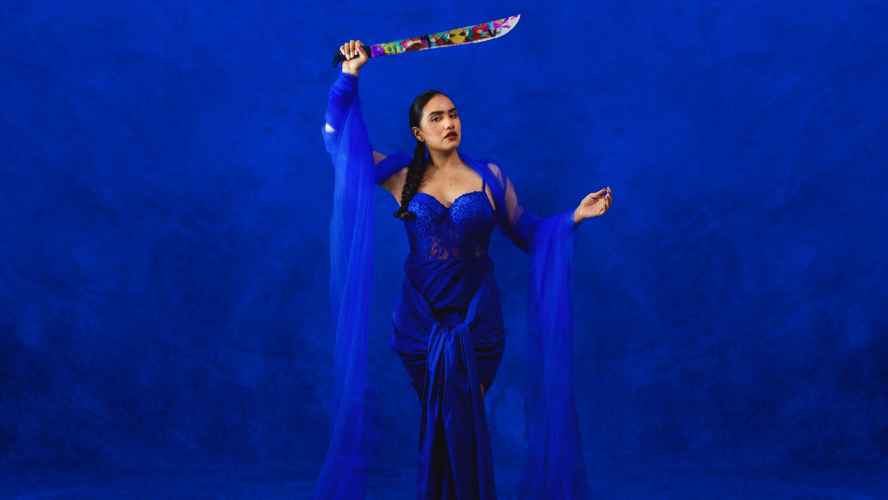 As 16-year-old Cindy Yomaira Zavala was getting ready to participate as a “reina,” or queen, in a festival known as “Carnaval de San Miguel” in her parents’ homeland of El Salvador, when she heard her family friend combine the word “Salvadoreña” with “Reina.”

That’s how the word “SalvadoReina” first came to her mind.

“That kind of sounded like you were saying Salvi-Queen, and so I loved that,” Zavala said.

Little did she know that one day it would become her stage name as a cumbia artist.

Zavala, also known as La SalvadoReina, has built her musical career in the Washington, D.C., area while studying and working full time. She released her first album, Cumbias Amargadas — which translates to Bitter Cumbias — in July after seven years of hard work.

Zavala’s style is called cumbiatón, a fusion of cumbia and música urbano. She said that cumbia has so much to offer, as it is versatile and easy to mesh with other genres.

The album’s title emerged from heartbreak and a lighthearted conversation with her mother.

[Review: The new season of ‘Dear White People’ is creative but lacks quality]

Her mother said she was always acting “amargada,” or “bitter.”

However, Zavala did not want her songs to be limited to love.

“Sometimes female songwriters are always put in this place like … they can only write about love,” she said.

This translates to: My people cross the border/ They cross it every day/ Working hard/ They even burn their skin/ And they have a thousand reasons to be mad/ And we still laugh/ And we still enjoy.

Zavala said she wanted to share the stories of the Salvadoran community in her hometown of Alexandria, Virginia, and how they overcome hardship with humor.

Many members of the Salvadoran community love comedy, Zavala said. She mentioned that it is part of their personalities and culture.

“I think that maybe it is … a way of survival to all the oppression or different struggles that we have,” Zavala said.

Zavala said she wanted to write about immigration because both of her parents immigrated to the U.S. from El Salvador, and that identity is a part of who she is. She admires the way they bring joy and laughter even during tough times.

“A lot of people might see my dad as a carpenter, but he has a whole entire life. He loves karaoke, he has hobbies, he loves soccer … he has a whole other life other than just being an immigrant and a hard worker,” she said.

Zavala’s all-time inspiration is the one and only singer-songwriter Selena Quintanilla. However, the style of Mala Rodríguez – a combination of Spanish-flamenco and rap – motivated her to create music.

Audio engineer Marvin Arbaiza, also known as Madd Maxx, had previously worked with her and attended the event to support her. Arbaiza said he has seen Zavala evolve from a more urban style to cumbia.

“She’s grown to be a more seasoned artist,” Arbaiza said.

Ana Reyes, the co-owner of restaurant El Tamarindo, where Zavala occasionally performs, said she admires how Zavala is unapologetically herself.

“She just seems like a very well-rounded, beautiful spirit and kind of like a go-getter, which is something that we take pride in as Salvadoreñas,” she said.

Zavala performed at El Tamarindo on Sept. 20 and will perform again on Nov. 14, on National Pupusa Day. She does all of this while maintaining a full-time job.

“I feel like sometimes being part of an immigrant family, it’s hard to be in the arts or in the creative [world] because you don’t have the freedom to do that financially,” Zavala said.

Zavala’s advice to aspiring Latinx artists is not the cliche follow-your-dreams, but rather “keep your dream alive.” Build your craft little by little while finding a way to pay the bills.

“If I hadn’t been realistic, while at the same time, being a dreamer, I don’t think I would have finished this project,” she said.