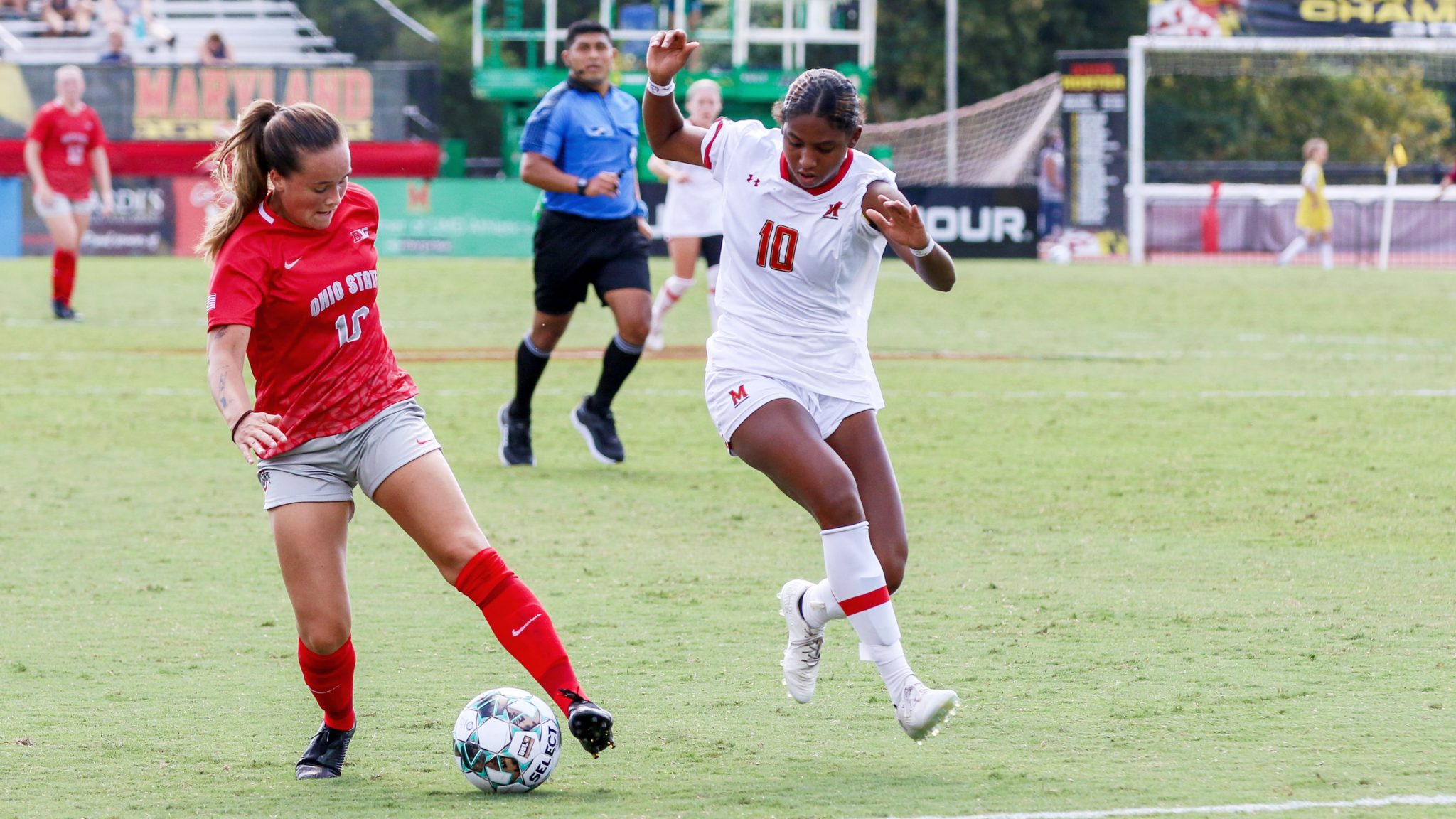 Maryland's Mia Isaac and Ohio State's Kine Flotre battle for the ball in the Terps' 2-1 loss to the Buckeyes on Sept. 19, 2021. (Cam Andrews/The Diamondback)

With the game tied late, Ohio State’s Emaly Vatne found space on the right side of the field, and whipped a cross into the box. Kailyn Dudukovich ran into the box unmarked, and headed the ball down into the bottom corner.

Maryland women’s soccer keeper Madeline Smith had no chance of saving it, and the Buckeyes celebrated retaking the lead in the 89th minute.

The Terps were unable to overcome the late goal, and Maryland fell to Ohio State, 2-1, in its Big Ten opener. Despite the loss, coach Ray Leone was proud of his team’s performance, as it took a late goal for the Buckeyes to beat the Terps.

“We are playing at a high level right now,” Leone said. “So we just got to build on this because from Wake [Forest] to today we were better. Now, we’ve got to be better from today till Thursday.”

Ohio State (6-3, 1-0 Big Ten) dominated the first half, registering 10 shots and five shots on target, while Maryland failed to even get a shot on target.

Keeper Liz Brucia came up with big saves multiple times for the Terps. She was quick to come off her line to pick up through balls the Buckeyes attempted to play in behind the defense.

One of those saves came in the 29th minute, when Kayla Fischer was played in behind Maryland’s defense. Brucia rushed out to cut down the angle and dove to her right to save Fischer’s strike and keep the game scoreless.

But the Terps weren’t able to hold on until halftime. Fischer received a pass out wide before driving in and squaring the ball across the box. Maryland (4-3-2, 0-1) was only able to half-clear the cross, and the ball fell to Christin Baumbick, whose shot deflected into the bottom corner.

Ohio State had a strong chance to double its lead in the 52nd minute. Chloe Delyser was able to take a touch past Smith, who subbed in for Brucia at halftime, but her shot was cleared off the line.

Though the Buckeyes were repeatedly close to doubling their lead, the Terps finally found success on the counter-attack. Keyera Wynn sprayed a great ball out wide to Mikayla Dayes, who beat a defender before whipping a low cross in.

Kori Locksley ran across her defender and met the cross at the near post, with her first-time finish finding the back of the net and tying the game at 1-1 in the 63rd minute.

Maryland had a chance to take the lead nine minutes later after Dayes was able to get behind Ohio State’s defense, but her shot went past the far post.

Smith came in at halftime for Brucia and impressed, notching four second-half saves. The pair totaled eight saves, keeping the Terps in the game despite being outplayed by the Buckeyes.

However, Smith wasn’t able to save Maryland with under two minutes to play, and Dudukovich’s late goal handed the Buckeyes the win, as the Terps remained winless against Ohio State.

While Maryland will be upset to lose so late, the Buckeyes were much more dangerous going forward throughout the match. They notched 19 shots — 10 of which were on target — as opposed to the Terps’ seven shots and two on goal.

Despite being outplayed, Leone was pleased with his team staying in the match and battling against a tough Ohio State side.

“They got a lot of fight,” Leone said. “I think all you need to know is when we go down 2-1 with a minute and a half to go and they get a corner kick, and give it a go, right there, it was amazing. So they’ve got a lot of fight. I’m heartbroken for our team, you know, because they really put it all out there.”