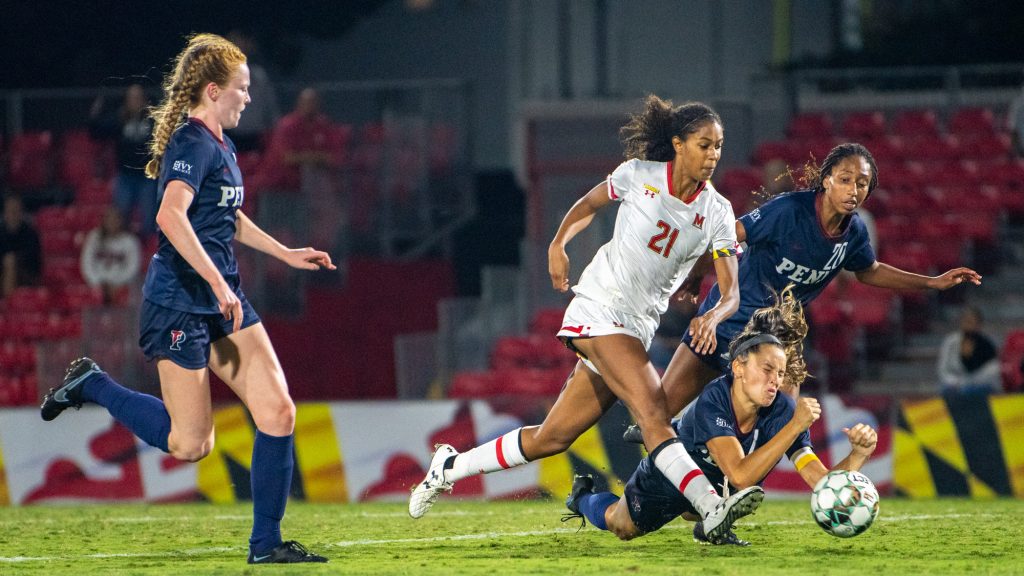 Maryland women’s soccer struggled to create chances against Penn’s defense, with its only goal coming from a free kick just inside half field when Penn’s goalkeeper misjudged Mori Sokoloff’s delivery and only got one hand to the ball as it bounced into the back of the net.

Maryland registered 13 shots and had six of those shots on target against the Quakers, but the Terps rarely challenged Penn’s defense after their opening goal. After the match, coach Ray Leone said he was hoping to see an improvement against Wake Forest.

“We’ve got to get back to playing smarter in the final third,” Leone said. “We were creating a lot of chances, but we’re not making it count, so we need to fix that.”

Then on Sunday, Maryland failed to even register a shot on target against a tough Wake Forest defense, which has not conceded a goal through eight games.

While Leone was satisfied with the Terps’ performance against the undefeated Demon Deacons, he still hopes to see improvement in the attacking third as Maryland heads into Big Ten play next week.

“First we get our legs back because now we get a whole week off to get ready,” Leone said. “But just that final piece, we’re rushing everything.”

The Terps struggled in the spring while playing a schedule of only Big Ten teams. They scored only eight goals in 12 matches, averaging 3.25 shots on target per match.

During its nonconference schedule this season, Maryland has surpassed its attacking output from last year in four fewer games. The Terps have scored 12 goals in eight matches this season and have almost doubled their shots on target, averaging almost 6.4 per match this season.

But Maryland’s offense has stalled in the last week of non-conference play, and the Terps hope to renew their early season form as they begin to navigate their Big Ten schedule.

Along with creating better shots, connecting better in the final third will be crucial for the Terps, as they look to improve upon their record against Big Ten teams last year, which was 0-10-2.

This, they hope, will prove the Big Ten’s preseason poll wrong, which had Maryland picked last out of 14 teams.