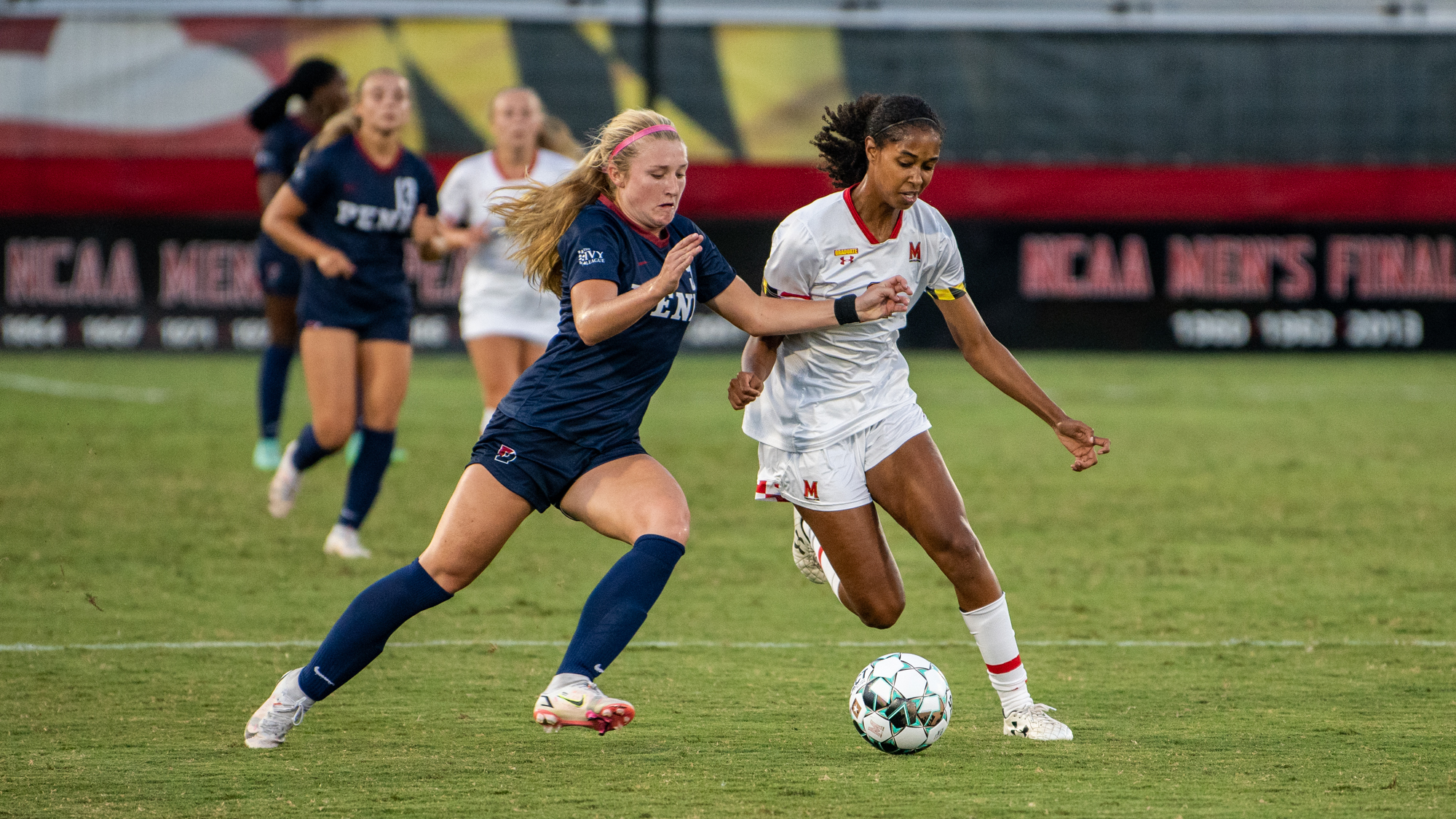 Kori Locksley battles with a defender for possession during Maryland women's soccer's 1-1 draw with Penn on Sept. 9, 2021. (Joe Ryan/The Diamondback)

As Anna Carazza attempted to clear the ball, Wake Forest midfielder Nikayla Small jumped in front of her and blocked the clearance.

The ball fell to Lauren Tangney inside Maryland women’s soccer’s penalty box and she calmly finished past goalkeeper Liz Brucia to give the Deacons an early lead.

The goal would be enough to beat the Terps, as Ray Leone’s squad was unable to breach a Wake Forest defense that has not conceded a goal in eight games this season.

The 2-0 loss was Maryland’s second of the season, dropping the Terps to 4-2-2 after their final non-conference game of the campaign. Despite the tough loss, Leone was pleased with his team’s effort.

“It was a great game against a really fantastic Wake Forest team,” Leone said. “I thought we measured up [to them]. It was unfortunate to go down a goal because it was really tight… but I’m proud of the team’s effort and performance.”

The matchup started slow with both sides failing to register a shot on target until Tangney gave the Deacons the lead in the 21st minute, notching the first goal of her collegiate career.

Maryland struggled to put anything together going forward, with its best chance of the half coming in the 41st minute. Catherine DeRosa whipped in a free kick over the Wake Forest defense and Toni Domingos shed her defender. However, the freshman’s header went over the crossbar.

Both sides registered four shots in the first half, but the Deacons’ goal was the only shot on target between either side with both teams struggling to connect going forward.

Goalkeeper Madeline Smith replaced Liz Brucia at halftime and impressed just as she did against Penn on Thursday. The Omaha transfer looked comfortable in goal, making three saves in the second half.

“We’re very fortunate we have two goalkeepers that are both fantastic and both experienced,” Leone said. “They are both playing at a top level right now, and this was a great performance today for both.”

The Terps were disappointing going forward again in the second period, with their best chance coming from a long strike by Zora Jackson that went wide of the post.

The Deacons doubled their lead late in the 87th minute, as Jenna Menta finished a service from Sophie Faircloth to secure another win for 8-0 Wake Forest.

Maryland failed to get a shot on target throughout 90 minutes as the Deacons’ dominant defensive performance stifled the Terps falling to an old ACC rival.

Maryland will hope to improve its offensive production when it begins its Big Ten schedule next week, taking on Ohio State on Sunday.

“[It’s important] for us to get our legs back because now we get a whole week off to get ready,” Leone said. “But just that final piece, we’re rushing everything, and I think the tape will show them that.”