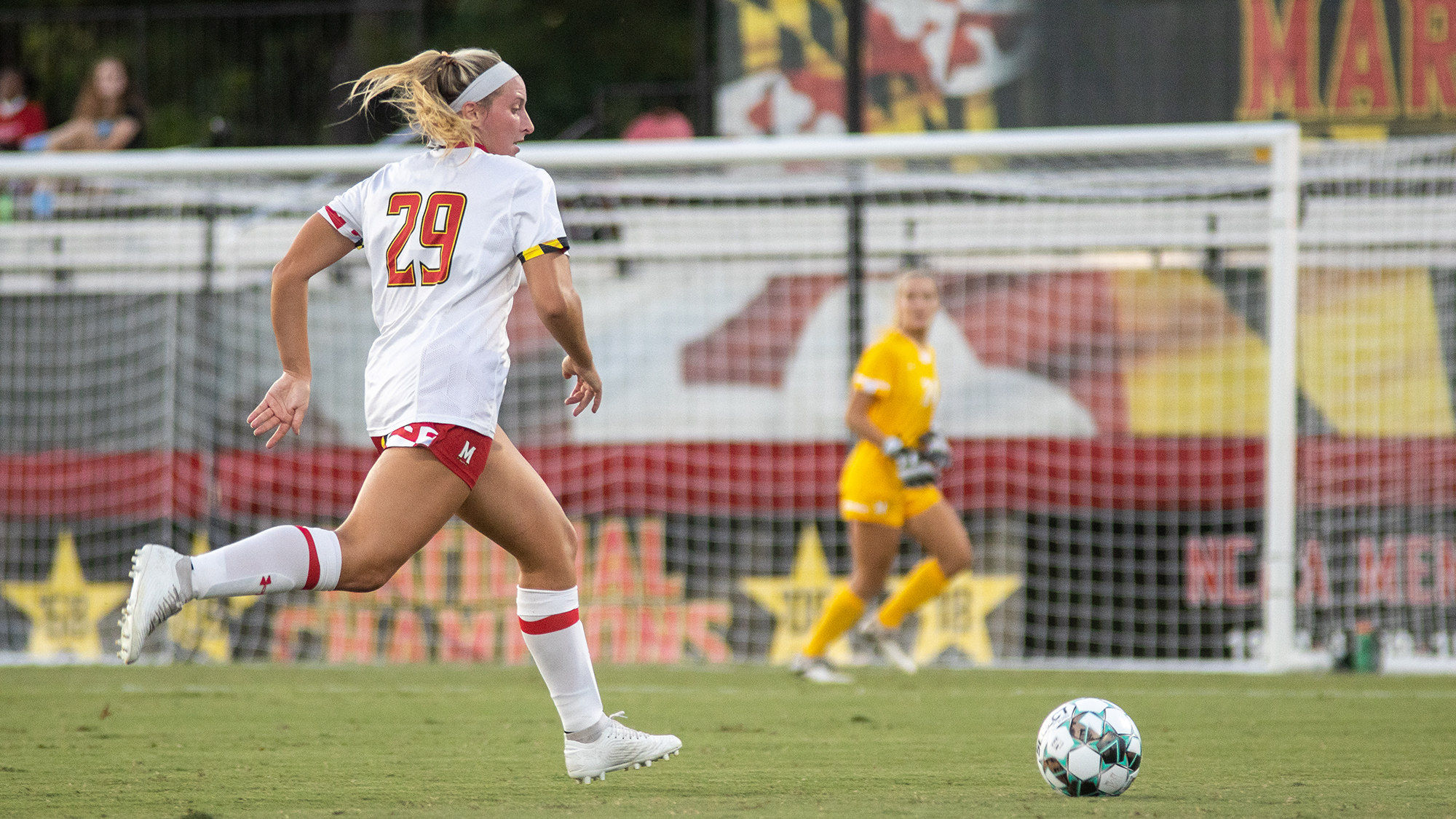 As a header looped over goalkeeper Liz Brucia, defender Olivia Hicks got back and cleared the shot off the line, preserving Maryland women’s soccer’s clean sheet in its 0-0 draw with Saint Joseph’s University.

The clean sheet capped off a positive week for the Terps’ defense, which only conceded once in its two games against George Washington University and the Hawks. The backline also only surrendered five shots on target across the two games.

Last season, Maryland conceded 29 goals in 12 games, averaging 2.42 goals against per game. So far this season, the Terps (4-1-1) have only conceded five goals in six games and have kept three clean sheets.

And players are aware of what has brought about this massive improvement.

“Communication has been a big part of why we’re so strong this year,” Hicks said. “We’ve all done our parts and covered for each other and just picked up each role, and when one is out of the picture, we always have someone behind us to step in.”

The Terps’ defense connected quickly. Neither Hicks, Adalee Broadbent, Malikae Dayes nor Zora Jackson started more than six games last season, as many players struggled with injuries or even featured in other positions on the field.

However, Maryland was able to keep clean sheets in its first two games of the season.

Since then, the Terps’ backline has had plenty of time to develop chemistry. Hicks, Broadbent and Brucia have played every minute of the season so far. Dayes has also played for all but 10 minutes this season, hitting the bench during the double overtime draw with Saint Joseph’s.

Brucia, a University of Georgia transfer, has adapted quickly and staked her claim as Maryland’s starting goalkeeper. After only racking up five starts in her four-year career as a Bulldog, the graduate student has started all six games for the Terps so far, keeping three clean sheets.

Coach Ray Leone is excited with how his new look defense has come together.

“We really can’t ask more of what they’ve been doing,” Leone said. “They’ve really improved. And it’s a group, it’s really a collective effort. So, I’m really liking what they’re bringing to the table.”

Maryland will look to continue its early success in the defensive third as it wraps up its nonconference schedule this week against the University of Pennsylvania and Wake Forest University.

Both the Quakers (2-1-1) and the Demon Deacons (6-0) have shown off strong attacking performances so far.

Penn has scored in every contest so far and Wake Forest has scored multiple goals in five straight games, including a 5-0 thrashing of Youngstown State.

Broadbent still thinks Maryland has a lot it can improve on as it heads into its final week before Big Ten play, despite satisfaction with the team’s performance so far.

“I think we have really good moments in the game and we start out pretty strong,” Broadbent said. “I think we just need to stay calm, cool, collected throughout the entire match, complete our easy final third passes and, honestly, we just need to finish a little bit better.”