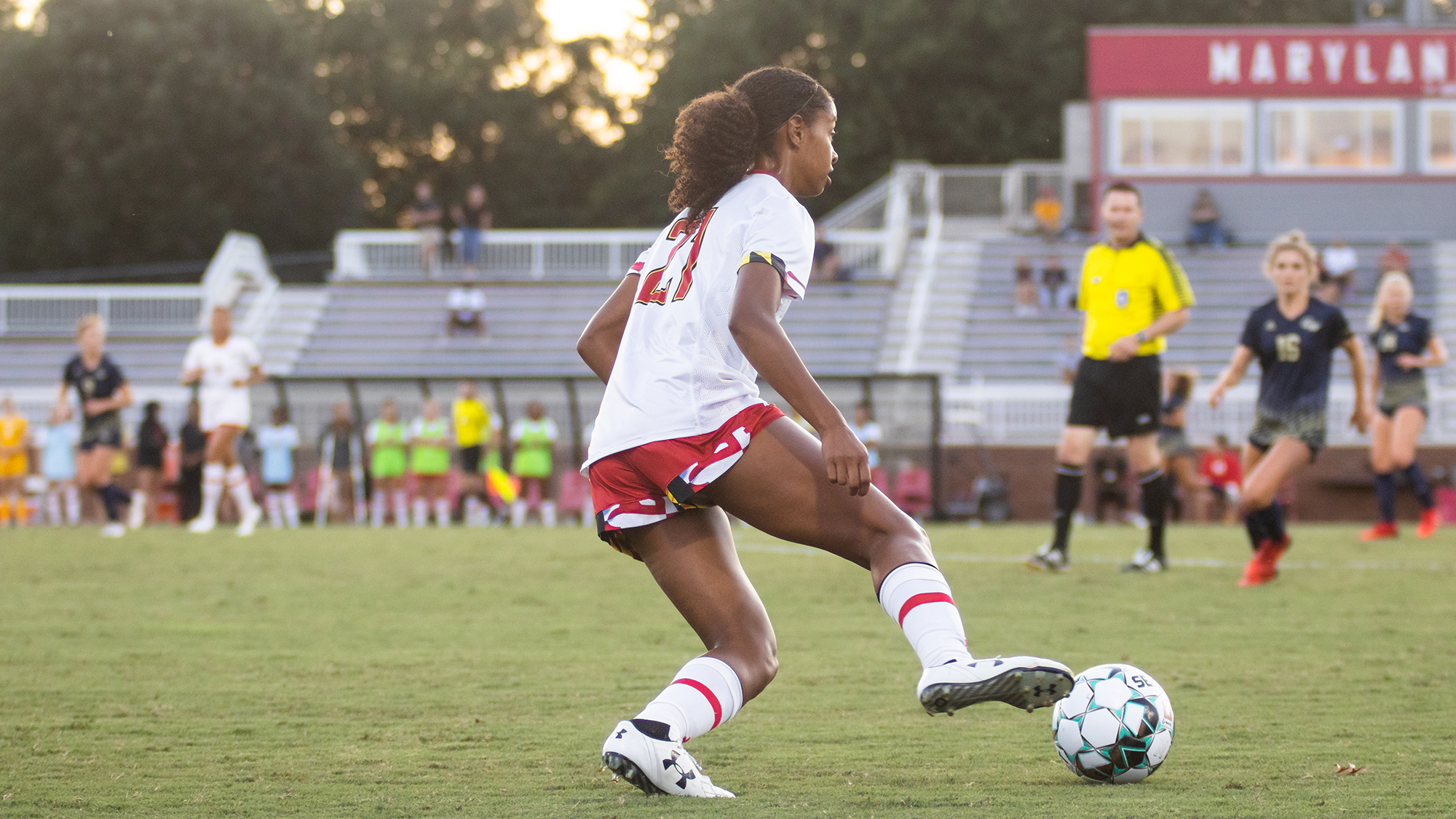 Despite dominating for a majority of the game, Maryland women’s soccer was under a lot of pressure at the beginning of the second half.

Rachel Brown was played in behind the Terps’ defense and had a great chance to score for Saint Joseph’s. But goalkeeper Liz Brucia was able to make a great save to keep the game level.

Minutes later, Brown again threatened Maryland’s goal. But as her header looped over Brucia, Olivia Hicks was there to clear the shot off the line.

“She saved the game right there,” coach Ray Leone said. “That’s three points the other way if she doesn’t commit. That’s great fight, and that’ll definitely be highlighted throughout the week.”

Despite the Terps’ defense stepping up when needed, they were unable to finish their own chances. Maryland notched 19 shots, with 11 of them being on target, but all were saved by the Hawks’ Katie Cappelletti en route to a 0-0 draw.

The Terps were without multiple key players Sunday, including forwards Alyssa Poarch, Kori Locksley and Emily McNesby, as well as midfielder Hope Lewandoski. Leone said he is hopeful the bunch will return soon.

Though missing a group of talented attacking-minded players could explain their offensive struggles, it seemed they’d have success early.

Maryland’s pressing was paying off in the game’s opening minutes, as the Terps were able to win the ball back high up the field multiple times throughout the first half. But while Maryland was able to create some shots, it failed to create many quality chances.

The Terps’ best look of the first half came in the 35th minute. Mikayla Dayes drove past multiple defenders before having her shot blocked inside the box. The ball fell to Olivia Reese at the corner of the goal box, but the sophomore had her shot saved by Cappelletti at the near post. The follow-up try was also saved by the goalkeeper.

The game was scoreless at halftime, despite Maryland outshooting Saint Joseph’s 9-2 in the first 45 minutes.

The Hawks nearly took the lead in the 55th minute, but Brucia made a great stop on Brown’s shot to keep a clean sheet. While the goalkeeper only made three saves to Cappelletti’s 11, the graduate kept her third clean sheet in six games and impressed Leone.

“She is getting stronger and stronger and getting more chemistry with the backline,” Leone said. “Today was a big time challenge, and she was up to it every step of the way, so it was really exciting. I mean you can be disappointed in the result and still recognize a special, special performance, and that’s what we got from Liz today.”

Saint Joseph’s kept up the momentum and almost broke through again in the 66th minute after Brown’s header from a long throw-in looped over Brucia. But Hicks was there to clear the shot off the line and keep the game tied.

The Terps grew into the game late, and Toni Domingos had a strong chance to score her first career goal in the 77th minute. However, her shot was tipped over the bar by Cappelletti.

Shots from Dayes and Zora Jackson in the final minutes of regulation were also saved by Cappelletti, and Maryland headed to overtime for the first time this season. The Terps doubled up the Hawks in shots throughout the first 90 minutes but couldn’t break through.

Both sides were able to create chances in overtime but only combined for one shot on target throughout the 20 minutes, as the game ended in a scoreless draw.

Maryland just couldn’t finish on the day and will be disappointed to only draw a Saint Joseph’s side that is winless and that has failed to score so far this season. While Leone hoped for the Terps to do more against the struggling Hawks, he was able to take positives from the match.

“To get four points in a weekend, that’s a good thing,” Leone said. “Everybody on the team knows we could have done better today, but you get a point, you move on, and then you try to improve next week.”