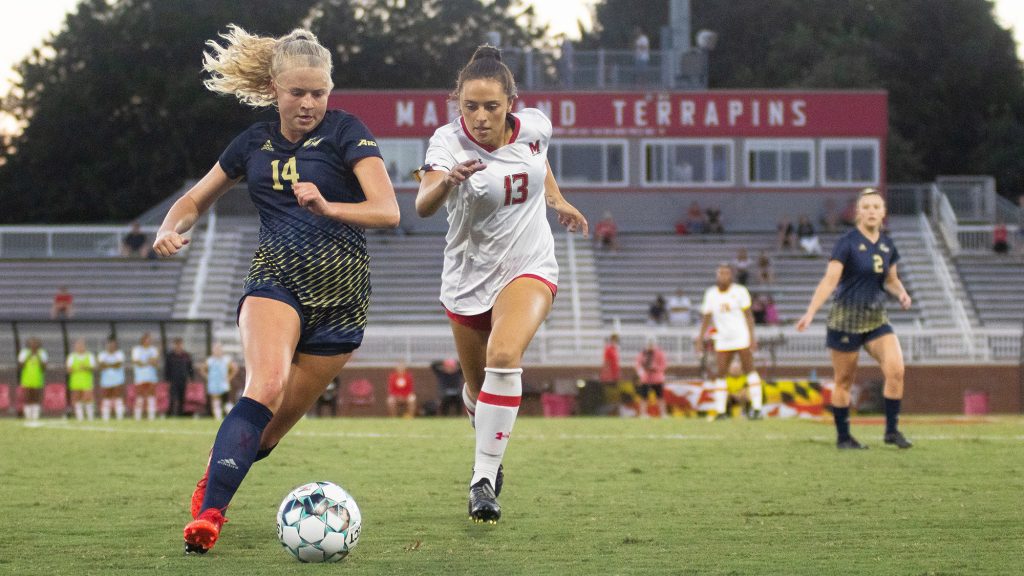 Kori Locksley made a driving run from midfield, shrugging off her defender. The Auburn transfer misplaced her pass, but Olivia Reese blocked a George Washington defender’s clearance.

The ball fell to Emily McNesby around the penalty spot, and the senior made no mistake, placing her first-time strike into the bottom corner.

“It was good from coming down a goal and their play tonight was much better,” Leone said.

Maryland improved to 4-1 with the win, and were able to remain undefeated against George Washington at Ludwig Field, now boasting a 7-0-1 record over the Colonials.

The Terps found themselves down early, conceding in the 10th minute. After giving up possession in their own half of the field, Abby Manssor found Sophia Danyko-Kulchycky at the top of the penalty box. The forward fired it over goalkeeper Liz Brucia to give the Colonials an early lead.

Hope Lewandoski tied it up for Maryland in the 25th minute. Mikayla Dayes almost caught Tamaki Machi off her line, and she could only parry it away as far as Lewandoski. The graduate student took two touches before her shot crept into the bottom corner off the hands of Machi.

“I think I kind of manifested it to go into the back of the net,” Lewandoski laughed.

Maryland dominated shooting in the first half, outdoing the Colonials 11-2, but George Washington was able to score with their only shot on target.

Dayes almost extended Maryland’s lead back out of the gate in the 52nd minute. The forward made a great move to beat her defender and get in behind the Colonials’ defense, but her shot was well saved by Machi.

The Terps finally doubled its lead in the 67th minute. Olivia Reese weighted a lofted pass perfectly to Madison Oracion, who shifted the ball onto her right foot before beating Machi from outside the penalty box.

George Washington was inches away from getting back into the game and scoring its second goal in the 78th minute, but Danyko-Kulchycky’s free kick hit the post and the Maryland defense was able to clear the ball away.

The Terps were unable to capitalize on more late chances but had already amassed a lead good enough to earn a win.

Reese impressed in her first appearance of the season as the sophomore notched two assists. But she wasn’t the only Maryland player to make a debut, as Milan Pierre-Jerome, Alexis Hogarth and Mori Sokoloff also made their first appearances for the Terps this year. Leone couldn’t have been happier with Reese’s performance.

“She’s a fantastic passer,” Leone said. “She plays with her head up and the weight of her passes were perfect, so I’m happy for her.”

Reese was also ecstatic to contribute to the team for the first time this season.

“It feels really good,” Reese said. “I’ve been waiting to play so I’m excited that I could get two assists, we had a good game tonight.”

Maryland will be excited to see its offense bounce back after struggling to finish against Navy, as the Terps generated plenty of chances with 22 shots and were able to score three goals against George Washington. Only No. 3 Virginia put more goals past the Colonials’ defense this season.

Leone was also happy to see his team bounce back from their first loss of the season to Navy last Sunday.

“This was the first chance to rebound from a loss, and they really came out strong and did a nice job tonight.”