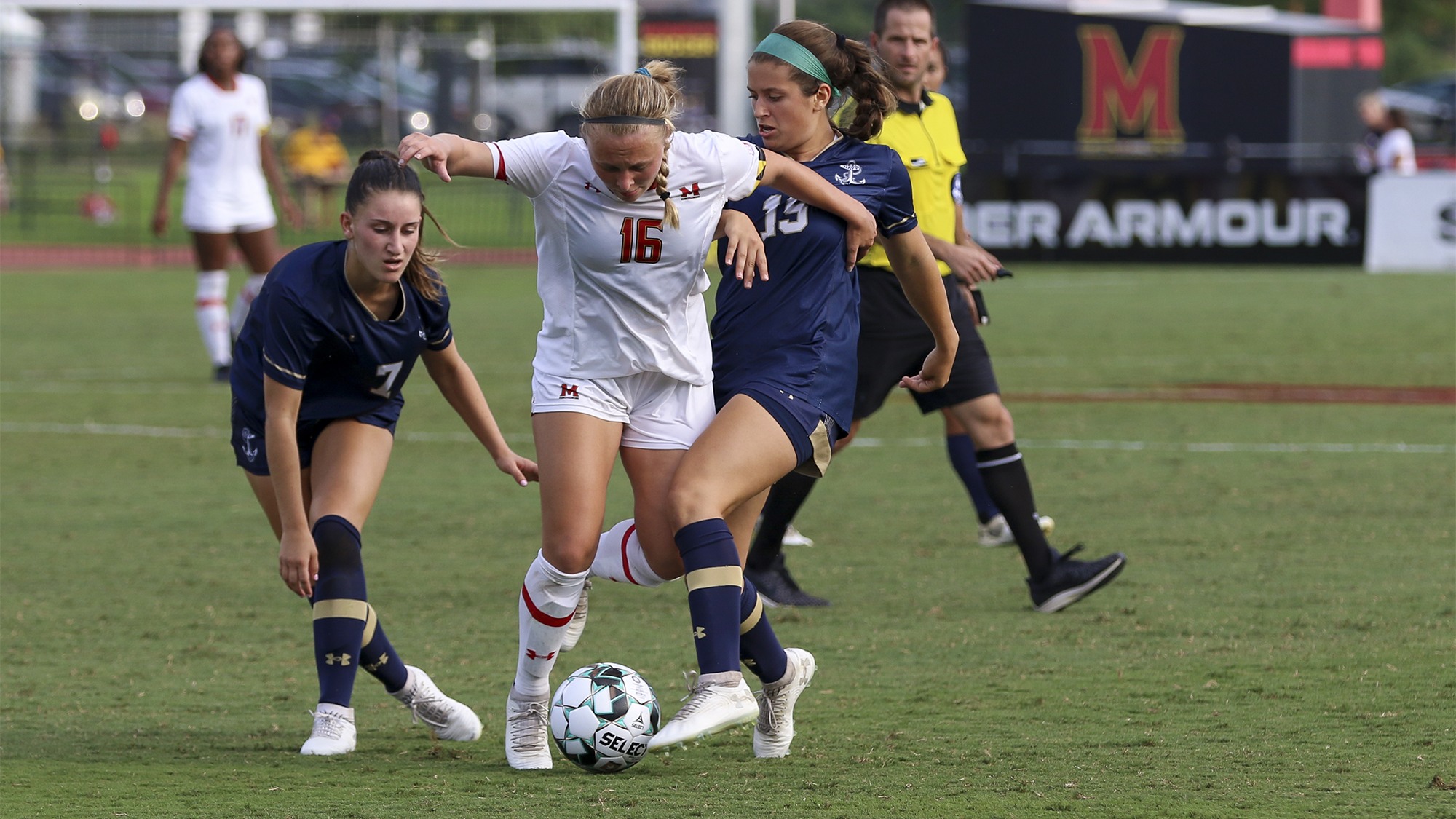 Maryland women’s soccer got off to a disappointing start Thursday against Richmond, conceding a header from a throw-in not eight minutes into the game.

The opposite was true on Sunday against Navy when forward Mikayla Dayes found the back of the net 44 seconds into the game, notching her first goal of the season and giving the Terps an early lead.

However, the results of both games were different. The Terps came back from an early deficit to win against Richmond, and failed to capitalize on multiple chances in the second half against Navy.

Despite mixed results, coach Ray Leone was satisfied with the team’s response while trailing in both matches.

“We saw a lot of fight when we went down,” Leone said after the loss to Navy. “We did against Richmond, but I think more so tonight, where Navy played extremely well, and we fought our way back in there and just couldn’t get a goal.”

Maryland was slow to get back into the game against Richmond after a poor first half in which the team only registered one shot on target.

But in the 69th minute, an Adalee Broadbent blast from about 35 yards out tied it up for the Terps. Midfielder Catherine DeRosa sealed Maryland’s third straight win with a penalty kick five minutes later.

On Sunday, Maryland surrendered its early lead against Navy, allowing an equalizer in the first half before going down in the 52nd minute on a strike from Navy’s Caitlin Doran.

Midfielder Loren Sefcik struck the post just seconds later, and forward Toni Domingos put a shot just past the near post shortly after. But the Terps remained trailing by a goal.

Even after giving up a third goal, Maryland continued to create chances. Sefcik found midfielder Hope Lewandoski with a chipped pass over Navy’s defense, but Navy’s goalkeeper saved Lewandoski’s volley.

Despite outshooting Navy 19-11, including 12 shots in the second half, Maryland failed to find the back of the net after the first minute.

While the Terps don’t want to be in losing situations, they’re proud of their responses in both games.

“When we were down, we still kept going,” Dayes said. “Last season … our energy would go down, but this year our energy is staying up, so that’s good.”

Maryland’s 2-1 win over Richmond was its first comeback win since its 2-1 victory against Purdue in 2019. Although Maryland squandered an early lead and couldn’t come back against Navy, Leone’s squad was encouraged by the opportunities they created in the second half.

“[The loss against Navy] is obviously very disappointing, but we know that by our response we generated a lot of chances,” Broadbent said. “That’s a positive thing that we can take away from the game and we’ve just got to put this one in the rearview mirror and move forward.”