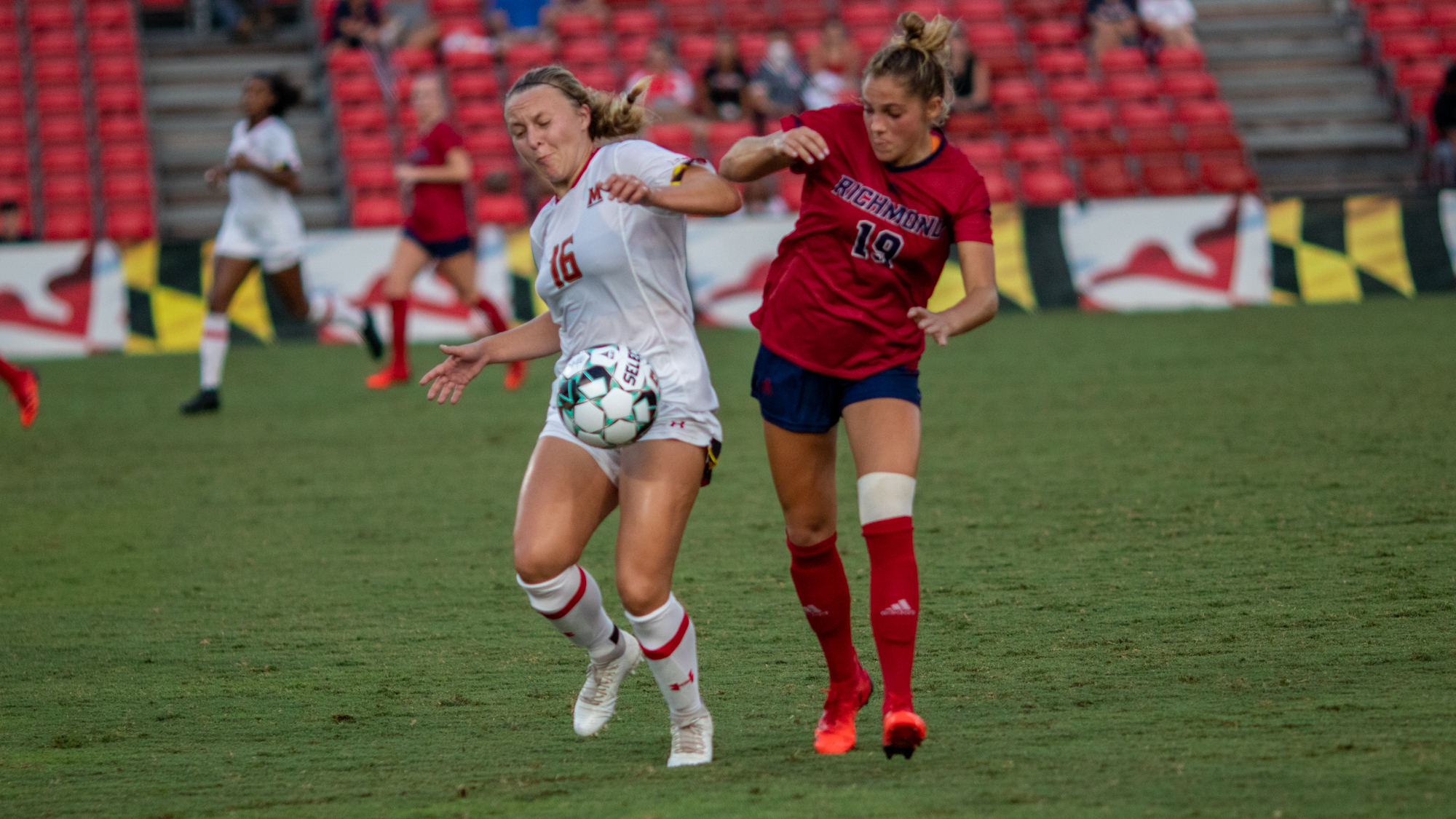 Maryland's Loren Sefcik battles with Richmond's Elle Dziadzio for the ball in the Terps' 2-1 win over the Spiders on Aug. 26, 2021. (Joe Ryan/The Diamondback)

With her team trailing by a goal, Adalee Broadbent intercepted the ball as Richmond tried to counter-attack. The Maryland women’s soccer defender then took a few touches before firing a shot from 35 yards out off the bottom of the crossbar and into the back of the net to tie the game at 1-1.

Five minutes later, Toni Domingos intercepted an errant back pass before being taken out by the Spiders’ goalkeeper, earning a penalty for the Terps.

“I practice penalty kicks all the time so it was all confidence,” DeRosa said. “I knew I was gonna tuck it away.”

With the win, the Terps advanced to 3-0 for the first time since 2017, when they went undefeated in non-conference play.

Despite the win, Maryland’s first half performance was worrying for coach Ray Leone.

“[The first half] was disappointing,” Leone said. “It just was not sharp, I didn’t like anything really about it, and they had to snap out of it.”

Richmond got off to a quick start after Jessie Prillaman headed in Gianna Lucchesi’s flick from a long throw in the eighth minute. Mikayla Dayes came close to tying it up in the 19th minute but put her shot just past the near post after beating multiple defenders.

The Terps went into halftime down 1-0, failing to connect passes and only managing to register one shot on target. Maryland’s offensive struggles were largely due to the absence of top scorer Alyssa Poarch, who missed the game with an injury.

But the Terps turned it around in the second half. Broadbent tied the game in the 69th minute. After making an interception near midfield, the defender took a few touches before firing a shot from 35 yards out into the top corner.

“It was just an awesome feeling,” Broadbent said. “I had a touch that was right in front of my feet and just launched it, so it felt great.”

Maryland earned a penalty five minutes later after Domingos intercepted a poor back pass and got taken out by Spiders’ goalkeeper Claire Hinkle.

DeRosa stepped up and buried it into the bottom right corner, scoring her first career goal and giving the Terps the winning strike.

The win is Maryland’s first after conceding first since a 2-1 win against Purdue in 2019, when two second half goals from Dayes and Loren Sefcik gave the Terps a win at Ludwig Field. While Leone wasn’t pleased with Maryland’s early performance, he couldn’t have been happier with how the team responded.

“They just fell down and were resilient tonight, so I’m really proud of their response,” Leone said. “This was the real first test for our team of adversity. When you play a team that hasn’t played in 10 days, what are we going to do when we go down a goal? Well, we just showed it, so that was a good response.”