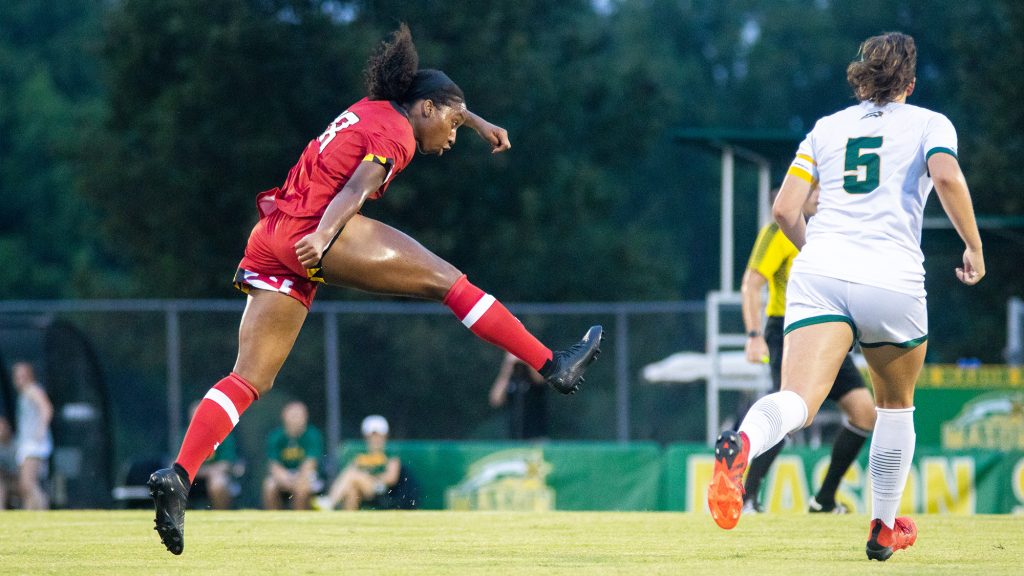 Maryland women’s soccer struggled offensively during its spring 2021 season. After the Terps finished their final of 12 games, they had a measly eight goals.

But scoring hasn’t been a problem in their young season.

Maryland has already scored five goals in just two games thanks to its plethora of attacking options, including new additions, offensive stalwarts and players adjusting to new roles, getting off to a hot start.

While some players may struggle to transition and get used to a new team after transferring, that hasn’t been the case for Kori Locksley. The Auburn transfer already knew a number of players on the team, making it relatively easy for her to fit right in to coach Ray Leone’s squad.

“It was a pretty smooth transition,” Locksley said. “Even players such as Emily [McNesby] and players who’ve been here on the team that I haven’t known, they’ve been extremely welcoming to me, and just have included me in every single facet of the team … It’s been really enjoyable for me so far.”

That early chemistry has allowed her to hit the ground running, notching a goal and an assist in her first two games for the Terps.

Alyssa Poarch has been the standout in Maryland’s offense for years. And 2021 is already proving to be a stronger season, matching her output of the spring, with two goals and an assist.

She had ample chances to surpass her goal total from last season, but a few of her chances missed by a hair, hitting the post and the crossbar against George Mason. But, Poarch finally found the back of the net in around the 73rd minute of her matchup with the Patriots, cementing a win for the Terps on the road.

If Maryland’s offense is to continue its early success, Poarch will certainly be one of the main reasons why.

Another notable performer in the Terps’ revamped offense has been Emily McNesby. After playing outside back last year, the senior has moved up the field into her more natural attacking position and impressed, scoring a 35-yard chip in Maryland’s season-opener against Temple before adding an assist at George Mason.

The Terps are in a good spot to continue their offensive success when they host Richmond on Thursday, meeting a Spider squad that let eight goals past in their season-opening 8-0 loss to No. 4 Virginia.

Maryland has also been solid defensively, starting the season with two straight shutouts. The Terps didn’t even allow a shot on target in its season opener against Temple.

Another player that’s impressed in Maryland’s backline is Zora Jackson. Unlike McNesby, the sophomore was initially used as an impact substitute on offense at the beginning of last season before earning more minutes in the backline. She’s now starting at left back, and Leone has been happy with her start to the season.

The Terps will look to continue their winning start against Richmond, hoping to advance to 3-0 for the first time since 2017, when Maryland went undefeated in non-conference play.

McNesby believes the team can continue its good run of form.